Increase the sale of the OmniCorp drones at all costs and to ignore the governmental warnings.

Defeat and kill RoboCop by any means he can.

Raymond Sellars is the main antagonist of the 2014 film remake of RoboCop.

He is the corrupted CEO of OmniCorp and depicted as a cruel and merciless businessman who serves as the arch-rival of Alex Murphy; as Sellars' nefarious agenda had effectively staged the events of Murphy getting killed and becoming the crime-fighting police cyborg known as "Robocop". He is the counterpart of Richard Jones.

He was portrayed by Michael Keaton, who also played Beetlejuice in the 1988 film of the same name, Ken in Disney/Pixar's Toy Story 3, Peter McCabe in Desperate Measures, Vulture in Spider-Man: Homecoming, Carter Hayes in Pacific Heights and Chick Hicks in Disney/Pixar's Cars.

Sellars serves as the CEO of OmniCorp, and he supervises the transformation of the injured Officer Alex J. Murphy into the crime-fighting cyborg RoboCop. Although he does not bear any genuine malice against RoboCop initially, he gradually sees him as less of a man and more of a product. He is eventually shot to death by Murphy on the rooftop of the OmniCorp headquarters in downtown Detroit during a climactic showdown.

Sellars was an intelligent and very savvy businessman. He was canny and sneaky in his approach to dealing with people and he was also shown to be extremely ruthless in dealing with anybody who opposed him. However, he was not malevolent at first. Initially Sellars was more of a typical corporate executive, simply wanting to sell his company's products to the American government but as he increasingly toyed with Murphy's free will to make him perform better, he lost more and more of his morality and eventually decided to murder him. 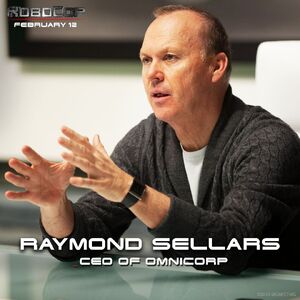 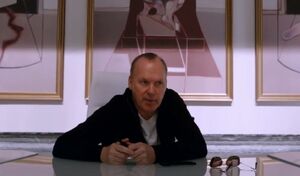 Retrieved from "https://villains.fandom.com/wiki/Raymond_Sellars?oldid=4274236"
Community content is available under CC-BY-SA unless otherwise noted.