Raynald of Châtillon is one of the two main antagonists (along with Guy of Lusignan) in the 2005 film Kingdom of Heaven.

He was portrayed by Brendan Gleeson, who also played John C. McCloy in Mission: Impossible II and a disguised Barty Crouch Jr. in Harry Potter and the Goblet of Fire.

Raynald is a powerful French nobleman who is associated with the Knights Templar. He possesses a fanatical hatred for Muslims and will look for any excuse to slaughter them, even if he has to make one up. When he is introduced, Raynald is being charged by the count of Tiberias, the sheriff of Jerusalem, with attacking Saracen caravans, but is ultimately let off as the sole survivor of the raid is considered an unreliable witness. Raynald mocks Tiberias, claiming he is untouchable, and leaves, looking smug.

He later accompanies his partner-in-crime, Guy of Lusignan, on another raid, with the excuse that the caravans were armed (likely due to his earlier predations). They massacre the Saracens, with Raynald smiling psychotically the whole time. Once again, he is arrested and charged by Tiberias and brought before Baldwin, the king of Jerusalem, but again, there is no definite proof of his misdeeds, and he is once again let off.

When the Saracen king, Saladin, musters an army and marches toward Raynald's stronghold at Kerak, Baldwin manages to negotiate a brief ceasefire with him, promising to punish Raynald. He makes good on his promise by forcing Raynald to grovel and kneel before him, kiss his leprosy-covered hand, and then slaps him a few times with a riding crop before ordering Raynald's arrest, planning to have him executed. Unfortunately, Baldwin dies before the execution can be carried out, and Guy—who succeeds Baldwin as king of Jerusalem due to being the husband of Baldwin's sister Sibylla—has him released, telling Raynald to "give [him] a war." Raynald does this by attacking and massacring yet another Saracen caravan, then raping and killing Saladin's sister, who happened to be among the Saracens.

At Raynald's insistence, Guy musters an army of Crusaders to battle the Saracens and leaves the safety of Jerusalem. However, they travel a long distance without any water, and they soon become weakened from thirst and the blistering heat; Raynald himself empties his water canteen by drinking some and then pouring the rest on his head. At the subsequent battle at the Horns of Hattin, the Crusader army is annihilated. Raynald and Guy are captured.

Saladin gives Guy a goblet of iced water to quench his thirst, but Guy gives it to Raynald, who promptly drinks the water and stands arrogantly before Saladin. When Saladin points out that he did not give the cup to Raynald, the latter calmly confirms this, not showing an ounce of humility or remorse for his actions. Saladin takes out a dagger and slits Raynald's throat. As Raynald chokes from the grievous wound, Saladin's guards grab him, drag him out of Saladin's tent, and hold him down. Saladin then draws his sword, approaches a terrified Raynald, and decapitates him.

His severed head is later impaled on a spear and left to rot.

Raynald being tried by Tiberias for his crimes.

Raynald about to attack a Muslim camp alongside Guy of Lusignan.

Raynald being arrested by Tiberias.

Raynald in his cell, ordering Guy to kill Balian.

Raynald mocking Saladin by drinking from his goblet of water without permission.

Raynald after having his throat slit by Saladin. 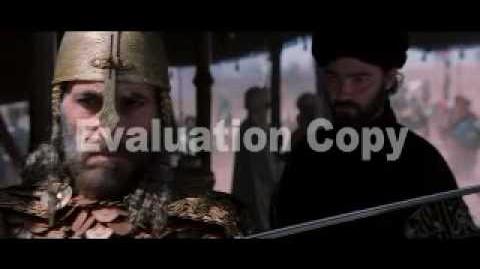