Member of the Subspace Army (in Super Smash Bros. Brawl)

Rayquaza (in Japanese: レックウザ, Rekkuuza), also known as the Sky High Pokémon, is a dual-type Dragon/Flying legendary Pokémon that resides above the ozone layer, which made his existence debatable until it was recently discovered, and serves as an antagonist in several of his appearances. His ability known as Air Lock prevents the weather from being altered.

It was voiced by Katsuyuki Konishi in Pokémon: Destiny Deoxys and Super Smash Bros. Brawl, and Kiyotaka Furushima in Pokémon the Movie: Hoopa and the Clash of Ages.

Rayquaza appears in the 7th Pokémon film Destiny Deoxys as the main antagonist. Just like most other featured legendary Pokémon, this Pokémon proved to be extremely powerful. It fights against Deoxys because it is seen as invading its territory.

After a destructive battle over a glacier witnessed by Professor Lund, Yuko, and Lund's son Tory, and although it takes a few Psycho Boosts and is critically hit and falls into the freezing ocean, Rayquaza comes back and defeats Deoxys with a Hyper Beam attack.

Four years later, Deoxys manages to regenerate, and it goes to find its friend, another Deoxys. Rayquaza senses its presence and goes to LaRousse City to battle Deoxys again. After LaRousse City has been evacuated, Rayquaza manages to break through Deoxys's city-wide barrier after many failed attempts. Then, Rayquaza and Deoxys have a second spectacular battle that destroys some of the city. After Deoxys finds its friend and helps fight off the malfunctioning security bots, Rayquaza realizes that Deoxys is not hostile and stops attacking.

It (or possibly another of its species) also has a cameo in the opening to the 9th Pokémon movie and is captured by Team Rocket. Its current status is unknown, but it is possible that it flies around in the atmosphere (assuming that it managed to escape from Team Rocket).

In Super Smash Bros. Brawl, Rayquaza appears in the Subspace Emissary mode as a boss. After Diddy Kong lands on a mysterious island, Rayquaza lunges out of the water and snatches him, furious from being disrupted. A ship suddenly crash-lands and smashes onto the beach, and out jumps Fox, who deflects Rayquaza's Dragon Pulse back at it. Rayquaza collapses into the water, but not for long until it launches back out, engaging in battle between Fox and Diddy. Rayquaza fights with strong electrical attacks, digging underground, causing explosions that come out of nowhere, and ramming into its opponents. Eventually, Rayquaza was defeated by Fox and Diddy Kong. Later, it is fought in the Great Maze level again and can be fought in the Boss Battles after the storyline is beaten. It has been hinted that Rayquaza is in league with the Subspace Army. It is also unclear why Rayquaza was in the lake, when Rayquaza is always known as the Sky High Pokémon, but it is implied that this Rayquaza isn't actually the real Rayquaza, but is simply a figure breathed into life by Master Hand. It also appears as a collectible trophy as well.

In Super Smash Bros. for Wii U, Rayquaza appears as a stage hazard for the Kalos Pokémon League. When the stage shifts to the Dragonmark Chamber, Rayquaza will appear from the air, soaring across the screen from different angles, harming anyone who touches it. Its flight pattern is told by bursts of lighting, giving some time to dodge it. It also appears as a collectible trophy once more.

In Pokémon Mystery Dungeon Red Rescue Team & Blue Rescue Team, Rayquaza is portrayed as the final boss. The final boss takes place at the top of the Sky Tower. He attacks the player and their partner because they disturbed his sleep. After they defeat Rayquaza the partner convinced him that he is the only one capable of destroying a destructive meteor that could destroy the world. He then unleashed a super-powerful Hyper Beam and destroyed the meteor. After clearing the game, the player can revisit the Sky Tower to fight Rayquaza again and on rare occasions, he will ask to join the team. After being recruited to the team, the player unlocks the Stratos Lookout friend zone and can choose to play as Rayquaza.

In the sequels Explorers of Time, Darkness, and Sky, Rayquaza is the boss of the secret dungeon Sky Stairway, guarding a very rare item called Sky Melodica, which gives the player the ability to befriend flying-type Pokémon a bit more easily. Just like the other Mystery Dungeon games, Rayquaza may ask the player if he can join the team and play as him. 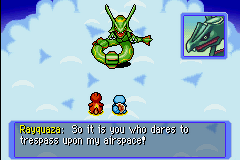 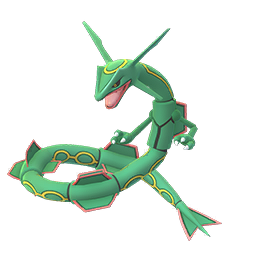 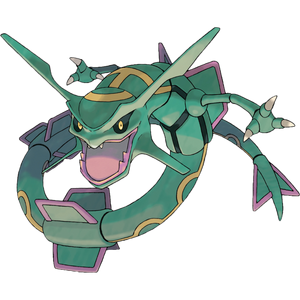 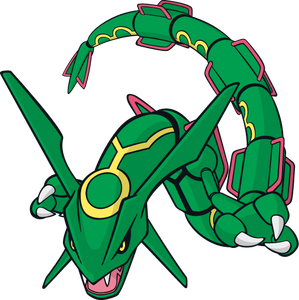 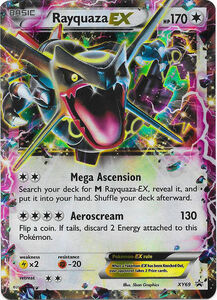 A Pokémon card of Rayquaza. 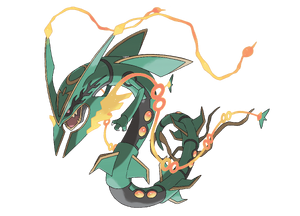 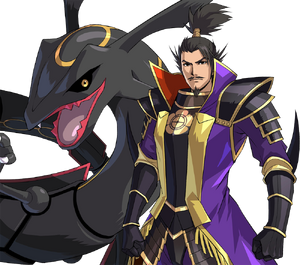 Nobunaga and his Rayquaza. 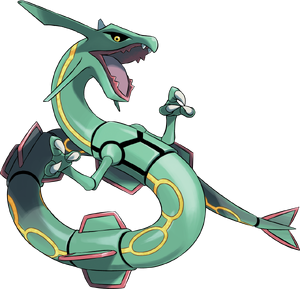 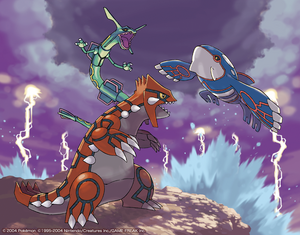 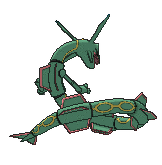 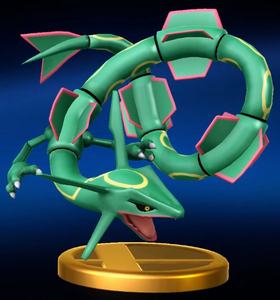 Rayquaza's trophy in Super Smash Bros. for Wii U.