To annihilate the vampires of Nosgoth and bring glory to the Sarafan.

Raziel is one of the antagonists and final boss from Legacy of Kain: Soul Reaver 2. In life he was a member of the Sarafan, a religious order of vampire hunters in the land of Nosgoth. He was in charge of the raid on Janos Audron's aerie refuge and had personalty plucked the ancient vampire's heart, thus ending the genecide of the anicent vampire race. In death Raziel would later be ressurected by Kain as his undead lieutenant and firstborn vampire son, thus fulfilling a time paradox through which Raziel ends up murdering himself since his killer ended up being a time travelling undead version of himself.

He was voiced by Michael Bell, who also played Quackerjack in Disney's Darkwing Duck, Lex Luthor in the Super Friends animated shows, Ezekiel Rage in The Real Adventures of Johnny Quest. Bell also voiced Melchiah, one of the Sarafan and later Kain's last born vampire son.

Raziel lived during Nosgoth's early history, wherein he operated as one of the Sarafan Inquisitors and acting as second-in-command after Malek, the Guardian of the Pillar of Conflict. As one of the Sarafan, Raziel ruthlessly hunted down the human vampires of Nosgoth to near-extinction. The Sarafan worked for Moebius, the elderly Guardian of the Pillar of Time, and co-founder of their order, who made the Inquisitos's main goal to track down and kill Janos Audron, the last of the ancient vampires, and subsequently retrieve the ancient's heart as well as the Reaver blade which Janos was saving for the arrival of the prophesized vampire saviour. But Janos had secluded himself high up in a mountain retreat that was inaccessible to anyone, thus preventing the Sarafan from enacting their onslaught against him for many years.

However, Moebius hinted to Inquisitors that a creature would seek Janos and open the way to him, thus giving the Sarafan the winning opportunity to strike at the ancient. This "creature" was none other than the wraith Raziel, who came from the future seeking for answers as to his the vampires's role as the true Guardians of the Pillars of Nosgoth. The wraith opens the way to the retreat and meets with Janos, unaware that he had been followed all along. In order to save Raziel from the hunter's attack Janos teleports him to another room, just as the Sarafan Inquisitors had broken into the main hall. When the wraith Raziel finally manages to unseal the door, he watches as the Sarafan Raziel cuts Janos's chest and takes his heart. The inquisitors retreat back to the Sarafan Stronghold with Janos's heart and with the Reaver, and as such  the wraith Raziel chases after them in order to avenge Janos and later revive him, being stopped on the way by countless demons. As he finally arrives at the Inquisitors's citadel, he is tricked by Moebius and forced to grab the Reaver blade. He is then challenged by the Sarafan Inquisitors and defeats them all, finally facing his human self. The two argue, and wraith Raziel gets extremely angry by the Sarafan Raziel's taunts, slaying him with the Reaver. Wraith Raziel renounces his past life self and is almost devoured by the Reaver, which at that point in time had been imbued with the power to devour souls.

With all of the inquisitors dead, save for Malek, the wraith Raziel fulfills a time paradox through which he ensured his own death and provided Kain with the corpses which Kain would ressurect as his undead lieutenants some seven hundred years in the future. Following the inquisitors's deaths, Raziel and his Sarafan inquisitor brothers would be martyred as heroes of Nosgoth's earlier history. The room in which Raziel died was reappropriated as a memorial to the slay inquisitors. While Melchiah, Zephon, Rahab, Dumah and Turel were commemorated in murals, Raziel's was remembered with a statue, much the same way Malek was honored.

Much in the same manner as the rest of the inquisitors of his order Raziel was unflinching and wholly devoted to the Sarafan cause. He displayed a complete lack of fear in the face of his enemies and a refusal to back away from a fight, as was the case when he went after Janos. He was likewise unrelenting in his convictions, such as when his wraith self came to reclaim Janos's heart, and Raziel would not give it back willingly.

He had also displayed a sadistic side to his personality and beliefs. Because Janos had eluded the Sarafan for a prolonged period the inquisitor came to the conclusion that ending the vampire with a quick death would have been undesirable. He preferred to take his time killing Janos and seemingly took pleasure in his suffering, whereas his fellow Sarafan commanders only found Janos threatening and wanted the end faster.

According to Moebius he and Raziel were friends while opperating the Sarafan Order together. This supposed relationship was never actually explored as Moebius merely mentioned it in passing to the wraith Raziel when the two of them first met. But given Moebius's nature as a trickster and deceiver, even if he had been on friendly terms with Raziel while the later was human, it is probable that this "friendship" had simply been used as motivation for the wraith Raziel to go after and kill Kain.

Sarafan Martial Training: As an inquisitor in service to the order, Raziel was trained in the ways of combat and battle strategy. He seemed to specialise in swordfighting and proved to be a challenge against the wraith Raziel while he was using the Reaver during their fight. As the second in command Raziel was a brilliant leader and an accomplished tactician, albeit Moebius's prophecies were liekely a great source of his victories, as shown when the Sarafan had finally managed their break-in at Janos's hideout. 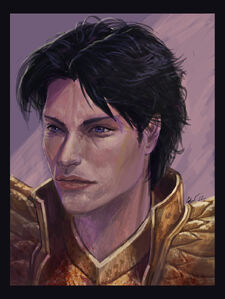 Portrait of the Sarafan Raziel by Daniel Cabuco.
Add a photo to this gallery

Retrieved from "https://villains.fandom.com/wiki/Raziel?oldid=3971594"
Community content is available under CC-BY-SA unless otherwise noted.