Help Skip in his goal to invade Earth.

Defeat and kill the Pearsons (both failed).

Razor and Tazer are the secondary antagonists of the 2009 science fiction family movie Aliens in the Attic. They are two Zirkonian agents who serve as Skip's minions, but are most likely in a relationship with each other. Tazer is the strongest member who serves as the weapon specialist, while Razor is the most violent member and notably the only female of the team.

Razor was voiced by Kari Wahlgren (who also played Charmcaster in the Ben 10 franchise, Enchantress in The Avengers: Earth's Mightiest Heroes and Mileena in Mortal Kombat 11) and Tazer was voiced by Thomas Haden Church (who also played Dwayne LaFontant in Over the Hedge, Lyle Van de Groot in George of the Jungle, Brooks in Charlotte's Web, Tal Hajus in John Carter, Sandman in Spider-Man 3 and Killer Moth in Teen Titans).

When four aliens consisting of Skip, Sparks, Tazer and Razor arrive on Earth, they land on the roof of the Pearson family's house, crashing their satellite dish. Tom and Ricky are sent to investigate with Jake following them. They arrive in the attic and Ricky sends Tom out of the window with Jake already outside. They notice the dish beyond repairs and notice Sparks. Sparks greets them, but Skip tries to introduce themselves. However, he decides not to and orders the pair to attack the kids. Tazer aims at the kids, but Bethany's boyfriend Ricky gets in the way and is shot instead. Skip brainwashes Ricky and uses him as his pawn to attack them until Ricky falls off. Tom and Jake's siblings come over and they manage to unlock the window and get them inside. Tom orders the kids to get downstairs while the aliens shoot mind control buds at Tom and Jake as they fall down the ladder. Art and Lee manage to close the door before the aliens can escape and the buds fall off of Tom and Jake's neck. The aliens try to open the door, but the kids manage to hold them back.

In the attic, Skip berates his minions for letting the kids get away which results in the pair arguing with each other. The kids try to call the police, but Razor cuts the lines with her nail-like claws. Tazer patronizes Razor and she retaliates by hitting him in the stomach. While Sparks is having trouble fixing the locator map, the pair watch The Princess Bride and challenge each other over which gender is better. Skip comes over and orders them to help him invade Earth, rather than watch television. Tazer catches a rat, but Skip stops him before Tazer could eat it and swallows it whole, much to Razor's disgust as Skip belches loudly. Meanwhile, Tom and Jake climb up to the attic window and eavesdrop on the aliens' plan to head to the basement. The two kids fall off, but not before Skip catches sight of them. The kids head into the basement and Tom realizes that something is setting Art's DS to glitch, so they come up with a plan to defend the basement with their ultimate weapon.

Jake and the twins head upstairs and Jake shoots at the attic with his punisher paintball gun as the attic door opens. An anti-gravity grenade falls out of the attic and it sets off, causing the kids to levitate. Tom and Hannah come into the room while Razor and Tazer jump from the attic with their gravity boots as they head for the door. However, Tom stops them with a fire extinguisher and locks the door. Tazer reaches for the lock, but Jake and Tom manage to break the grenade and they fall to the ground. The two aliens manage to escape and close the attic, but not before Jake shoots a paintball at Tazer.

The aliens roam through the vents to reach the basement, but Tom raises the heat and the aliens retreat. The kids use a toy car with a camera to catch sight of the aliens, but Skip ambushes it and tears it up before throwing it out of the vents. Lee cuts the power and Jake throws firecrackers in the vents, which forces the aliens to retreat. Tom orders Hannah to hide in her room and Sparks falls out of the vents into the room, where they befriend each other. The aliens realize that Sparks is missing and head back, where they find Sparks with the kids. Sparks tells the kids that the base the aliens are after is actually underneath the basement. Tazer comes into the bathroom through the toilet and brainwashes Nana to attack the kids, while saying "Buenos noches, wrinkles!". A mind-controlled Nana breaks down the door and the aliens manage to catch the suitcase as they leave, but it is revealed that Hannah had hidden Sparks under the pillows before they could catch him.

Sheriff Armstrong arrives at the house and confronts the kids for making a fraudulent call. Skip contacts his minions and asks if they have Sparks, to which they reply that they don't. Sheriff Armstrong tries to look into the box with Skip inside until the parents arrive. Tazer tries to shoot a control bud onto the sheriff from the roof, but is intercepted by Jake and chased. Tazer leads Jake back to the attic, where he and Razor incapacitate Jake by using his own paintball gun to shoot paint balls at him before capturing Jake and tying him up. The two then drag Jake down the stairs into the basement while Skip manages to capture Sparks by using Ricky and battles Nana until she manages to defeat him. Bethany comes in and catches sight of Skip as he runs to the basement. The parents send the kids up to their rooms for punishment, but Bethany convinces Tom to continue with his plan and they head to the basement. As the aliens start up the machine, Skip orders Sparks to rebuild it, but he refuses and Skip throws him in.

The kids arrive at the basement and manage to rescue Jake. The aliens start up the machine and Sparks convinces them to stop as humans turn out to be friendly. The kids save Sparks by throwing Coke bombs at the aliens and Tazer is knocked unconscious in the process. Razor tries to kill Sparks for being a traitor until Bethany stops her and locks her in a recycling bin. Tom shoots a potato at Skip which knocks him onto the machine and the kids celebrate their apparent victory, but Sparks tells them that Skip has grown into a giant as he emerges from the trees. Tom and Jake follow Skip as he summons the invasion while Razor breaks out of the recycling bin and fights Bethany, only to be eventually defeated by her. Meanwhile, Tazer regains consciousness and grows into a giant as well, but Tom brainwashes Skip while the twins use him to engage Tazer in a fight. At first, Tazer gains the upper hand, but Tom manages to defeat him and they shrink back to their normal size. Razor picks up Tazer and they retreat, while the machine shrinks down with Skip. Alien reinforcements arrive, but Sparks calls off the invasion and heads back home.

It is unknown what happened to Tazer and Razor afterwards, but it is most likely that they headed back to their home planet to engage in a relationship.

Razor and Tazer are very loyal to Skip as they are very ruthless and cunning fighters. They are extremely agile and can easily dodge whatever attack the kids have. They often get into a feud over which gender is better, but despite this, they still care for each other. 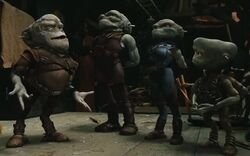