NOTE: This article is about the incarnation of Reactron from the Arrowverse. The mainstream version can be found here: Reactron.

Ben Krull, nicknamed Reactron, is an antagonist in the first season of Supergirl. He is a former reactor engineer who wants to kill Kara to harm her cousin Superman.

He is portrayed by Chris Browning.

Ben Krull was a worker at Bakerline Nuclear Power Station in Metropolis. A terrorist attacked the plant, intending to create a nuclear meltdown but was stopped by Superman. Two reactor engineers however were seemingly killed when the facility was flooded with radiation, Ben and his wife Alyssa. Ben survived the radiation but was heavily scarred by it. He also blamed Superman for the death of his wife.

A few years before the events of the series he attacked Metropolis, gaining the nickname Reactron from the Daily Planet. He had many fights with Superman in which neither of the two could gain the upper hand.

Reactron is first seen in his hideout at a scrapyard in the countryside outside National City. While donning his armor he watches TV. After finding out that Supergirl and Superman are cousins, he fuels energy from the power core inside his chest into his hand and blasts an energy beam into the television. He later attacks Kara after she has saved a truck driver out of the wreckage of her truck. After the woman is safe, he shoots a beam at Kara before revealing himself. Kara asks him who he is and Reactron states that he is just a ghost who wants Superman to suffer and thus attacks Kara, Superman's cousin. He blasts another energy beam into Kara and starts fighting her. Although at first evenly matched, Kara is forced to take shelter because of Reactron's energy blasts. She rips the door out of a nearby car and uses it as a shield, eventually lunging it into Reactron. This damages the energy core of Reactron's armor and after realizing that he is no longer able to shoot energy beams he lifts off and escapes.

Back at the DEO, Kara is told that the DEO can't engage Reactron because he is not an alien but merely a human who uses advanced technology. Reactron later enters Lord Technologies in search for someone with knowledge about nuclear technology. He kidnaps Maxwell Lord, who volunteered to help Rectron after his workers were threatened by Reactron. He returns to his base with Lord. While analyzing Reactron's armor, Lord also comments on Reactron's condition.

With help from the DEO Kara finds the location of Reactron's scrapyard but wants to talk instead of fighting. When she gets not reply from Reactron she enters a nearby shack where she finds Lord tied up. While trying to free him Kara is attacked by Reactron whose suit is working again. Kara tries to reason with Reactron, claiming that his wife wouldn't want him to hurt anyone. Reactron replies that Ben Krull is dead because Superman saw to it. He blasts a powerful beam into Kara, knocking her to the ground. He then tortures her with lightning from his suit while claiming that after her death her city will perish to. He is then suprisingly attacked by Superman who had been contacted by James Olsen. While Reactron and Superman fight, Kara passes out. She later finds out that Reactron managed to escape.

After none of the terrified guests are able to answer him, he approaches Maxwell Lord but is knocked into a wall by Supergirl before he can harm Lord. Kara claims that Reacton will go to jail. Reactron answers that some day he most likely will but that Kara won't be alive to see it. He shoots an energy blast into Kara, who deflects it with her cape. The blast hits a pillar which falls over and almost crushes a party goer. Kara leaps to the scene to catch the pillar in time but is now vulnerable to attacks. To save Kara, Olsen reveals himself to Krull as a close friend to Superman. He runs off, pursued by Reactron who decided that killing Olsen would hurt Superman. Before she can pursue Reactron, Kara is contacted by the DEO who tell her that taking the core from Reactron's armor would deactivate his weapon systems, however she must engulf it in lead first to prevent it from exploding. Kara pursues Reactron and crashes into him, both landing on a street away from the party.

There, she manages to rip out Krull's core with the hand she previously dipped into molten lead. Without the core's power, the suit gets to heavy for Reactron to carry and he falls to the ground, pinned inside his own armor. Kara is later contacted by Superman who congratulates her for taking down Reactron, something he was not able to do himself. 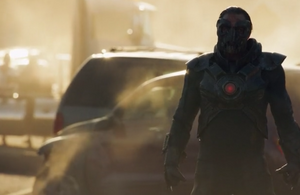 Reactron about to fight Kara 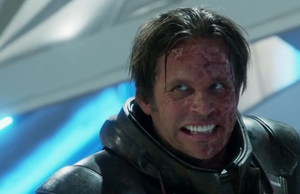 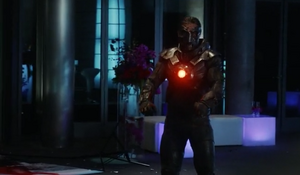