Reala is the secondary antagonist of the NiGHTS franchise. He is a Nightmaren created by Wizeman the Wicked, serving as the second-in-command to his master, and is NiGHTS' arch rival.

He is voiced by Atsushi Kisaichi in the Japanese version, and by Casey Robertson in the English version.

In addition to NiGHTS, Reala was a first-rank Nightmaren created to do Wizeman's bidding. Reala has a brutal and cruel nature, and is very loyal to his master and greatly fears his wrath.

Defaulted as the boss for Elliot Edwards's Stick Canyon dream, Reala was gifted with one of the very few spoken lines in the game. After a zoom-in of him on his throne, he stands, pointing at NiGHTS while declaring "Bedishino NiGHTS!" which is a slang term for "Let's go NiGHTS!".

The player must paraloop him three times in order to defeat him, after which you don't see him again. Defeating Reala unlocks a two-player option in the Sega Saturn version of NiGHTS into Dreams, but it was taken out in the remake for the PlayStation 2.

In NiGHTS: Journey of Dreams, Reala wears a Persona mask given by Wizeman to represent his loyalty to his master. He was given a British accent in Journey of Dreams to fit the style of the game. Reala also has a more frequent role in Will's dream than in Helen's dream, but he appears in her story almost immediately and plays a larger part in the reveal of NiGHTS' identity to Helen.

Reala was finally defeated by NiGHTS after he appeared in Bellbridge and tried to hurt both Will and Helen.

Reala appears as an unlockable playable character in both Sega Superstars Tennis and Sonic & Sega All Stars Racing Transformed.

Reala's signature colors are red and black. In the original Saturn game, Reala had a purple ruffled collar, yellow fingers (possibly gloves) and a vest that appears to be open with a diamond pattern on his chest.

He was redesigned for Journey of Dreams; now sporting a mask called a Persona, which is a symbol of loyalty to Wizeman. It is gold with a pink jewel in the center with black feathers on the edges. His vest is closed over his chest and has a flame/swirl pattern, he wears arm guards and hip-plates with a similar design and fingerless gloves (the yellow is now the same color as his skin).

Reala's powers are identical to those of NiGHTS; he can fly and create a vortex by flying in a circle. He is also a very skilled martial artist, much like NiGHTS is, and can perform various aerial acrobatics. 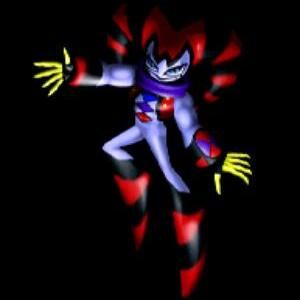