Stop Butters from letting people feel good about themselves.

Shame the safe spacers (both succeeded).

Mr. Reality is the main antagonist of the season 19 episode "Safe Space" in the TV show South Park. Since he was killed at the end of the episode, it's is his only appearance so far.

He was voiced by Alex Ruiz.

Reality first shows up during the musical number where Eric Cartman, Randy Marsh, PC Principal and various other celebrities sing about how they feel much safer in their safe spaces, while Butters has to constantly filter out the negative comments on their internet accounts.

Reality attempts to break into their safe spaces, but is then vanished into thin air when Cartman powers up his gang during the musical number. He then appears again in the real world, where he attempts to kill Butters for letting people feel good about themselves. After Butters jumps out the school window due to the negativity of Reality himself and the negative comments overwhelming him in the end, Reality crashes the "ShamelessAmerica" party, insults everyone at the party, and then gives his speech that reminds everyone that Butters is in the Hospital with serious injuries, and could possibly die as a result of their selfishness and over-reliance on him. After Butters is discharged from the hospital, he reluctantly hangs Reality in front of the Townspeople, as they cheer from his execution.

Reality is a personification of reality itself, appearing as a stereotypical cartoon villain, and is often a villain in the eyes of some people who are not able or willing to confront the reality around them by being obsessed with their own safe space or comfort zones instead. 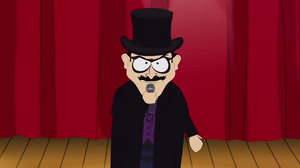 Reality giving a speech at the ShamelessAmerica party. 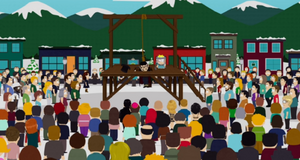 The town of South Park hangs Reality for insulting them.