Reaper, originally known as Gabriel Reyes, is a playable character in the 2016 video game Overwatch and its sequel Overwatch 2 as one of the main antagonists of the game's lore. He is a mercenary who was originally a founding member of Overwatch before he defected from them and became one of the leaders of Talon's council. He is also the main antagonist of the animated short "Recall" and one of the main protagonists of the animated short "Infiltration".

He is voiced by Keith Ferguson, who also played Lord Hater and Marluxia.

Some speak of a black-robed terrorist known only as the Reaper. His identity and motives are a mystery. What is known is that where he appears, death follows.

The Reaper is an extremely volatile mercenary, a ruthless and remorseless killer responsible for terrorist attacks across the world. He has fought in many armed conflicts in the last decades, showing no loyalty to any cause or organization, except Talon.

Survivors have described a black shadow ghosting unscathed through the most hellish battlefields. The few bodies recovered of those he kills are pale, empty husks drained of life, their cells showing signs of intense degradation. It is possible that he is a byproduct of failed genetic alteration which forces his cells to simultaneously decay and regenerate at a hyper-accelerated rate.

Those attempting to track his movements have begun to see a pattern in his appearances. They believe that Reaper is hunting former Overwatch agents and systematically eliminating them.

Reaper admits to being "a high-functioning psychopath", having a passion for murder and vengeance and is willing to kill even without a solid motivation. He is often conceited, sadistic and petty, as shown in the Cinematic Trailer where he goes out of his way to step on Winston's glasses before attempting to kill him.

Reaper also expresses dislike for the Omnics, according to his insults whenever he defeats Bastion or Zenyatta. He additionally has a tendency to get annoyed, an example of this being his reaction to Mercy resurrecting enemy teammates.

In spite of how cold-hearted he is, Reaper doesn't seem to mind cracking jokes related to death and The Grim Reaper, showing that even he has the time to display his own sense of humor.

He also has a indomitable will. Despite the agony of being disintegrated by Winston's tesla cannon, he is able to hold on to his sanity proving how pain tolerant Reaper is.

Gabriel Reyes was a senior officer in the US military. Born in Los Angeles, Reyes was enlisted into the US's Soldier Enhancement Program, and through it became close friends with Jack Morrison, who would later became known as the vigilante Soldier: 76. When the Omnic Crisis began and the UN began to assemble Overwatch, the two accepted the offer to join alongside Reinhardt Wilhelm, Torbjörn Lindholm, and Ana Amari. Though Reyes led the strike team, Morrison was recognized as the team's moral fabric.

When Overwatch successfully put down the crisis, Morrison was promoted to Strike Commander while Reyes became head of Blackwatch. He oversaw Overwatch's covert ops missions and trained agents like McCree. Over time, Reyes began to resent Morrison for receiving the public's attention while he received none. He began to organize a rebellion within Overwatch that ultimately led to a conflict at the Swiss Headquarters, resulting in an explosion that supposedly killed both Reyes and Morrison. Overwatch was disbanded shortly after.

Reyes narrowly survived. At some point, Blackwatch member Moira experimented on him, altering his cells to decay and regenerate at an increased rate. He joined Talon's forces and developed a new identity as Reaper, a masked terrorist that hunts down and assassinates former Overwatch agents.

In Recall, Reaper attempted to invade Watchpoint: Gibraltar, assassinate Winston, and hack into his database to find other agents' locations. Though he brought a squadron of Talon agents as backup, the operation was not successful.

In the Cinematic Trailer, Reaper works with Widowmaker to steal Doomfist's gauntlet from a museum. After a fight with Winston and Tracer, this, too, was unsuccessful; though both escaped intact, the gauntlet was badly damaged and the two lost their upper hand.

Being an undead wraith, Reaper wields unimaginable power. His immortality makes him impossible to kill, and even beyond that, Reaper is able to come back from powerful blows and even being disintegrated. His hellfire shotguns are immensely powerful, capable of taking down primal Winston in a few shots. He is also capable of being able of turning into an ethereal wraith that makes him immune to damage, Even without his immense powers, he has superhuman strength, durability, reflexes, and agility. Overall Reaper's powers were Godlike and made him a formidable foe.

Reaper's twin shotguns are used to tear apart opponents in a wide spread and is meant to be utilized at close range to quickly dispatch most opponents however shots are ineffective from a moderately far distance.

Reaper becomes a shadow and while in this form, he takes no damage and is able to pass through enemies and gains increased speed but cannot fire his weapons or use his abilities. It also sheds any debuffs on Reaper and is still able to receive buffs and healing.

After marking a destination, Reaper disappears and reappears at that location. He is also very vulnerable during this move as he cannot shoot, crouch, jump, walk or reload during the animation.

Enemies killed by Reaper drops a Soul Globe that only Reaper can see and consume to replenish some of his health.

In a blur of motion, Reaper empties both of his Hellfire Shotguns at breakneck speed, unleashing devastating damage to all nearby enemies from every direction.

Reaper is the lone wolf, built for pushing ahead on his own when possible and wandering through enemy territory, striking fear into their hearts and hitting them when they least expect it. He can bring down even the toughest heroes and can earn back the health he lost in combat from fallen opponents.

Gabriel Reyes when he was in Blackwatch 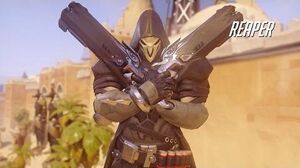 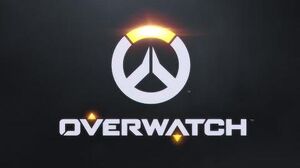 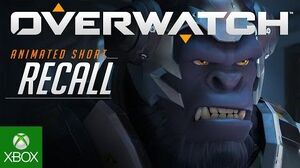 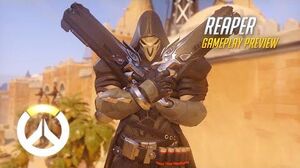 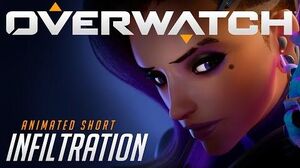