Wipe out all regular vampires.

The Reapers are vampiric abominations and an antagonistic species Blade II. They are a new breed of vampires that are much stronger and more deadly than regular vampires. Originally, these beasts are created from extensive research of vampire DNA that spawns the namesake virus known as the "Reaper Strain" in hopes of making the new vampires called Daywalkers that lacks their natural weaknesses (namely garlic, silver, and sunlight) like the protagonist Blade by the Damaskinos family.

Unfortunately, instead of creating vampires that share similar attributes with the heroes, they ended up created as monstrous abominations that can turn other vampires into reapers as well as would eradicate both vampires and mankind had they not destroyed.

Unlike regular vampires that almost identical with humans in terms of appearance, Reapers' appearance is feral and far more like a ghoul in mythologies than other vampires in the series: their claws and fangs are noticeably longer, have grayish complexion and little to no hair. They have a thin scar starting from the lower lip that ends at the base of the neck, in which opened up whenever they opened their three-way jaw apart for feeding.

While feeding, their tongue (which normally same with humans' or regular vampires') shifts into proboscis-like organ form that presumably connected to the esophagus for feeding and easily reverts back while not used. The transformed tongue also splits into six ways at its points, revealing barb-like smaller teeth and two sharper, spike-like inner tongue inside. The tongue also possesses overdeveloped, bifurcated masseter muscles for a stronger bite.

The split lower jaw also reveals retractable, longer fangs that can inject neurotoxin in the similar manner of viper snakes' fang. Therefore, their heart also encased in bone armor except for the sides.

On their back, their shoulder blade was mutated into some kind of gill-like system.

Though their physical attributes are surpassed regular vampires that encountered by Blade, their intelligence (with the exception of their leader/alpha Nomak) degenerate to the point that they became feral and lost the ability to speak. In spite of this, they still intelligent enough to ambush their preys as seen in battle within the city sewers. They also able to scales on the wall like spiders, making them more dangerous.

Their durability also enhanced along with their regenerative healing factor. An example of a Reaper's durability and regeneration is their ability to be shot, wounded, and beaten and still fight as if they were at full power. Even breaking their neck only staggers the reapers for a brief of time. Their strength also enhanced as well albeit varies in each individual of reapers. Reaper's lifespan is complicated as they can live from few hours to an eternity depending on how frequently they feed.

When their jaw splits and their tongue shifts into probosci's form, barbs within their tongue injects the reaper virus into the bloodstream of those whom they feed. The split lower jaw's retractable hollow fangs inside are able to inject neurotoxin to immobilize the victim during the feeding process. Also, during the feeding process, Reaper's shoulder blade that mutated into gill-like organ would open, presumably to excrete a trigger pheromone that causing other reapers to swarm to the scent of prey.

In addition, Reaper possesses immunity to garlic, EDTA, and silver as well as a heart that encased within armor layer of bones (which not covers the sides). The only known reaper that killed by a stake through the heart was Nomak.

In spite of their resilience, reapers have an extreme weakness to the sunlight and ultraviolet ray which burns them worse and quicker than a normal vampire (as they combust into blue ashes instead orange ashes in regular vampires). Therefore, reapers must feed every few hours or their body's metabolism will start feeding on their own bodies, slowly killing them.

However, it's also implied that not all of their body parts that immune to silver, as when Nomak kills himself with Blade's shattered sword, his heart combusts into blue flames. This was shown where his mouth emits blue light before blue flames consume the rest of his body from the inside. 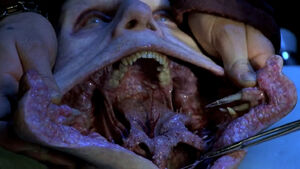 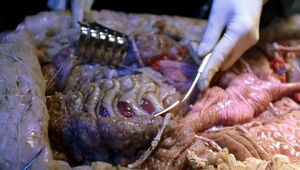 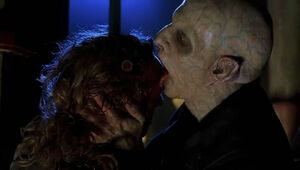