Villains Wiki
Register
Don't have an account?
Sign In
Advertisement
in: Immortals, Evil from the Past, Aliens,
and 35 more
English

Eradicate all advanced sapient and sentient life in the galaxy and transform them into Reapers to ensure the existence of life by preventing the synthetic creations of the organics from destroying all life (succeeded until their defeat or formerly).
Help the species rebuild after realizing what their actions were causing (synthesis ending).
Serve the Shepard AI (Control ending).

The Reapers, also known as the Old Machines by the Geth, are an ancient race of gigantic living spaceships and the main antagonists of the Mass Effect trilogy.

Initially thought to be a myth by most of the characters, the Reapers hibernate in "Dark Space" for thousands of years and then return to the galaxy every few millennia to destroy all the Milky Way's most advanced civilizations, most notably the "Protheans", who gave them the name "Reaper" once they stopped believing in devils.

The Reapers are created by the Catalyst (the overarching antagonist of the original trilogy) who modelled them after the Leviathans. The first one was known as Harbinger. One Reaper was created after one cycle.

The Reapers can gradually brainwash anyone who comes into prolonged contact with them, a process known as "indoctrination", and also to directly take complete control of an organism's body. It is also revealed that they were the ones who originally built the Citadel, the main base of galactic civilization, intended as a "trap" of sorts to attract a large number of advanced life forms together in one place.

Before Mass Effect 3, exactly four Reapers are encountered in the series:

Hundreds of currently unidentified Reapers are seen along with Harbinger in the ending sequence of Mass Effect 2 flying towards the inhabited Milky Way, who finally reach it in Mass Effect 3. In this final game, no full-sized Reapers are fought directly, though many do appear as background hazards and chase the Normandy during the space travel sequences. A few "mini–Reapers" known as Destroyers are fought, however. 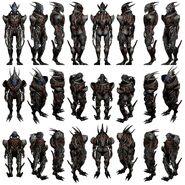 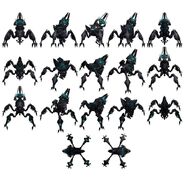