Leader of his group

Rebelling against his superiors.

Reaver is a minor antagonist in the 2003 videogame Spawn: Armageddon. He is the leader of a band of ferocious male Angels and somewhat of a friend to Mammon. He is the main antagonist of the 12th mission Falling Angels.

He was voiced by John Grant Albrecht.

Reaver leads a small group of rogue Angels in rebellion against their superiors, who have no wish to protect life on Earth, and are obsessed with destroying Hell at any cost.

After a mysterious green flash of light hits through the city of New York, Demons and Angels began their war on the streets, leading Spawn to search for answers about the mysterious green light.

Mammon sends Spawn to the city only to fight a new type of Angels, who wanted Spawn dead. After defeating Reaver and his men, Mammon stops the fight and asks Reaver how he knew Mammon wanted him to help. However, Reaver claims that he tracked and wanted to kill Hellspawn. Spawn then leaves and heads toward Central Park after sensing the power of Hell emanating from the location, leaving Mammon and the Reaver to their plans. Reaver is not seen or mentioned for the rest of the game. 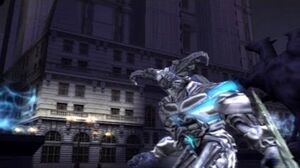