Perform the bidding of the Hellfire Club
Annihilation of X-Men

The Reavers are a group hellbent on the destruction of the X-Men and created by the Hellfire Club as its private military. Mastermind, a mutant villain, attempted to mentally control Jean Grey in a bid to join the Hellfire Club's Inner Circle, marking the first major attempt of the group. In the resulting confrontation with the X-Men, Wolverine fell victim to Leland's mass-increasing powers, ended up in the New York sewer system and was believed dead. However, Wolverine, very much alive, reentered the club through a secret sub-basement entrance, attacked a group of mercenaries sent to track him down - Wade Cole, Angelo Macon, and Murray Reese - and critically injured them with his claws. These men were eventually recovered and then converted to cyborgs, continuing to serve the Hellfire Club as a special task squad.

Their first assignment following their reconstruction was to take down the X-Men after Hellfire leader Emma Frost had switched consciousnesses with Storm, and later they assisted Donald Pierce in trying to kill the fledgling New Mutants. However, in both cases they were defeated and eventually went underground for some time.

The first incarnation of the Reavers was a group of cyborgs operating from the Australian outback led by Donald Pierce. They were seemingly destroyed by the Sentinels on the order of the Upstart from the future Fitzroy.

Lady Deathstrike made an oath to the Reverend William Stryker, creator of the Purifiers. She promised to him that in the mutant's darkest hours she would help his Purifiers. She recreated the Reavers. They caught up with Cable, just in time for the X-Force to attack. Lady Deathstrike took on X-23 and was seemingly killed. The other Reavers died, but not without killing Caliban first. After being recomposed by Donald Pierce and gathered by Deathstrike, they assaulted Utopia, before being defeated by X-Force.

The Reavers appear in X-Men: The Animated Series alongside Lady Deathstrike when she goes down to the Morlock's tunnel and tricks Wolverine into coming down there, hoping to get him to open an alien ship that she found in the tunnel. When the ship is opened, an alien comes out of the ship and sucks the life out of the Reavers. So Lady Deathstrike has to work together with Wolverine to defeat the alien. In the end, the X-Men defeated the alien and all the Reavers' life energy is sent back to their bodies.

The Reavers appeared in Wolverine and the X-Men, with their vocal effects provided by Charlie Adler in "X-Calibre" and by Steve Blum in "Hunting Grounds." They are shown as servants of Spiral. The identified Reavers are Reese, Cole, Macon, and a female named Ricochet (who was exclusive to the TV series).

The Reavers are portrayed in the 2017 X-Men solo movie Logan as the mercenaries of Dr. Zander Rice as one of their commanders was Donald Pierce. Here, in 2029, the Reavers are portrayed as highly skilled cyborg bounty hunters and mercenaries after subject X-23 and use harsh tactics against non-primary targets to further their goals. Though they are compiled of a variety of backgrounds, they are equipped akin to paramilitary, drive outfitted trucks, and are well trained as a unit. None appear to have special abilities like that of a mutant, but a few seem to have cybernetic enhancements from either severed or formally deficient limbs. This of course is an allusion to the fact that the Reavers are cyborgs, though this isn't outright said in their appearance here.

Beyond hunting, they also work to secure the medical facility where Dr. Rice's secret pet projects are conducted. They also work to secure a local school in western America that has been converted to a make shift medical facility by Rice. Though they probably do not have to follow legal jurisdictions, they are encouraged to operate in the U.S. and Mexico, but specifically not Canada. 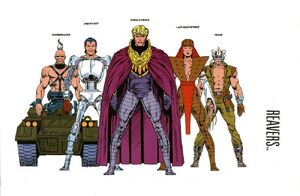 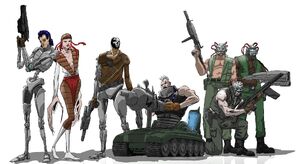 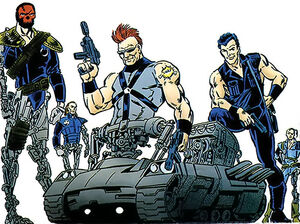