Protect and keep Sara to herself (formerly)

Rebecca Evans is the main antagonist of the 2011 thriller film The Roommate.

She was portrayed by Leighton Meester, who also played Blair Waldorf in the Gossip Girl TV series, Heather Crowley in CSI: Miami and Jamie Martin in That's My Boy.

She ends up being the roommate of Sara Matthews. The two quickly become close friends. However, Rebecca starts to become more obsessed with Sara. This starts with her threatening to kill Tracy (close friend of Sara) unless she stays away from Sara. Tracey moved to another dorm in fear of Rebecca.

Later, another close friend of Sara named Irene invited Sarah to move in with her. To ensure that Sara wouldn't accept the offer, Rebecca kills her pet cat, Cuddles, by putting it in a dryer. She then told Sara the cat ran away. To avoid being found out, Rebecca inflicted herself with injuries. She then told Sara that she looked for the cat but was assaulted by a thug. This caused Sara to feel bad and she decided to spend Thanksgiving with Rebecca.

Later, Rebecca hears from Sara that her designs professor, Roberts had kissed her, Rebecca decides to get rid of the professor by seducing him while recording their dialogue on a tape recorder to make it sound like he was trying to rape her.

Sara overheard a conversation between Rebecca and her father, learning Rebecca had trouble making friends. Rebecca's mother mentions that she is supposed to be taking medication. She also meets a former friend of Rebecca who resembles her (Sara). Sara and her boyfriend Stephen then found Zyprexa pills which are used to treat mental illness. Because of this, Sara realized that Rebecca was crazy and she decided to move in with Irene.

Irene then went to a club where she saw Rebecca. The two of them kiss and head back to Irene's place. Sara then heads to Irene's house the next day but discovers her to be missing. Meanwhile, Rebecca impersonates Sara and kills her ex-boyfriend, Jason.

Sara then receives a text from Irene saying she needs her and discovers her being held hostage by Rebecca. Rebecca then reveals that she was responsible for Tracy, Professor Roberts, and the deaths of Sarah's cat and ex-boyfriend, so she could win Sara's friendship. Rebecca then decides to kill Irene to get her out of the way, but Sara's boyfriend Stephen shows up to stop Rebecca. Sara then attempts to kill Rebecca by using the gun but the cartridge is empty.

Rebecca, realizing that Sara was actually trying to kill her and that her evil schemes of winning Sara's friendship have been for nothing, completely loses it and attempts to kill Sara by choking her to death. However, Sara then grabs a box cutter and shows it to Rebecca, causing her to stop choking her as she realizes in horror what Sara is about to do to her. Sara officially denounces Rebecca as a selfish, crazy and evil woman by whispering, "You were never my friend", before ultimately using the box cutter to stab Rebecca in the back, finally killing her.

Rebecca was charming and sophisticated with unusually conservative tastes. She shoved a horror of moral decadence and favored traditional moral values. Deep down inside, she had a small sense of kindness in her, but this was quickly overshadowed by her violent and psychotic exterior. Rebecca was obviously very intelligent and sympathized with the equally intelligent Sara, admiring her creativity while trying to take on the role of a mentor figure to her. Rebecca disapproved of Sara's innocently hedonistic lifestyle which she blamed on Sara's friends from whom she tried to steer her away. In terms of clothing, Rebecca dressed elegantly but conservatively and also showed a preference for going barefoot indoors. 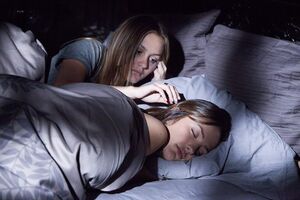