Training to imbue the ways of the Sith.

Bring back the ideals of Emperor Palpatine and ultimately the Galactic Empire itself.

The Reborn were a "new, large species" of warriors spawned and created by Desann at the Valley of the Jedi in Star Wars Jedi Knight. They were a deadly force of Dark Jedi and of the Empire Reborn faction. Each of the fighters were trained to use the Force as well as a Sith lightsaber, which made them far different from earlier imperial troopers.

Their appearance is misleading, as they all look to be Sith knights, but their overall strength is much weaker. Though each of them can duel a Jedi by lightsabers, they lack the many years of training that Jedi possess, the patience, and intelligence to be a match for the Jedi.

Desann and Tavion used the Reborn to create a boundary against Kyle Katarn, and to prepare to attack Luke Skywalker and his Jedi Academy. Katarn fought through, however, and when he came and faced Desann alone, at the Yavin Temple, Desann was defeated. Many Reborn were killed after Desann's death, but few still remained with Tavion.

Tavion, Desann's apprentice, fled along with surviving Reborn fighters. When she gained more power, she trained the Reborn tougher, and improved their skill, strength, and ability to intimidate opponents. After Jaden Korr defeated Tavion, he and other members of Skywalker's Jedi Academy wiped out the rest of them. 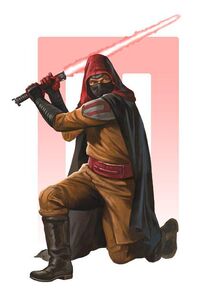 One of the Reborn wielding a Sith lightsaber.