To assist and serve Frieza.

Reacoom (also known as Recoome in the Funimation dub) is one of the Ginyu Special Force who work for Frieza, a major antagonist in the Namek Saga and a minor antagonist in the Captain Ginyu Saga. He is the biggest (and second tallest), with a humanoid appearance and red hair. He is often speculated to be the second strongest after Captain Ginyu. Despite his seemingly goofy attitude, Recoome is actually quite intelligent, not to mention extremely sadistic. He might also be the evilest out of all the members even though it isn't clear.

He was voiced by the late Kenji Utsumi in DBZ and Seiji Sasaki in DBZ Kai in Japanese and Christopher Sabat in Funimation dub and David Kaye in Ocean group dub in English.

When the Ginyu Special Force was called to Namek to take the Dragon Balls back from Vegeta, Recoome, Burter, Jeice, and Guldo did rock-paper-scissors to determine who gets to fight Vegeta. Reacoom won, but decided to let Gurd fight Krillin and Son Gohan first. During the fight, Recoome bet with Burter that Guldo was going to win in a few minutes, staking a chocolate nut bar. Time elapsed and Recoome gave Burter the chocolate bar.

After Vegeta killed Guldo, Recoome fought him. He initially appeared at a disadvantage, with Vegeta, when he lost his armor, and later a part of his hair, but Recoome beat Vegeta up so bad that Krillin and Gohan were forced to step in, saving Vegeta from Recoome's Eraser Gun.

Recoome nearly killed Krillin with one kick and fought Gohan, beating him up. That said, because Recoome was injured from the previous fights, Gohan does land a few good hits.

Not even Gohan's hidden powers were enough to defeat him. He bullied and beat Gohan in much the same way Nappa did, dominating the boy and sitting on him, and like Nappa, farted very loud several times on the child (which is made even worse as one of Vegeta's attacks left Recoome's clothes damaged, revealing his bare buttocks).

He used an attack known in the games as "Recoome Renegade Bomber" on Gohan. As Gohan moved in for a final attack, Recoome jumped over him and kicked him, breaking his neck.

Just when he had Vegeta, Gohan, and Kuririn at his mercy, Son Goku arrived on Namek, spinning Recoome around when he arrived at the battlefield. As Goku gave Kuririn and Gohan Senzu Beans, he threw one to Vegeta (as a reward for saving Kuririn and Gohan from Guldo). Recoome tried to catch it in his mouth, but missed.

As Goku turned to face Recoome, the Ginyu member taunts him, flipping him the bird and mocking his son's pathetic performance. Recoome was unable to land a blow on Goku and then powered up for his ultimate attack (revealed to be a sort of energy explosion in the Tenkaichi games) but, seeing this as an opening, Goku elbowed him in the stomach while the giant was distracted, knocking him out cold with one hit.

After Goku easily defeated Burter, causing Jeice to run away, Vegeta killed Burter and then killed Recoome with an energy wave.

It appeared to completely destroy his body, however his corpse was later seen by Gohan, fully intact, as he took Piccolo back toward the ship during Goku's fight with Frieza.

After his death, Recoome appeared alongside Burter, Jeice, and Guldo as Kaio invited them over to his planet in the next dimension to see if Yamcha, Tien, and Chiaotzu could defeat them. Recoome fought Yamcha, and was defeated with an energy wave, sending him flying through the clouds and into hell. This is to show how much stronger Yamcha and the others have gotten, as they were originally devastated with fear when they saw that they had to fight the Ginyu Force.

In the Great Saiyaman Saga, Recoome, along with Cell, Frieza, King Cold, Burter, Jeice, and Guldo, caused trouble in Hell and terrorized the ogres, but Goku and Paikuhan came to stop them. When Frieza sent the Ginyu Force after Goku, Goku defeated Reacoom last, elbowing him in the back of the neck, causing him to fall into the Bloody Pond. Later, Pikkon threw him, Burter, Jeice, Guldo, and Cell onto the spike, impaling them, and all seven villains were locked up in a cell.

Recoome was last seen in the Kid Buu Saga, in Hell/HFIL alongside several dead villains, watching the battle between Goku and Kid Buu.

Recoome made a brief cameo appearance along with several villains from the past in Dragon Ball GT. He was presumably defeated and sent back to Hell along with other villains.

In Dragon Ball Z Abridged, Recoome is seen as a parody of wrestlers in WWE, with him taking great pride in his wrestling abilities and overall manliness. He appeared alongside the rest of the Ginyu force when ever they appeared, always referring to himself in 3rd person. He soon got to fight Vegeta after winning the opportunity in the Ginyu's game show "Wheel of Torture", commenting on how "the lucky little bastard (Guldo) got two of 'em." After Vegeta killed Guldo, Recoome and Vegeta entered "Namekamania" (an obvious parody of Wrestlemania) and Recoome taunted him by talking about how Vegeta boasted about being prince of a powerful race who were all dead and with his signature catchphrase "THE NAME'S, RECOOME, AND IT RHYMES, WITH DOOM. AND YOU'RE GONNA BE HURTIN. ALL. TOO. SOOOOOOOOON!!!!!!!", only for Vegeta to tell him that Wrestling was fake.

He and Vegeta fought (with Burter and Jeice providing commentary) and he won, using special attacks that were really just normal moves with his name shouted in front of them, like the "RECOOME ELBOW" or the "RECOOME KNEE", with him getting uglier and uglier every time someone landed a good hit, leading to Krillin actually being disgusted at the sight of him. He soon defeated all three warriors. When Goku showed up, he was getting more and more annoyed at how Goku choose to heal his friends instead of fight him, only to be swiftly defeated in one punch and later killed by a healed Vegeta.

Despite his initial slightly brute attitude, Recoome is actually quite intelligent, using flamboyant poses, bullying behavior, and intimidation to get an angry reaction out of his prey. He acts in a rather goofy demeanor, but it is a ploy to manipulate those around him.

In the Japanese and most other versions, Recoome is signified by his rather intimidating, sadistic, yet somewhat childish voice. In the Funimation version, however, his voice is done in a way similar to a person who is mentally disabled. This has gained much criticism and controversy, especially noting as how his voice actor Christopher R. Sabat had originally used a voice more original to the character, apart from this gravely baking away from the character originally being quite intelligent.

Recoome is often believed to be the most flamboyant of the Ginyu force, next to Captain Ginyu, due to their constant poses. He is very a sadistic and crude individual, as noted by Jeice. That said, he is still caring towards his allies despite his treatment of Guldo.

Recoome can shoot multiple energy based attacks, and flight like many other Dragon Ball Z villains. Some of his energy attacks are his Recoome Eraser Gun, Recoome Renegade Bomber, and, presumably his most powerful energy based attack is the Recoome Fighting Bomber. The most notable about Recoome is both his very thick hide, since he has been beaten up and suffers little to no damage and that he fought Vegeta, Gohan and Krillin without any help from the Ginyu Force, and he has great physical strength.

Recoome is stated to have a power level of 71,000. Due to the fact that Frieza expected the Ginyu Force to be able to defeat Super Saiyan Goku (when they teamed up with Cell in Hell) it is likely that Recoome's power has increased to that level. This indicates that they went through some serious training while down in Hell. 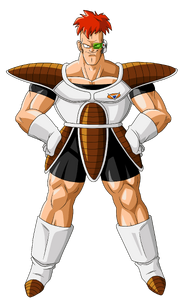 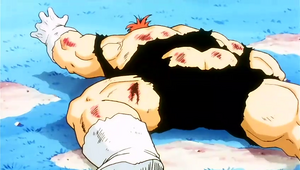 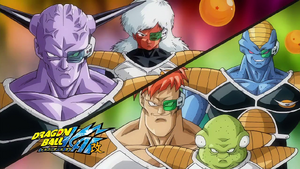 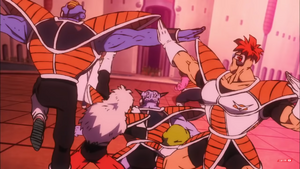 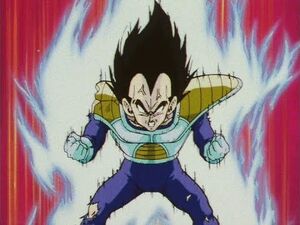