Fighting Mario (only to lose)

Prevent Mario and Goombario from getting to Toad Town.

The Red and Blue Goomba, also called themselves the Goomba Bros., are two Goombas who first appeared in Paper Mario.

It's recommended to hit the tree that holds a Goomnut with the hammer and use the Fire Flower to attack them and defeat the Red and Blue Goomba first to confront without problem the Goomba King. When all of them are finally defeated, they will retreat to the fortress but Mario can push a button that makes the fortress collapses, sending both Goomba King and the Red and Blue Goomba away to a mountain. 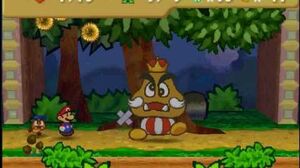 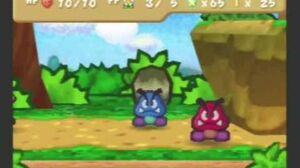