All Dogs Go to Heaven 2

Doing fortune-teling for his "unfortunate" customers.

Transport all dogs to hell with Gabriel's Horn (failed)

Red is the main antagonist of the 1996 animated film All Dogs Go to Heaven 2. He is a demonic feline from hell who desires to gain Gabriel's horn to transport all dogs from Heaven into Hell.

He was voiced by George Hearn, who also played Captain Ahab in 20th Century Fox's The Pagemaster.

Red is a powerful feline demon from hell who recruited Carface Carruthers in his plan to use the magical Horn Of Gabriel to pull all the dogs from Heaven into Hell. To this end, he tricked Carface's old nemesis, Charlie, into aiding him via creating magical collars and forcing him into a deal, under the disguise of an aged dog.

After Carface captured David and taken him to Alcatraz prison, Red intimidates him with his claws and threatens him as well. This climaxed in the demon managing to actually get the horn and he began to imprison the inhabitants of Heaven (including Annabelle) inside the Alcatraz prison while growing into a dangerous monster of seemingly apocalyptic proportions, causing the sea itself to start to rise around the island in a massive whirlpool.

However, Charlie and his friends decide to fight back. Charlie tried to attack him, but Red tosses him to the ground and attempts to kill him. Before Red can do so, David and the others stopped him by demanding him to leave Charlie alone, which Red scares them off. Suddenly, a pipe bursts and water splashes on Red, this giving Charlie an idea to defeat him. Red blocks David with his claws until Itchy intervenes and retrieves the horn. Red cynically hold David and the others hostage with his big claws and mocks Itchy with the choices as starts torturing them. But Itchy foil this by leaping in and tell the others to run for safety. Red corners Itchy, unaware that he had no horn until he notices Charlie with it and he proceed to chase him up to the roof. While Charlie climbs up onto the water tower with Red chasing him. Charlie is about to blow the horn, Red relentlessly tortures him with the magical red collar by shocking repeatedly as he confronts him. Fortunately, Charlie remembers the whirlpool and then letting Red's guards down by teasing him with dropping the horn and jumping off the tower for the latter to chase him. As Red is about to recapture the horn again, he realizing his mistake too late as the water tower falls towards the whirlpool, which splashes on the demonic cat and making him fall from the great height. Red (who had already been weakened in the battle by being splashed with water and then falling from a great height) is holding on the stairs from preventing himself of getting sucked back into hell and corners both David and Sasha while they walking up. The resulting in a battle that ended with Charlie blowing the horn, reversing the evil spell and sending all the dogs back to heaven.

Red (who had already been weakened in the battle by being splashed with water and then falling from a great height) was ultimately sucked back into hell for his failure with his last screams of agony. Before vanishing, however, Red returns and drags Carface down, as this was part of their deal because he unknowingly sold his soul to him for the red collars after Charlie mentions to Carface about what he trades for Red.

It is unknown about what happened to Red after his defeat.

Compared to Carface (who is money-hungry), Red is manipulative, power-hungry, prideful, merciless and psychopathic. He seems to be motivated by little else than his own desires to be as wicked as possible. Like all demonic entities, he prides himself on being sinister and doesn't approve of any "entry-level wickedness". In addition to being a malevolent and hellish feline, he also has the many characteristics of a cat, he eats rodents, he hates water (proven near the end of the film during the battle between him and Charlie), he thinks very low of dogs in general (especially his sidekick Carface), and he wants full control over them which plays a keen role in his goal to obtain the horn.

He is also very deceptive and persuasive, which is shown by repeatedly disguising himself as an elderly dog to manipulate his victims, and he is also very hot-headed, passionate, melodramatic, and sensational, acting unfriendly in a big way whenever his patience is tried such as when Red snapped at Carface over wanting to make money with the horn, but power seems to excite Red as well proven when Red gets Gabriel's horn, he takes no notice of anything going on around him and when Carface says Charlie and his friends are getting away Red only says "Let them".

Red is a demonic cat with red fur (hence his name), yellow eyes, long maroon fingernails, and wears a blue robe. In his dog disguise, he looks like a St. Bernard, and wears a red robe, a red scarf, a red fez, and a pair of red slippers. As a monster, he is gigantic, muscular, and has glowing red eyes. 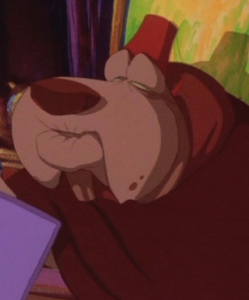 Red in his dog disguise. 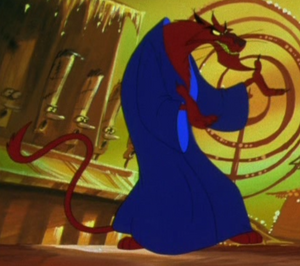 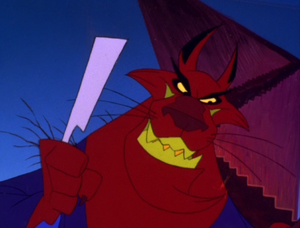 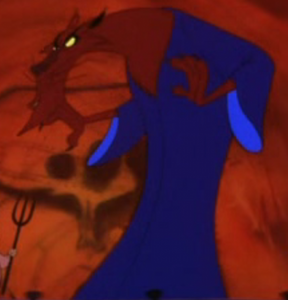 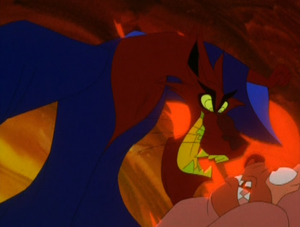 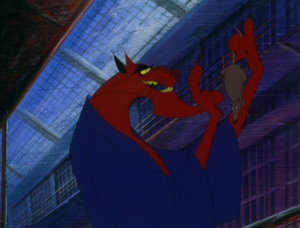 Red with a mouse; he is ready to eat. 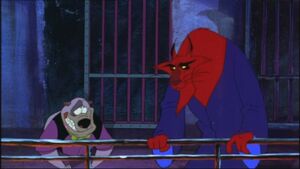 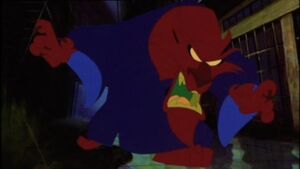 Red hates to be patient. 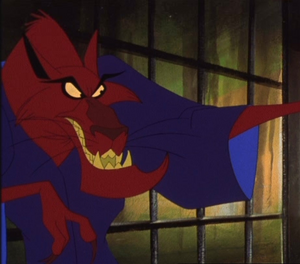 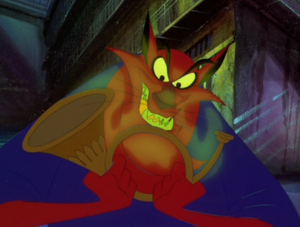 "Gabriel's Horn is finally mine!" 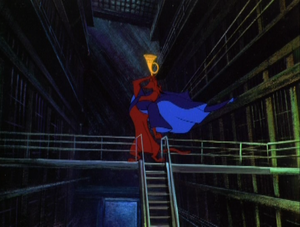 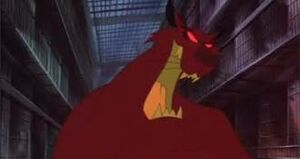 Red transforming into a huge cat 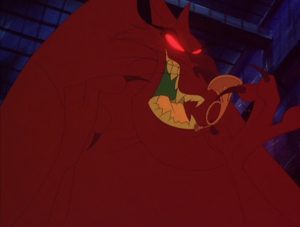 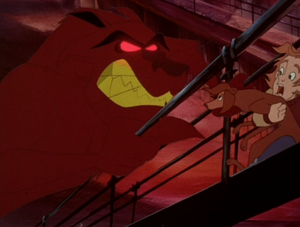 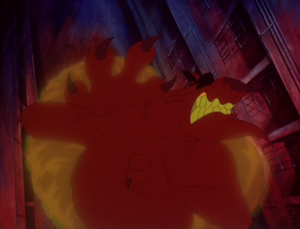 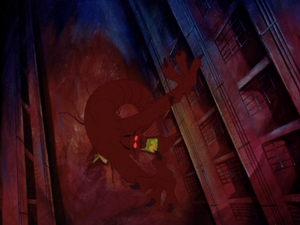 Red begin sucked into hell by his "boss" 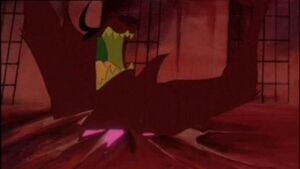 Red's defeat.
Add a photo to this gallery 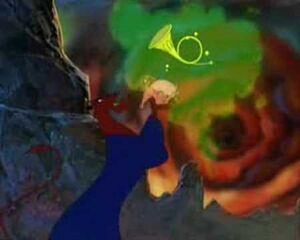 Retrieved from "https://villains.fandom.com/wiki/Red_(All_Dogs_Go_to_Heaven)?oldid=3967444"
Community content is available under CC-BY-SA unless otherwise noted.