The Spider Beast
The Red Monster
The Kaiju Devil

Kill Zach and his Kaiju (failed).

Red is the main antagonist in the NES Godzilla creepypasta. It is a demonic presence that seems to possess and control a second-hand copy of the 1988 Nintendo Entertainment System game cartridge Godzilla, Monster Of Monsters, and seems to have played a direct role in causing a great tragedy in the past of the protagonist named Zach.

Given a second-hand copy of the classic game bought by a friend at a garage sale, Zach begins to play it again, and at first is swept away by nostalgia. Yet strange things begin to happen in the game, things that Zach attempts to explain away. When the screen glitches oddly, he assumes that it is dirt and cleans the cartridge. When past Godzilla foes not seen in the original game show up, he assumes that he has latched onto a prototype or beta not widely released. When Godzilla foes not in existence when the game was made show up, he assumes someone hacked it (a very hard thing to do with a cartridge-based game). Yet things begin to quickly pile up that he can no longer ignore, such as the sound and graphics improving vastly past the point the old NES could ever dream of delivering.

Slowly but surely, the familiar, simple, and repetitive levels are replaced by ever more bizarre ones, replete with minor and major foes that become gravely disturbing, capped off by a personally invasive quiz level with questions that seem to be straight out of the Bridge scene in Monty Python And The Holy Grail. Even the background shows mind-bending horrors and almost emanate a sense of despair.

The Godzilla foes start to warp and shift, finally bearing no resemblance at all to their origins. King Ghidorah is replaced by a creature amalgamating all the twisted bosses fought so far, and he is far from being the last enemy in this version. Despite the aid of new monsters and even an angelic figure, Zach encounters the one who has directed all this. He calls the creature Red, and it starts by chasing his daikaiju across a landscape screen, able to kill even Godzilla with one shot. It soon becomes clear that this is no mere game-image, as Red seems to look at him from the screen, going so far as to threaten and taunt him.

Red even tells him that the suicide of his late girlfriend Melissa was all his work, possessing her as he has now possessed the game. Unable to let himself give up and wanting revenge on Red, Zach presses on and determines to beat the altered game. But Red is not above stretching the rules and even cheating. Even with Godzilla, Mothra and others to call upon, Zach is in for the fight of his life—and very possibly, a fight for his life, even perhaps his soul.

Red appears as a boss in the final level of the game, with four forms, his land form, his water form, his flying form, and finally, his final Red form. Red devours Mothra in his flying form and paralyzes Zach on his seat so he can't turn off the game, and creates a life-or-death situation with him. In his final form, Red kills Solomon, then he kills Anguirus, and he finally devours Godzilla. Red says "GAME OVER", but Melissa saves Zach and unlocks Acacius, the strongest monster in the game, which ultimately defeats Red with his life bar down to nearly nothing. Melissa revives Face, Solomon, Mothra, Anguirus and Godzilla, and says they are grateful for this.

A tribute to Red is set to appear someday in the Kaiju Combat games. The version of Red depicted there is stated to be only a fragment of the true Red's essence, one of the many scattered everywhere in the world by his clash with his foe, Solomon.

Shadow of Red will be a heavily offensive character, who generates energy by damaging the opponent. He will fight in his Ground Form, using primarily his sheer body weight to tackle the enemy, but also employing his claws and sharp tail. He shall have the ability to vomit hellfire out of his mouth at the cost of health and to cast a claw wave to stun opponents.

Red is a shapeshifter with multiple forms. His form of choice is the Ground Form: a bulbous body resting on four slender insectoid legs, two clawed arms and a thin long tail. He also has a Swim Form (resembling a fish), a Flight Form (resembling a bat), and a Final Form, a colossal reptilian creature with two legs and four arms. Some of his features always remain the same in every form: his body is always bloodred and wrinkled, and his face is always a frowning horror with empty eyes and mouth, comparable to a mask. When Red is angry, sometimes his eyes can emit an eerie light.

Red's personality can easily be described as pure evil. He seems to be a demonic and blasphemous creature of some sort (many screenshots referring to him are titled "Hellbeast") who revels in committing wicked acts and horrifying Zach (the narrator). He gloats to Zach that he has killed his girlfriend Melissa and continues torturing her soul as she is trapped in the game. His goal is to kill Zach and presumably trap his soul in the game, as well. He would have been successful in this task, had it not been for the intervention of Melissa's soul.

Red's in-game avatar has a vast array of powers which he reveals gradually throughout the story. During the chase scenes, contact with him is instantly fatal. He can choose between Ground Form, Flight Form and Swim Form for optimal pursuit, and can either smash obstacles in his way or devour them. He is also able to vomit a tangle of intestine-like tentacles from his mouth, with a cluster of hook-like claws and pharyngeal jaws at the end.

During the final battle against him, Red is no longer able to kill with every contact but gains many fearsome new powers. He goes through his Ground, Swim and Flight forms in quick succession, culminating with an awe-inspiring Final Form with so much health and power that only Acacius (the character given to Zach by Melissa's soul) can stand a chance against it.

His abilities now include vomiting torrents of hellfire and rains of needles, casting claw-shaped waves from his hands, as well as devouring opponents that are low on health. During the final battle, he also gains control over the player's body, being able to stop him from leaving and almost stopping his heart at some point. He also somehow "binds" Zach's soul to his characters', so each time the characters take damage, Zach feels it. 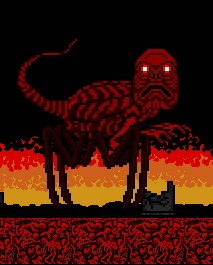 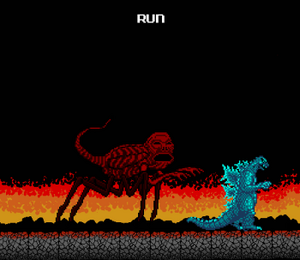 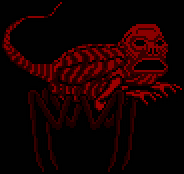 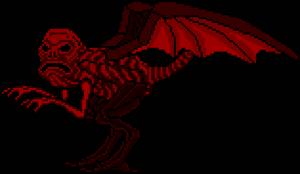 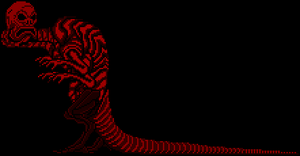 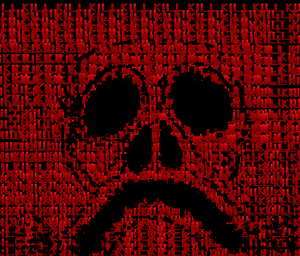 Red's face being formed by KILL. 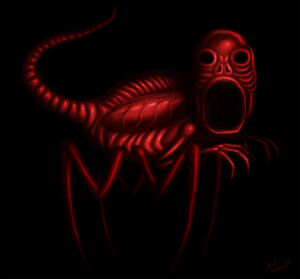 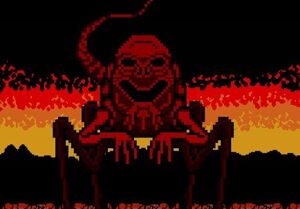 Red's evil grin
Add a photo to this gallery 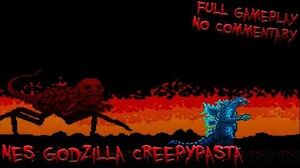 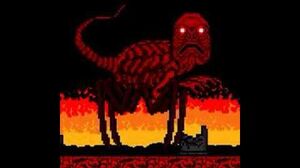 Red (Creepypasta)
Add a photo to this gallery

Retrieved from "https://villains.fandom.com/wiki/Red_(Creepypasta)?oldid=4215207"
Community content is available under CC-BY-SA unless otherwise noted.