Red the Elder (formerly)
The Traitor

Expecting everything to go right.

Destroy Spyro.
Aid the Sorcerer with sending everyone to the Shadow Realm via the Calamity (all failed).

Red, formerly known as Elder Red and Red the Elder, is the main antagonist of Spyro: A Hero's Tail, and the (former) secondary antagonist of Spyro Shadow Legacy. He was an Dragon Elder who wanted to see the true potential of magic but he ended up using it for dark purposes, causing him to be exiled and even earned the moniker The Traitor.

He was voiced by Jess Harnell, who also played Cedric the Sorcerer in Disney's Sofia the First.

After Red was banished, he was experimenting with dark magic, trying to see its true potential.

Then he encountered The Sorcerer, who corrupted him and sent him to do harness the dark gems and plant them. To aid him, The Sorcerer captured an ice fairy and embedded her into a crystal for Red to place upon his staff and to harness her magic.

Red's first act of terror was employing Gnasty Gnorc and his armies to plant the Dark gems across the realms. He imprisoned a little dragon called "Flame" inside Gnasty Gnorc's lair to rot there as a punishment.

After Spyro destroyed the Dark gems in the Dragon realms and defeating Gnasty Gnorc, a messenger tells Red that Gnasty Gnorc is now dead so in retaliation, Red froze him and shattered his corpse in front of the other terrified Gnorcs. He tells them to prepare and kill Spyro while employing a grotesque sea witch called Ineptune.

Once Spyro defeated Ineptune and she sank to the bottom of her lair,a terrified messenger tells Red this so in complete anger he deteriorated his heart and decided he should deal with Spyro himself so he leaves a mammoth to capture Spyro which was successful so he left the little dragon to rot in the citadel but unbeknownst to him Hunter saved Spyro so Spyro destroyed the barrier to his lair and Red finally confronts the little dragon and after a grueling battle, Spyro shattered his scepter. Red sees no way to win and flew off to his lab in the volcanic isle.

The Professor tried to infiltrate Red's lair but ended up captured and forced to build a new advanced army of robotic Gnorcs and mutated Dragons. After Spyro destroyed the three machines in red's lab which made the robots Spyro finally finds the professor but Red ambushes them and mocks Spyro but got slammed into the final machine shattering it but transforming him to a mechanical monstrosity. He throws Spyro into an arena and then gets bigger due to the professor trying to fix him but made him bigger on accident. Once Spyro destroyed Red's mechanical body the professor shrinks him down to a size smaller than Sparx. He tries to escape from Spyro but ends up being trapped in a glass bottle by the professor.

Red breaks free from his prison and using his magic grows back to normal size. Now looking for revenge he finds The Sorcerer and powers the Shadow Amplifiers which brought about the Calamity. Everyone believes him to be the main cause but in reality he was just a pawn and the secondary antagonist while The Sorcerer was the true antagonist. He captured bianca and got knocked out by Spyro causing him to gain consciousness of his own actions therefore wiping out The Sorcerer's corruption. He then took Spyro to The Sorcerer's Lair and taught him a spell to deflect his magic. After the Sorcerer flees, Red now prepares for the next attack and teaches other young Dragons how to harness magic and is now a redeemed dragon elder.

In Spyro: A Hero's Tail, Red is a manipulative and merciless outcast who is driven by rage and corruption wanted to see the dragon realms crumble. He doesn't like it when his plans go wrong and even executed his own minions just so they will work harder. He considered Spyro nothing of a threat at the beginning but as the game progresses he gets more drastic and murderous.

In Spyro: Shadow Legacy, he is shown to be just as as evil but he was more of the tragic villain as you found out he was corrupted. After he reformed, he was shown to be a kind, strong, and persuasive dragon, preparing for the hate of others because of his crimes.

Red is a powerful sorcerer who is greatly skilled in dark magic and he wields his scepter which is a tall wooden staff with magical crystals attached to the top of it. He uses his scepter in casting spells against his enemies and harnessing his magical powers. He is shown to be an adept cryomancer who had no problems with using ice based attacks. He was also shown to have generic dragon abilities such as strength, flight and flames, and can summon his minions in his fight against Spyro.

He is also proven to be a clever manipulator, as he manipulated Gnasty Gnorc and Ineptune to deal with Spyro.

As a mechanical hybrid, he is capable of extreme physical strength, has high endurance, can create tracking mines, has rocket powered boots, Able to launch rockets, laser eyes and his great size means he can intimidate his enemies.

Red is considered one of the more serious Spyro villains and had positive feedback about him, only having criticism about his name and how his past was not really dwelled into. 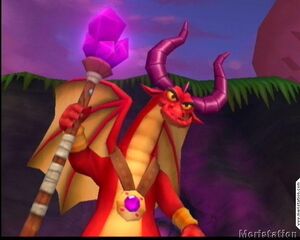 Retrieved from "https://villains.fandom.com/wiki/Red_(Spyro)?oldid=4047899"
Community content is available under CC-BY-SA unless otherwise noted.