Each members possesses their own unique powers in combats

Protect the world at large from criminals.

Bring back Axl by force to return stability to the Red Alert Syndicate.

The Red Alert Syndicate is the main villainous faction from Mega Man X7.

The Red Alert is a Reploid organization which acts as a vigilante Maverick Hunter group, having emerged during a time when X left his position as a Maverick Hunter and a rise in Maverick activity. Due to their illegal status, however, they were labeled as Mavericks and thus are hunted down as criminals. The group rises above other vigilante Hunter groups thanks to Axl, a Reploid with the ability to shapeshift into other Reploids.

Before X7's events, Red Alert's leader Red meets with a person who identifies himself only as "The Professor". This Professor teaches him how to use the DNA copied by Axl to enhance his and his fellow Red Alert member's abilities. This, in turn, makes Red Alert's members become more violent, so Axl, having noticed the change in his friend's behavior decides to leave the group, only to be hunted down by them and end in a direct confrontation between Red Alert and the Maverick Hunters, who take Axl under custody and eventually accept his help to take down Red Alert after he reveals the situation to them.

As it turned out the Professor was none other than Sigma. When Red refuses to take more DNA from Axl, he turns Red Alert members into Mavericks and forces Red to cooperate with him, as he wanted to use Axl to copy X and Zero's DNA. Red releases various Mavericks that were under their custody, challenging the Hunters with Axl as the prize. The Hunters and Axl eventually confront Red himself and after defeating him finally learn of Sigma's involvement. With Red's demise, the group is disbanded. 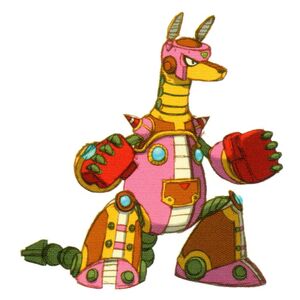