Ebirah, Horror of the Deep

To establish a new world order through nuclear war.

Terrorists, Military Villains
The Red Bamboo are an evil terrorist organization and are the secondary antagonists of Ebirah, Horror of the Deep.

The Red Bamboo is an international terrorist organization that operates on the seemingly deserted Devil's Island in the South Pacific. The Red Bamboo have a base in the center of the island, powered by a nuclear reactor, in which they produce nuclear weapons. Devil's Island is guarded by the monster Ebirah, but the Red Bamboo are unable to control him. Therefore, the Red Bamboo frequently raid nearby Infant Island and kidnap the peaceful natives living there, forcing them to produce a juice from a fruit on Devil's Island, which holds back Ebirah and allows the Red Bamboo to enter or leave the island by sea.

The size and origin of the Red Bamboo is unknown, but the supreme commander of the Devil's Island base references a "headquarters," suggesting there is another cell of the organization somewhere that oversees the group operating on Devil's Island. The Red Bamboo's goals are mostly unknown, however it seems they have their own private army including tanks, battleships, and fighter jets, as well as an entire nuclear arsenal. This suggests that they plan to start a nuclear war and rise to power.

After their yacht, the Yahlen, was wrecked, four castaways washed up on Devil's Island, which appeared to be deserted. They moved to the interior of the island, looking for any people that might be living there. Eventually, they found a dock, where a large ship was dropping anchor. They watched as armed men brutally removed dozens of captured natives from the ship. A few of the natives tried to escape. One of the Red Bamboo soldiers mowed several of the natives down with a machine gun turret, but two natives reached a boat. The Red Bamboo captain, Ryuui, told his men to hold their fire and let Ebirah finish the escaped prisoners. Suddenly, the giant lobster monster known as Ebirah rose from the ocean and destroyed the boat. The then impaled the natives on his claw and ate them whole, before diving back under the waves. Ryuui told the other prisoners to remember what happened to the men who tried to escape, then ordered them taken away. One of the prisoners, Daiyo, escaped in the confusion.

Ryuui reported to his commander that the new shipment of slaves had arrived and was ready to work. The Commander was pleased, and alerted Ryuui that they needed to increase weapon production, as headquarters was demanding more weapons. Ryuui agreed and went to the weapons factory. Inside, he encountered Daiyo and the four castaways, who had broken in, and ordered his men to kill them. A member of the group, Yoshimura, used a smoke bomb to confuse Ryuui and his men, allowing the group to escape. The Red Bamboo chased the five to a rocky cliff, but gave up the chase when it appeared they all jumped to their deaths. In reality, they had dropped onto an overhang, leading into a large cave, where they found Godzilla sleeping. The group decided they couldn't stay in the cave, and tried to infiltrate the Red Bamboo's base again. The group was discovered during their infiltration, and the Red Bamboo captured one of them, while another, Ryota, was accidentally carried off by a weather balloon. The three remaining members of the party returned to the cave, and decided to wake up Godzilla and make him fight the Red Bamboo. Using a sword and conductive copper wire, they caused lightning to strike Godzilla and wake him up. Godzilla emerged from the cave, and waded out to sea, where he was attacked by Ebirah.

Seeing that Godzilla was awakened, the Red Bamboo commander ordered a group of fighter jets to attack Godzilla. After Godzilla defeated Ebirah and the Giant Condor and was resting on a rock, he was attacked by several fighter jets. The jets' missiles had no effect on Godzilla, and he easily destroyed all of them. Godzilla then attacked the Red Bamboo's base, destroying the weapons factory and breaching the nuclear reactor that powered it. Out of options, the commander ordered the reactor to be armed for detonation and ordered all remaining men to retreat. Red Bamboo soldiers stormed the enclosed area where their prisoners were forced to make the juice that held off Ebirah, and took all of the juice, leaving the prisoners locked inside to die. The commander, Ryuui, and the remaining Red Bamboo soldiers tried to escape Devil's Island in a boat, but unbeknownst to them the prisoners had concocted a fake batch of the juice, and Ebirah destroyed the boat, killing the remnants of the Red Bamboo.

With the Red Bamboo defeated, Godzilla did battle with Ebirah again, this time defeating him for good, while Mothra arrived and rescued all of the prisoners as well as the castaways. Godzilla and Mothra both fled the island just before the reactor detonated, wiping Devil's Island off the map in a mushroom cloud. 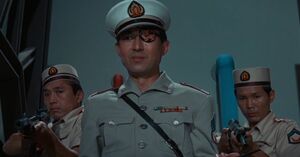 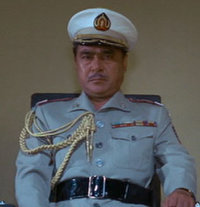 The Commander of the Red Bamboo

A Red Bamboo ship, releasing the yellow juice that holds off Ebirah