Linlei (Doraemon: The Record of Nobita's Parallel Visit to the West)

Doraemon: The Record of Nobita's Parallel Visit to the West (as Linlei)

Breathes supernatural fire that cannot be extinguished with water

Hand-to-hand combat
Immortality or long lifespan (as Shancai, currently)
Able to create fake body of himself
Deception
Equipped with dual feet wheels that enable him to fly

Abusing the Earth deities at his location.

The Red Boy (in Chinese: 紅孩兒), also known as the Boy Sage King (in Chinese: 聖嬰大王), and later known as Shancai as the Bodhisattva Guanyin's servant, is one of the major antagonists in the 16th-century Chinese classic novel Journey to the West by the late Wu Cheng'en, and its multiple adaptations. He is the son of the Bull King and Princess Iron Fan. In the film Doraemon: The Record of Nobita's Parallel Visit to the West, he is named Linlei, serves as a supporting antagonist-turned-supporting protagonist of the movie. Red Boy is considered to be one the few most powerful demon who almost managed to kill Sun Wukong and unknowingly destroyed the brotherhood between Bull King and Wukong.

The Red Boy is like a mischievous kid mixed with a brutal demon lord, who displayed several kid-like traits, such as laughing and seeing killing human as a children's hobby.

After being redeemed and now as Shancai, he is now a good person and had purged himself out of his evil permanently.

Red Boy is the ferocious son of the Bull King and Princess Iron Fan. Upon hearing about Xuanzang's arrival to his mountain, he attempted to capture the monk so he can eat the latter's flesh and extend his lifespan. Although a young child, Red Boy is fiercely independent kid who lived solitary life away from his parents, even reigning over lesser demons with his mighty power.

Red Boy first disguised as a kid, tied up naked on a tree, fabricated a story that his family was assaulted by the thugs. Wukong saw his true nature right away, but since Xuanzang refused to believe, Wukong had to carry him along the way. On the way, Wukong killed the boy, but the Red Boy had managed to left a fake body before thus escaped death, and kidnapped Xuanzang. Sun Wukong had battled against Red Boy in hopes of rescuing his master. Despite Wukong's words, Red Boy did not believe that his father the Bull King was Wukong's sworn brother (which technically made Wukong a relation of his). Red Boy then tried to kill Wukong by five carts (representing the Five Elements) that emitted in great amount of fire that had the power to blot out the heavens, but Wukong cast a fire resistance spell and chased after him. Believing that he had defeated Sun Wukong, Red Boy went back into his cave in glee.

Sun Wukong along with his brother Zhu Bajie, encounter and fight Red Boy once more. Red Boy, feeling outmatched, unleashes his most powerful sorcery yet: Samadhi Fire (三昧眞火). Sun Wukong asks for some rain from the Eastern Dragon King to counter Red Boy's Samadhi Fire, to no avail as but Red Boy's fire is inextinguishable to normal efforts to quench fire with the rain in fact intensifying the flames. Caught directly by the flames, Sun Wukong is ultimately almost burned to death by the flames and he finally resorts to asking for the help of the Bodhisattva Guanyin, and lured the Red Boy out of his cave. As Red Boy is fighting Wukong in a forest, he found Guanyin's empty lotus throne, thus he sat in it, imitating Guanyin's posture. Suddenly the lotus throne transformed into swords, which pierced and wounded him. Worse, when he tried to take them out, they then transformed into halberds, which trapped him. In pain, Red Boy then pleaded for Guanyin to release him, with the exchange of him being Guanyin's permanent disciple, and was given the name 'Shancai' (善財).

She then withdrew the blades and healed Red Boy's wounds, only for him then attempted to attack the her once more. She then threw a golden band which multiplied into five and fixed it around his head, wrists and legs (which were similar to the magical band around Wukong's head), which tightened after Guanyin recited the mantra "oṃ maṇipadme hūṃ", causing pain to Red Boy, thereby subduing him. Red Boy, unable to remove the bands, eventually bowed in defeat and accepted his redemption.

In many chapters later, the Red Boy was mentioned by his uncle and his parents, who believing that Sun Wukong had harm him and attempted to avenge him, though none of them succeeded. In a later chapter, when Wukong was sent away by Xuanzang once again (the second time ever since the Baigujing incident), he met the Red Boy on his way to met the Bodhisattva Guanyin, now goes by the name Shancai, who joking to him, much to Wukong's anger, before letting him to meet his mentor. The former demonic kid is now redeemed and is a permanent deity.

In this incarnation, the Red Boy is named Linlei. He at first pretended to be Xuanzang's companion, lured him, alongside Doraemon, Nobita, Shizuka, Suneo and Jaian into his parents' cave. Seeing them are about to be eaten by his parents, Linlei showed regrets about it, and Xuanzang revealed that he knew Linlei is on the side of the demons all along, but nevertheless still forgive him. Linlei then secretly released the group. When the Bull King was killed by Nobita (who he believes to be Sun Wukong), the magics that the demons caused were disposed, caused the Queen Iron Fan to fall into the lava, much to Linlei's grief. Later on, in honor of his parents and the other demons, Linlei redeemed himself and joined Xuanzang as the latter's actual companion and traveled to India. 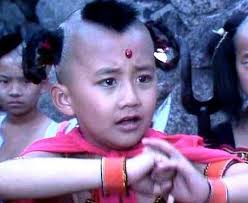 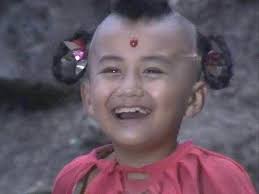 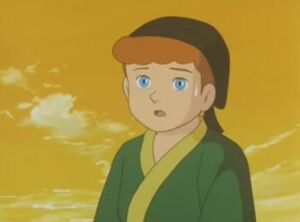 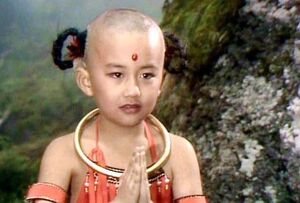 Retrieved from "https://villains.fandom.com/wiki/Red_Boy?oldid=3552131"
Community content is available under CC-BY-SA unless otherwise noted.