Retrieve the Relic of Moirai

The Red Falcon is a mysterious organization who acts as the main antagonistic faction in the Contra series. It was created by an alien entity known as Java. Java fell into earth inside a meteorite and started to use brainwashed humans to do his bidding.

The Red Falcon fortified the Galuga Archipelago near New Zealand, using the place as their main base of operations, gathering forces and staging the Alien Wars, which would result in the destruction of most of the planet and the death of countless people. The Red Falcon is composed not only of well-armed and brainwashed humans but also of various alien abominations.

The organization's goal is to annihilate the human race, making way for the aliens to claim Earth as its own and repopulate the planet with their alien brethren: this was the common belief everyone on Earth believed until events in Shattered Soldier revealed something else entirely, negating previous stories regarding Red Falcon's intentions.

As revealed in Contra: Shattered Soldier, the main reason Red Falcon targeted Earth is that the Triumvirate, Earth's government in the series, stole their relic which was kept hidden in Jupiter prior to the events of the series. Red Falcon was Relic's defensive program: Should Relic be stolen from its resting place, Red Falcon is to activate and retrieve the Relic at any cost.

But Lance Bean did not die: he was revived when his body was merged with alien cells. After his resurrection, Lance created a successful organization: Blood Falcon. But with alien cells genetically programmed to safeguard Relic of Moirai above all else, Lance Bean could not defy his body's "will".

Bill Rizer along with his new partner Lucia would later destroy the Triumvirate and the Relic of Moirai, finally putting an end to the cursed fate between Bill Rizer and Red Falcon for good.

Even though Red Falcon as an organization has long ceased to exist, its life did not: in Neo Contra which takes place in 4444 A.D. some hefty centuries after events of Shattered Soldier occurred, Neo Contra faction possesses cells and genes of the aliens belonged to Red Falcon and makes their nostalgic appearances. But this time, they are not the central plot of the Neo Contras plot line.

Java (天王鬼龍神 ジャバ, Uranian Demon Dragon God Java) is the main antagonist in the original Contra, and a recurring boss in the series. One of the masterminds behind the Red Falcon organization, Java appears as a large, elongated alien head without eyes and large teeth. Despite having no eyes, it can apparently perceive its surroundings, as it will attack as soon as the player approaches it. Java once again mkes his appearance in Contra III.

Despite its fierce appearance, Java remains immobile in all of its appearances, attacking mainly by spitting small floating aliens which track the player. Java is always fought right before Gomera Mosking, meaning that its defeat is not the end of the alien menace.

Demon Beast Head Bundle (鬼頭獣バンドル): Bundles slowly move around and try to run into Bill and Lance; they have no other form of attack. They are easily destroyed, but they should be taken out quickly, as larger numbers can be overwhelming.

Gomera Mosking (天王創魔心ゴメラモスキング, Emperor Demon Evil Heart Gomera Mosking) is the final boss in the original Contra, and the second most recurring boss in the series after the Gunner Wall. It is a gigantic alien heart which is responsible for spawning the countless aliens fought during the games. In the earlier games, it would be fought right after defeating Java, but it would later appear on its own in later installments.

Gomera Mosking is for the most part a sitting duck, since it has no means of defending himself. However, it is always surrounded by small cocoons (usually four or six depending on the game) which constantly spit out facehugger-like aliens. The best strategy to take down this boss is to concentrate on destroying the cocoons first, leaving the boss defenseless.

Wicked Ovum Egglons (妖卵エグロン) release baby aliens in the form of Buggers. They must be destroyed in order to prevent further Buggers from appearing and interfering with Billy and Lance's mission. Appear in every Contra Series. Their motifs are unmistakably from Ovomorphs belong to Alien Franchise.

Demon Insect Guard Bugger (把妖虫バッカー) hop out of Egglons and run along the floor to attack, or run across the ceiling and dive down. They will defend Gomera Mosking that feeds the alien base with their lives. Also appear in every Contra Series.

They are spider-like alien enemies that are encountered in the first Contra, and the game's sequels. They also endlessly reproduce and spawn from Egglons. They are known to appear during the boss battle with the Alien Heart. They also reappear in the NES version of Super Contra in the 7th level, hatching from Egglons again, but they are much smaller though. Their designs are unmistakably influenced by Facehuggers from Alien Franchise.

Slave Beast Taka (奴隷獣タカ) is a recurring boss in the Contra series, appearing in Contra III: The Alien Wars and Contra: Shattered Soldier as the very first boss in both games. A similar boss appears in the non-canon Contra: Legacy of War.

Taka appears as a large tortoise-like monster, busting out from a wall to face the heroes. It mainly attacks by spitting out maggots and releasing bees from the cavities in its shell. It will also stretch its neck to attack and shoot a laser beam from its mouth. In the rematch in Shattered Soldier it attacks in most the same way, but once its head is destroyed Taka will turn on its back, revealing a gruesomely large human-like face. It will once again release bees and maggots, as well as vomiting on the place.

In Contra: Legacy of War, Taka had two attacks unleashing its flamethrower and releasing bug like aliens towards the player.

In Contra: Shattered Soldier, Taka acts and behaves as the same way in Contra III.

Big Fuzz (大覚ロボビッグファズ, Great Awakening Robo Big Fuzz) is a recurring boss in the Contra series, appearing in Contra III: The Alien Wars and Contra 4. He also appears in the non-canon game C: The Contra Adventure.

Big Fuzz appears a gigantic, Terminator-like robot who protects the Red Falcon's factories. In all of his appearances, he makes his entrance by using his hands to force open the large iron doors of the factory, proceeding to attack the heroes. His main form of attack is to breathe a continuous stream of fire, but he can also shoot eye lasers and deploy time bombs.

In Conta 4, he will crawl through the narrow corridors of the factory to pursue the player.

The Metal Alien is a boss from Super Contra and Contra III: The Alien Wars. It appears as a winged humanoid alien very reminiscent of the Xenomorphs from the Alien series, who serves as the last challenge before the heroes can be granted an audience with the mastermind Gava.

In its first appearance, the Metal Alien would stay out of reach while spitting homing shots, eventually sweeping after the player and attacking with its tongue. On the rematch in the third game, the Metal Alien is fought while climbing a wall, giving little room for the player to maneuver. This time it attacks mainly by using its prehensile tail to stab the heroes. After taking some damage, it will begin teleporting, making it harder to hit him.

Gava (天王鬼ギャバ, Emperor Devil Gava) is the main villain and final boss from Super Contra and Contra III: The Alien Wars and a major recurring boss in the series. The "sister" of Black Viper, Gava is a large skeletal alien with a bulbous head and elongated snake arms with faces on them.

On its first attack on Earth, Gava and the Red Falcon forces under its command take over a military base and brainwash the soldiers to serve them, which prompts the government forces to send Contra soldiers Bill Rizer and Lance Bean to fight them. After fighting through the alien-infested base, the two confront Gava and defeat it, putting a halt to the alien's operations. Two years later, Gava once again appears, descending from the skies with the Red Falcon forces and annihilating an entire city, thus beginning the Alien Wars. Bill and Lance are once again sent to fight the Red Falcon's forces, along with various other soldiers, many of which perish during the combat. Bill and Lance eventually reach Gava's lair, fighting the many alien abominations within and finally destroying Gava for good. Despite its death, Gava would be revived many times throughout the series by the use of the alien cells which are collected by the government in the aftermath of the Alien Wars.

Kimkoh (陰獣キムコウ, Shadow Beast Kimkoh) is a recurring boss in the Contra series, originally appearing as the final boss in the NES version of Super Contra. It appears as a insectoid freak with a large hollow leg and a woman's face inside its constantly open mouth. It will always show up in the final stages of the games it appears.

Kimkoh's main form of attack is to shoot spores from his foot, which rain down in the screen. In its original appearance it remained stationary, but later appearances showed this boss is very mobile, as it can also bury itself, jump and ram at the player.

Kimkoh once again returns in Contra: Shattered Soldier: Lance Bean transforms into this creature to fight his former comrade, Bill Rizer. This time there will be two Kimkohs bent on killing Bill Rizer. 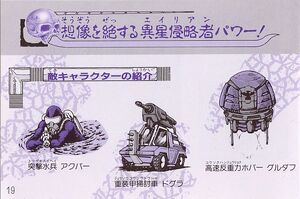 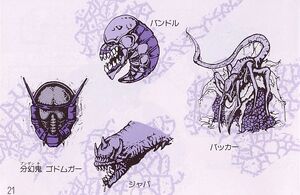 Retrieved from "https://villains.fandom.com/wiki/Red_Falcon?oldid=3812100"
Community content is available under CC-BY-SA unless otherwise noted.