Pokémon: Genesect and the Legend Awakened

Leader of the Genesect Army

Searching for their home.

Building their nest.
Attacking anyone who is a threat to the Genesect Army.

It was voiced by Kōichi Yamadera in Japanese and by Scottie Ray in English.

Prior to the events of the anime and sixteenth movie, the Red Genesect and its minions were created by Team Plasma in their laboratory. After the creation was a success, they all use Techno Blast at Team Plasma, causing them to retreat. The Red Genesect then led them out of the burning lab and then escape by attempting to return to their homeland. Though it did not appear in the anime series in person, it appeared many numerous times in flashbacks and are mentioned several times by Team Plasma Grunts.

During the nighttime, it led its teammates to invade Pokémon Hills where they forced the Pokémon residing in the area to leave and then started building their nest atop of the power generator. A Feralitgatr living in the Pokémon Hills tried to stop them but ended up in a fight with the Shock Drive Genesect and Red Genesect, who manages to defeat the Feralitgatr with its Blaze Kick. Mewtwo then arrives and saves the Feralitgatr just in time and then tries to convince the Red Genesect to join them live peacefully. The Red Genesect refuses to listen to such "orders" and the two fought throughout New Tork City and then controls the Genesect Army fought Ash and his friends, who alongside with the Douse Drive Genesect and the Pokémon residing in Pokémon Hills. During the fight, Mewtwo then discovers that the Red Genesect refuses to listen to such reason and believes that the Genesect do not deserve to live in the modern world. After the fight throughout the city, the two then went back to Pokémon Hills, where the Red Genesect saved its teammates, who are defeated by the residing Pokémon and then controls the Genesect Army to attack all opposing Pokémon. When they are about to deliver their final attack, Ash stepped into the way to protect them. Before being hit by the blast, the Douse Drive Genesect stepped into the way to protected Ash and got badly hit. Thinking that the Douse Drive Genesect is dead, they attack they resident Pokémon in formation, who are then protected by Mewtwo. Afterwards, Mewtwo then took on the four Genesect alone.

The Red Genesect takes on the main antagonistic role in the film, and its personality is far more aggressive than that of its companions. It possesses the ability to force the other Genesect to follow its orders against their will, and often uses this power to gain assistance in its own attacks. It is the last of the Genesect to listen to reason, stubbornly hanging on to its anger at its perceived enemies until the very end. 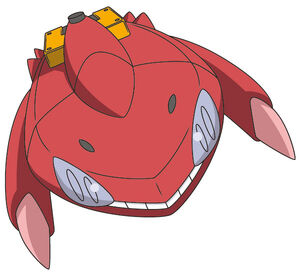 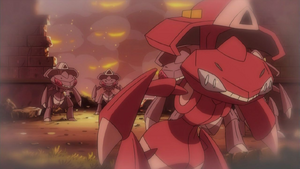 The Red Genesect and its army destroying a building as seen in a flashback. 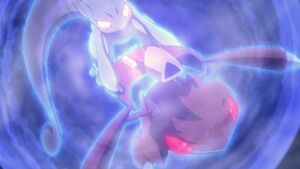 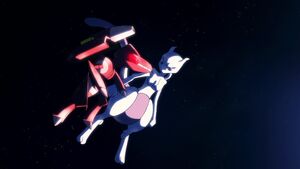 Red Genesect finally understands that Mewtwo is not his enemy. 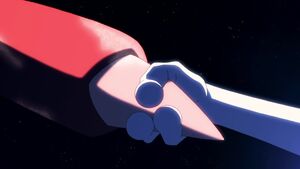 The end of the conflict between Red Genesect and Mewtwo.