The Red Goddess is the empress-goddess of Hell and main antagonist from the video game Agony.

She was voiced by Karen Strassman.

She existed since the day God created the Humanity. When she has the chance, she gladly plays with God's creations and pleasures her self in their sufferings. Eventually she will start taking interest in wanting to take God's powers and start ruling the Heaven.

She assisted Nimrod by giving him various demon powers and replacing him to the first half-breed to start walking the Earth. She gives him a test to check if he seriously meant what he wanted, sending him to one of the coldest mountains in the world, in which no human survived. Once he impressed the Goddess with his will to actually stay alive in the cold, she brought him back to his kingdom with much more powers inside of him.

As she got much more impressed by his works, which made the Goddess give more powers to him. She also though of the idea of making Nimrod the leader of hell, but if she gave him the leadership, she would want to him her slave.

The Goddess then finds out that Nimrod became poisoned by one of the slaves, descending to the Earth. So she became angry and pushed him into Hell.

She is very seductive and manipulative and lustful of her powers. She loves to dominate others in order to please her in sexual manners. She is also very obsessed with Nimrod, wanting to humiliate him or make him loyal to her. Out of everyone, she mostly enjoys seeking Nimrods suffering and tries to seduce him in any chance she possibly gets. Even though Nimrod betrayed her in the past, she still has a massive obsession with him. 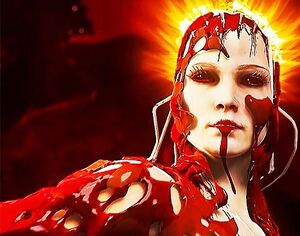 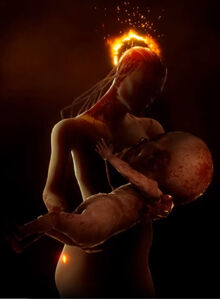 Retrieved from "https://villains.fandom.com/wiki/Red_Goddess?oldid=3891495"
Community content is available under CC-BY-SA unless otherwise noted.