Hunting down the Hulk.

Capture or destroy the Hulk at any cost (initially succeeded).

Destroy the Avengers and label them as terrorists in order to become a hero instead (failed).

He is a rogue U.S. military general and the archenemy of the Hulk, whom he his obsessed with capturing for his own purposes. This adaptation of Ross is arguably far more heinous than any other version of the character.

In his human form, he is voiced by Keith Ferguson, who also voiced Reaper in Overwatch, Flintheart Glomgold, Captain Peghook, and Jeeves in DuckTales; Lord Hater and Mandrake the Malfeasant in Wonder Over Yonder, Marluxia in Kingdom Hearts, Liquidator and Megavolt in Darkwing Duck, Eagleator in Unikitty!, Morg in The Grim Adventures of Billy & Mandy, Muck, Gunk, and Grime in Sofia the First; Warthog Monster in Star vs. the Forces of Evil, Bronze Boogie Boarder in The Powerpuff Girls, The Hasselback Gang in Amphibia, Professor Nibbles in Phineas and Ferb, and Viktor in New Looney Tunes.

While in his Red Hulk form, he is voiced by Fred Tatasciore, who also voiced Annabelle the Doll in Annabelle, Kakuzu and Gato in Naruto, Dennis in The Spongebob Squarepants Movie, Mor'du in Brave, Shao Kahn in Mortal Kombat Legends, Pound, Blanko, and Bang in Teen Titans Go! See Space Jam, Zeus in God of War: Ghost of Sparta, President Stone in Astro Boy: The Video Game, Dwayne LaFontant in Over the Hedge, Sandman and Scorpion in Spider-Man: Friend or Foe, Lord Dominator and Kragthar in Wander Over Yonder, Jonathan in Tarzan, Megatron in Transformers: War for Cybertron, Romeo (Jack) in Minecraft: Story Mode, Monty in The Angry Birds Movie, Cthulhu, Thanapod, and Dracula in Love, Death, & Robots, Major Force in Batman: The Brave and the Bold, Poachers and Teetsi in Madagascar: Escape 2 Africa, Cerberus in Scoob!, Carnage in Spider-Man: Scattered Dimensions, the Hun Army in Mulan, 8 in 9, Graviton and Mandrill in Avengers: Earth's Mightiest Heroes, Strykore in Skylanders Academy, Rhino in Marvel's Spider-Man, Bad Bill in Rango, Yeti in Expedition Everest, Fenris Wolf in Thor: Ragnarok, Blue Fangs in Castlevania, Frollo's Soldiers in The Hunchback of Notre Dame, General Gato in TMNT, Pirates in Treasure Planet, CLU 2 in Tron: Legacy, Friends on the Other Side in The Princess and the Frog, Carnage in Ultimate Spider-Man, Grindor in Transformers: Revenge of the Fallen, Amazo in Batman: Under the Red Hood, Poseidon in God of War, Goldar and Putty Patrollers in Power Rangers, Rocksteady in Teenage Mutant Ninja Turtles, Ringmaster and Ultron in Avengers Assemble, King Fossa in Madagascar: The Video Game, Atrocity in Spider-Man: Edge of Time, Atlas and Persian King in God of War: Chains of Olympus, Diego Gomez in Resident Evil: Vendetta, Fossas in Madagascar, The Mawgu and King Gorge in Nicktoons: Battle for Volcano Island, Goblins in The Spiderwick Chronicles, Screaming Mantis, Raging Raven, Crying Wolf, and Laughing Octopus in Metal Gear Solid 4: Guns of the Patriots; Joker's Gang, Penguin's Gang, Solomon Grundy, Mister Hammer, and Bane in the Arkhamverse; Saren Arterius in Mass Effect, Dingodile in Crash Bandicoot 3: Warped, Dr. Ludvig Maxis and Demonic Announcer in Call of Duty: World at War, Armus in Star Trek: Lower Decks, Nixels in Mixels, Typhon in God of War 2, Mordekaiser in League of Legends, Nikolai Belinski in Call of Duty: Nazi Zombies, Pentagon Thief in Call of Duty: Black Ops, Lust, Wrath, and Sloth in Shazam!; Sporde in The Powerpuff Girls, Buff Frog and Beard Deer in Star vs. the Forces of Evil, Alien X and High Override in Ben 10, Komodo Brothers in Crash Bandicoot: N. Sane Trilogy, Donald Trump in Robot Chicken, Repo Mantis in Rise of the Teenage Mutant Ninja Turtles, Agandaur in Lord of the Rings: War in the North, Island Head Beast in Gravity Falls, Anti-Pop's Minions and Geese in Regular Show, AAARRRGGHH!!! in Wizards, Harvey Weinstein in Family Guy, Otabin and Demon Hunters in The Owl House, Gahri in Kung Fu Panda: Legends of Awesomeness, Phantom in Scooby-Doo: Mystery Incorporated, Wildebeests in The Wild, Don Corneo in Final Fantasy VII Remake, Komodo Monday in The Secret Saturdays, Mandarin in The Invincible Iron Man, Mephistopheles in Call of Duty: Infinite Warfare, Captain Sen in Jade Empire, Helm Hammerhand in Middle Earth: Shadow of War, Jubair al Hakim in Assassin's Creed, Shambhala Guardians and Draza in Uncharted 2: Among Thieves, Tony Alpert in Battlefield Hardline, High Priest of Chaos in Call of Duty: Black Ops 4, Kralkatorrik in Guild Wars, Eddie Cassano in Great Pretender, The Tank and Boomer in Left 4 Dead, Carl the Grim Rabbit in New Looney Tunes, Saberhorn in Transformers: Robots in Disguise, Tuma in Bionicle, Letz Shake in No More Heroes, Neftin Prog in Ratchet & Clank, Krankenstein and Cuckoo Clocker in Skylanders: Trap Team, Mega-Mix in Crash Bandicoot: The Huge Adventure, Magmatron and Gatto in Tales of Arcadia, Tabitha in Fallout: New Vegas, Warden Kuril in Mass Effect 2, Daniel Pinkerton in Uncharted: Eye of Indra, Witch Doctor in Hero Factory, Andrew Taronne in SWAT 4, Frost Tiger in Viewtiful Joe 2, and Krackenstein in Randy Cunningham: 9th Grade Ninja.

At some point, General Ross began his endless campaign to hunt down and capture the Hulk, having no regard for anyone who gets hurt in the process. Eventually, at some point, he tracks hims Hulk to Las Vegas, where he was fighting the Absorbing Man. Eventually, he became enraged how two S.H.I.E.L.D. agents (Black Widow and Hawkeye) intervened as well. Ross then recklessly fired a missile at Hulk, not caring if the agents got hurt or killed. After the Hulk stopped the missile and saved their lives, the agents captured him and Nick Fury ordered Ross to stand down, enraging the general.

After Hulk left the Avengers due to being mistrusted constantly, Ross and his Hulkbuster Unit attempted to capture him again in a forest region near the Canadian border. They were stopped by Hawkeye, forcing them to retreat.

Losing all traits of his humanity, Ross became aligned with Red Skull (under the alias of "Senator Dell Rusk") to further his obsession with capturing the Hulk. On the helicarrier, the Winter Soldier breached the base and injected Ross with a modified sample of the Hulk's blood, thus ultimately granting him the same powers. He then wreaks havoc on the base and brutally tortures the agents onboard to attract the Avengers. He then brawls with the Hulk before retreating under "Rusk's" orders. He and the Soldier then meet "Rusk" in his office along with Falcon and Doc Samson, who were both brainwashed.

During this time, an L.M.D. of Ross protected his identity while leading the Hulkbusters into finally capturing the Hulk.

Red Hulk then assists Skull as he released a biochemical called "Dust of Death" on Avengers Mansion and bystanders, which transformed the victims into horrifying versions of him. Red Hulk fought Thor at the Statue of Liberty, but the God of Thunder sent the Hulk copycat flying away. After the Avengers captured Skull, cured the infected and had Falcon and Samson treated while Soldier defected, Red Hulk escaped and wasn't seen for a while.

Captain America and Iron Man travel to a Hulkbuster Base after convincing the president to clear Hulk of the crimes committed by Red Hulk, forcing Ross' L.M.D. to release him. Unbeknownst to them, Ross' L.M.D. secretly placed a device on the back of his head to make him lose control. After being released, Ross makes him lose control and escape into the woods. Ross' L.M.D. then insults them on how they released a "deadly person". The real Ross, still as Red Hulk, eventually arrives to help them defeat the Hulk. He then joins them as an Avenger. Unknown to Red Hulk, Captain America and Wasp sneak into the Hulkbuster Base and learn what's happened to the Hulk. Wasp is able to remove it just as the Avengers arrive. As Hulk attacks Red Hulk, the latter drops a remote which exposes that he placed the device on him. Iron Man then reveals that he planted a device on Red Hulk's ID card, due to rightfully never trusting him in the first place. The device reverts him back into his human form and reveals his true identity and intention to label them all as terrorists, infuriating the Hulk. Captain is able to convince him to spare Ross' life. Just as Ross is sent to jail for his crimes against humanity, despite what has happened, he still thinks that Hulk is the true threat, unable to see that he was the real monster.

Ross is the absolute opposite of what a military general should be. After he is assigned to capture the Hulk, the mission becomes an obsession as he starts going rogue and resorts to any method to achieve his goal, slowly becoming the very thing he once hated. During his pursuit, he recklessly used any type of weapon at his disposal to take down the Hulk regardless of whomever he hurts in the process.

During the fight in Las Vegas, Ross fired a missile on the Hulk while two S.H.I.E.L.D. agents, displaying his disregard for casualties caught in his crossfire. He was the ultimate hypocrite as he then gained superpowers that made him a copy of the Hulk only red and he even willingly worked for the Red Skull, who represented everything that the U.S. military opposed.

Ross is arrogant and sadistic; as he tortured Maria Hill during the attack on the S.H.I.E.L.D. helicarrier and he fought the Hulk, feeling that he was more superior than the Avenger. When finally captured for his crimes, he continuously tried to justify his actions without even considering the fact that he was even more villainous than the Hulk ever could be.

Ross in his human form.

Ross' L.M.D. as he captures Banner to protect his own identity. 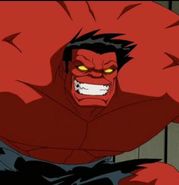 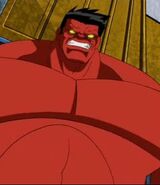 Red Hulk along with the Winter Soldier, Doc Samson and Falcon. 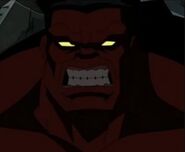 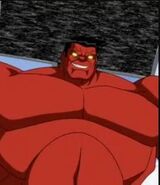 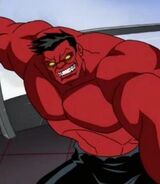 General Ross was arrested when he was revealed to be Red Hulk.