Same powers of their original selves

To separate everyone on Earth from their good selves.

The Red Justice League are a trio of evil versions of Batman, Superman, and Wonder Woman, coincidentally created by Lex Luthor in the show Justice League Action. They all made a one shot appearance in the episode, Superman Blue vs Superman Red.

After Lex Luthor steals a quantum battery from Star Labs, he attaches it to his Kryptonite radiation emitter ray, in hopes of defeating Superman. However, as he runs into Superman, Lex Luthor blasts him with his ray already. At first nothing happened, leaving Luthor shocked and confused. Then, Luthor witnesses Superman split into two colorful versions of himself: one red and the other blue. The red Superman was determined to stop Luthor and showed him no mercy at it, while the blue Superman tried to get along with him, but with no avail.

Lex Luthor escapes from the two Supermen but then crosses paths with Wonder Woman. Lex Luthor blasts her, resulting in the same effect with Superman. The red versions of the heroes overpowered their blue selves and defeated them, knocking out Lex Luthor in the process. They then took away his weapon and fled with it.

At an abandoned warehouse, Superman Red and Wonder Woman Red both hatch a plot to use the device to separate everyone on Earth into red versions of themselves. Just then, Batman and Green Arrow appeared. Red Superman and Wonder Woman managed to pin down Green Arrow and shot Batman with the ray, causing him to split in two, and the two selves started fighting each other. Superman Red was about to intervene until Wonder Woman Red told him to wait, as she said she wanted to see the two of them fight. As the two Batmen fought, the red Batman fools his blue counterpart into calling a truce only to knock him out. Wonder Woman Red advises Batman Red to shoot Green Arrow with the ray, but Batman Red tells her that she thinks too small as he plans to connect the ray to the watchtower, release it upon the Earth and use it on everyone.

At the Justice League watchtower, the Red Justice League imprisons Superman Blue and Wonder Woman Blue and connects the ray to the watchtower. They were about to unleash the ray upon the Earth, until they noticed Green Arrow and Batman Blue trying to sneak up on them after Batman Blue blew their cover. Green Arrow manages to take the ray away from them and tried to flee with it. However, Superman Red got a hold of him, accidently causing Green Arrow to fire the ray at Lex Luthor confined in a cell, splitting him in two as well. Superman Red was about to use the ray on Green Arrow, but Batman Red warned him not to, as he said that the ray was low on power. Red Lex Luthor knocks out his blue twin and offered his services to the red Justice League. Lex Luthor connects the ray to the watchtower's core, giving it unlimited power, and stated that it will split everyone on Earth into two. However, once he activated it, he targeted several rays at the red Justice League, reverting themselves back to normal.

Unlike their blue counterparts who are kind and optimistic, the Red Justice League are cruel and malevolent. However, not all red counterparts of a person are evil as red Lex Luthor was revealed to be good, unlike his blue counterpart who is actually evil. That is because the red selves are actually an aberration of a person, while the blue selves carry the person's true nature. 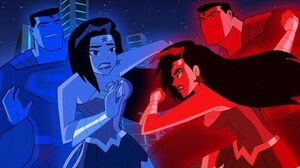 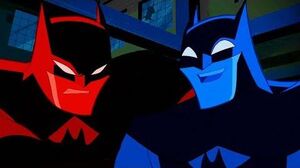 Retrieved from "https://villains.fandom.com/wiki/Red_Justice_League?oldid=4030907"
Community content is available under CC-BY-SA unless otherwise noted.