Use the Spikes to find people who are willing to serve him (succeeded).

Kill the Hulk and anyone else who stands in his way (failed).

The Red King is the main antagonist of Planet Hulk comic series and its movie adaptation. He was the deceptive and ruthless tyrant of the planet Sakaar until the arrival of the Hulk ended his despicable rule.

He was voiced by Mark Hildreth, who also voiced Quicksilver in Wolverine & the X-Men, Scowl in Transformers: Robots in Disguise and Davy Jones in the Pirates of the Caribbean: At World's End video game.

The Red King is a vicious, merciless and tyrannical warrior-king who forces others to fight in gladiator-style combat for his own amusement. He is a coward at heart as well as a sadist who enslaves his victims with advanced technology and forces them to slay their own brethren while pretending to be a powerful warrior for his people (in reality, he only fights when he knows he will win and even then with the aid of weapons vastly superior to those afforded to his slaves).

He was also responsible for unleashing the horrific plague known as Spikes upon his own people when he felt the need to do so, normally for his own selfish aims - in the process, he willingly massacred thousands of his own people, including countless women and children.

The Red King first appeared overseeing a gladiator combat following the capture of Hulk (who was exiled to space by the Illuminati). Being impressed by the Hulk's strength, the Red King dons his gladiator armor to fight the Hulk in sword combat. Though the Red King receives a slash on his face, he was saved by his close right-hand Caiera. Though the Red King was given a chance to kill the Hulk, he decides not to after seeing the audience jeer at this, though he secretly tells Caiera that he had no intention of letting the Hulk live.

The Red King then forces the Hulk and several captured rebels in another gladiatorial fight that involves giant robotic monsters, but the heroes defeated them all. Feeling that the Hulk's actions are making the people of Sakaar turn away from the Red King, Caiera paid a visit to the Hulk in his cell, revealing that she came from a village that was ravaged by a swarm of Spikes that killed her family as a teenager, and that the Red King (who was a young prince at that time) came up with several droids to exterminate the Spikes and their infestations, which left Caiera to give her loyalty to him as his right-hand.

The next day, the Red King forces the Hulk and the rebels fight against Beta Ray Bill, but when they refuse to kill Bill after defeating him, the Red King decides to punish them by death. However, being freed from the Red King's control during the fight, Bill stops the execution and destroys all the mind-reading discs controlling all those around the arena, allowing the Hulk and the rebels to escape free before disappearing back to his homeworld. The Hulk then warns the Red King never to go after him, or he will pay the price for it.

Rather than obliging to this, the Red King instead orders for a manhunt against the Hulk and sends Caiera to personally lead the hunt herself. As the Hulk and the rebels take refuge inside a village, Caiera spots the Hulk and engages into a fight against him. However, the stakes are raised when another swarm of Spikes hit the village infecting most of the people (including the Hulk), much to Caiera's shock. Through a spy drone, the Red King contacts Caiera as she evades the epidemic, but reveals a shocking truth: he was the one who created the Spikes as a means of finding those who would be willing to serve for him, and that he was the one who ordered the hit on her village in the first place. Realizing that the Red King was the one who killed her family and people, Caiera angrily severs her loyalty to the Red King, but he threatens to let her end up like the other unless she leaves.

After a lengthy battle, the Hulk manages to destroy the Red King's armor, and the Red King cowardly begs for his life. Rather than killing the Red King, the Hulk instead turns him over to Caiera, who injects a Spike into the Red King's hand, mutating him. As he gravels around the palace in pain while being mutated, he is confronted by his drones. He orders them to kill the rebels, but they detected the infestation per their programming. Without hesitation, the drones set their flamethrowers to exterminate the infestation, killing the Red King for good and allowing the Hulk to take over as the new King of Sakaar with Caiera as his Queen. 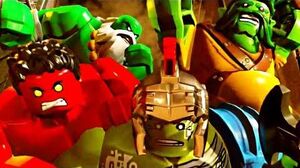