Soldier
Right-hand to Don Paragon
Leader of the Dandy Lions

Usurp leadership of the Dandy Lions.

Red Manuel is a major antagonist of the Rooster Teeth animated web series Nomad of Nowhere. He is a bounty hunter, member of the Dandy Lions under Toth, and loyal soldier to Don Paragon.

He is voiced by Alejandro Saab.

In the episode "The Dreaded Nomad", Red Manuel, the Dandy Lions, and Skout set out under the orders of Don Paragon to find and capture or kill the dreaded magic Nomad, who is feared for his magical powers. They had tracked him to several areas before, but now tracked him to a thorny wood. Red Manuel believes Toth has led them to failure again, and expresses his desire to replace Toth as leader of the Dandy Lions (something Toth states he has done many times before). When the two butt heads, Skout tries to break them up, only for Re Manuel to mock her and push her over. However, Toth stands up for her and throws Skout's bag on him, proving she is stronger than him since she can carry the weight. In the woods, Red Manuel mocks Skout for researching the local flora, then proceeds to pick one despite the fact it is poisonous, causing his hand to swell and him to storm off.

Skout becomes separated from the others and meets the Nomad, only to find he is not evil or deadly at all, but instead a friendly magic man. However, Toth and the Dandy Lions find the Nomad and demand he come with them. To avoid capture, the Nomad uses magic to bring their supply of knives and weapons to life, distracting them. Red Manuel steps forward to fight the knives, but they run and the Nomad entangles him in a sheet. When the Dandy Lions come to help, he refuses them and slaps them, causing one to drop a torch, setting the sheet on fire. He runs around catching the area on fire and even bumping into Toth before Skout puts him out. He yells at Toth for letting the Nomad get away, but she just punches him to the ground. Toth sets the woods on fire, causing her and the dandy Lions to pass out from smoke inhalation. However, the Nomad saves them. Upon waking up, Red Manuel aims his gun at the Nomad and tries to kill him, only for one of the Nomad's magical rock friends to knock him out with a broom handle, allowing the Nomad to flee.

In "Bliss Hill", he is with the Dandy Lions as they report back to Don Paragon, defaming Toth for her failure. He then suggests Don put out a larger bounty for the Nomad, to which he agrees.

In "El Rey", Skout is injured during the hunt and Toth has the Dandy Lions return to the Oasis to provide her with treatment, to the displeasure of Don Paragon. Don expresses his desire to turn the Nomad into El Rey and become a governor of Nowhere. When a Dandy Lion questions this, Don murders him. Red Manuel, however, does not even react to the gruesome killing of his teammate and instead tires to mock Toth, but she shuts him down and storms away.

In "Eagle Canyon", Don Paragon is stressed over a surprise visit from the governor Toro. When Santi offers up Jethro as a masseuse, Paragon is intrigued. Red Manuel tries to shift the attention onto him by saying that he has good hands, but is shut down by Don. Later, in Eagle Canyon, Red Manuel shoots a giant bird with a harpoon to get her egg and cook it. When the Nomad goes to save the egg, Red Manuel decides not to inform Toth of the Nomad and go after him himself. He tries to shoot the Nomad with a bow, but is attacked by the mother bird and chased away.

In "End of the Line", the Dandy Lions continue their search and do not stop for days. When Jethro, Santi, and Null complain, Red Manuel gloats that if he were in charge, he'd let them rest. The Dandy Lions then finally call him out on the fact that he only ever talks about himself, but he simply claims that if he were in charge, he could change the subject. They then see Toro's Champion riding through the desert, also looking for the Nomad. Toth urges the Dandy Lions to press on so they can achieve their goal before he does. However, they are unaware that Red Manuel is not with them.

In "Compass", it is revealed that Red Manuel deviated from the Dandy Lions and followed the Champion instead, following him as he tracked down Skout and the Nomad, who were now working together. After Skout defeats the Champion, Red Manuel reveals himself, telling Skout that he was finally turning against Toth to take the Nomad to Don Paragon himself. Skout tries to tell him that the Nomad is not a villain, and that she was no longer loyal to the Dandy Lions or Don Paragon anymore. Red Manuel feigns sympathy before laughing, telling them that he was going to make up a story about her betraying Paragon so he could kill her and take the Nomad anyway, but she surprised him by actually doing it. He then shoots the Nomad and captures both it and Skout.

In "The Red Carpet", Red Manuel has gotten the credit he deserves and is appointed the new leader of the dandy Lions, though he receives none of the respect he thinks is rightfully his. Don Paragon holds a party to celebrate the Nomad's capture, but Red Manuel thinks the party is celebrating him until Paragon pushes him aside.

In "Fiesta", the Nomad confronts Paragon. Sensing danger, Red Manuel flees. Paragon lights the town on fire to stop the Nomad, and an escaped Skout plans to break the Oasis' dam to save the town. Red Manuel overhears and follows her to the canon and confronts her, but reveals to her that, even as Captain of the Dandy Lions, he still does not get any respect. He tells Skout that his own mother did not care about his new position, and his wife laughs when Paragon abuses him. Skout tells him that he acts like a jerk, making Red Manuel lower his gun and reflect. Skout fires a cannonball attached to a rope, which tangles around Red Manuel's leg and sends him flying into a wall. He survives, but is then punched down by a vengeful Toth. It is unknown if he survived.

Red Manuel is arrogant, egotistical and selfish. He cares mainly for himself and shows excessive pride. However, he is also dimwitted and often takes both his allies, enemies, and environments for granted, or makes things needlessly complicated instead of going to an obvious solution. He talks down to those around him, especially Skout, and mocks any method of living that is different from his. Despite this, he can be wrathful and violent, though he usually does not get far with his attacks. 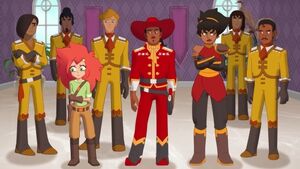 Red Manuel with Toth, Skout, and the Dandy Lions. 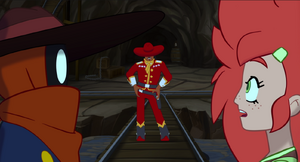 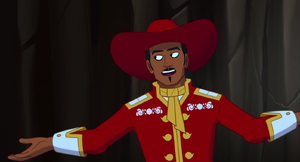 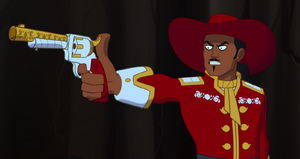 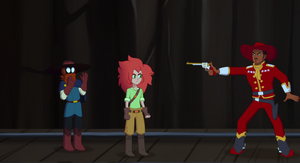 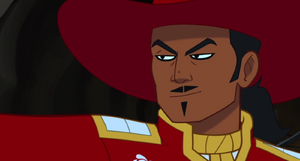 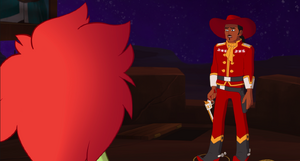 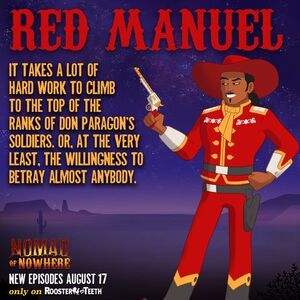 Red Manuel's bio picture.
Add a photo to this gallery

Retrieved from "https://villains.fandom.com/wiki/Red_Manuel?oldid=3891499"
Community content is available under CC-BY-SA unless otherwise noted.