For her animated counterpart from 1951, see: Queen of Hearts (Disney).

Maintaining herself in power.
Resting her feet on every pig's belly.

Kill Alice, the White Queen, and anyone else who helped her.

Maintain her complete control over Underland (both failed; formerly).
Make the White Queen tell her the truth about her childhood misdeed (succeeded).

Iracebeth of Crims (also known as The Bloody Big Head), or more commonly known as The Red Queen, is the main antagonist of the 2010 film Alice in Wonderland and its 2016 sequel Alice Through the Looking Glass. She is based upon the character of the same name and Queen of Hearts from the classic novel Alice's Adventures in Wonderland and its sequels.

The Red Queen is an impatient, oppressive, narcissistic, jealous, envious, and petulant-tempered empress who treats her subjects unfairly and simply orders anyone to execution by decapitation when she always shouts her favorite words "Off with their (his or her) heads!". However, after her redemption and her change of heart in the second film, she becomes intelligent, altruistic, and simplistic.

As the plot of "Through the Looking-Glass" plays out within a living game of chess, the Red Queen could be viewed as an antagonist as she is the queen for the side opposing Alice.

Despite this, their initial encounter is a cordial one, with the Red Queen explaining the rules of chess concerning promotion — specifically that Alice is able to become a queen by starting out as a pawn and reaching the eighth square at the opposite end of the board. As a queen in the game of chess, the Red Queen is able to move swiftly and effortlessly.

When that celebration goes awry, Alice turns upon the Red Queen, whom she "considers as the cause of all the mischief", and shakes her until the queen morphs into Alice's pet kitten. In doing this, Alice presents an end game, awakening from the dream world of the looking glass, by both realizing her hallucination and symbolically "taking" the Red Queen in order to checkmate the Red King.

Ever since Alice Kingsleigh left Underland, the Red Queen had overthrown her sister, the White Queen, and took control of Underland on Horunvendush Day. Her right-hand man is the Knave of Hearts. She resides in her palace called Crims within the port city of Salazen Grum. She has an army of Armoured Cards, Frog Servants, Monkey Servants and a very bad temper, and is jealous of her sister the white queen

After Alice's escape from her Salazen Grum. She slaps Stayne and he convinces that the Hatter and the Dormouse let Alice escape and takes the Vorpal Sword. In the morning, the execution of the Hatter and the Dormouse begins, When the Executioner wields an axe at the Hatter, his body disappears and the hat floats to the Red Queen and the Cheshire Cat appears he was the Hatter for a whole time during the execution, after the disgrace of her subjects as liars, cheats, and falcifires, she yells off with their heads but the Hatter yells to all people and animals to stand up and fight and rise up against the Bloody Red Queen, they all yelled "Down with the bloody big head!". Furious, the Queen summons the Jubjub Bird to attack all of the Underland people and animals.

On Frabjous Day, the Red Queen and her sister White Queen sent their champions forth to do battle, she summons the Jabberwocky, after the war of the Red and White Armies and the Jabberwocky got beheaded by Alice, When She yells to kill Alice, the Red Card Soldier stands up to her. "We follow you no more, Bloody Bighead!" she yells off with his head one last time, but all her army rises against her and her crown floats away to Mirana sent by the Cheshire Cat. As the New Queen of Underland, Mirana orders Iracebeth of Crims to be expelled to the Outlands and as for the Knave, he joins Iracebeth in banishment until the end of Underland, Stayne barely stabs her with his dagger but the pin slings his hand by the Hatter and drops his dagger, Iracebeth screams that Stayne tried to kill her as they are taken to the Outlands.

She returns in the 2016 sequel Alice Through the Looking Glass, here she is the main antagonist turned into a major character (her boyfriend is now Time). She now lives in the Red Castle within the Outlands during her exiled as her former castle in the abandoned kingdom of Salazen Grum lay in ruins.

In present the Red Queen reunites with a dying Time who tell to her who he fails and Alice is going to save Tarrant's family, the Red Queen betrays Time and leaves him making him throws away by her guards.

The Red Queen captured Alice and Tarrant who are saved by Tarrant's family. The two are prisoned into a cage by the Red Queen together with the others. The Red Queen takes the cronosphere and back to the past taking the White Queen with her.

The White Queen apologizes to the Red Queen and the two being two lovely sisters, so she turns better due to being loved by everyone. Finally, she then realizes the meaning of family and hope.

While never given a proper name, the Red Queen appeared as a chess piece in Donald in Mathmagic Land. Here, she wonders whatever Donald Duck is an Alice or a lost pawn. After her husband confirms that it is a lost pawn, she orders the red chess pieces to stop Donald. Luckily, he got away before the Queen did something bad.

It was seen during the demonstration on the chess game, she was kicked by the White King. 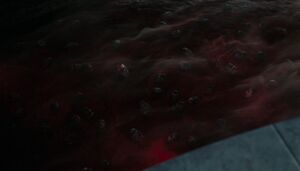 Admist the bloody Crimson Sea within Salazen Grum lies the head of the Queen's former husband, the Red King. 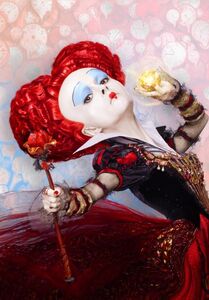 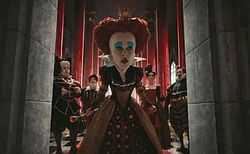 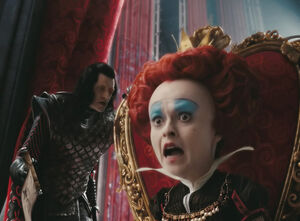 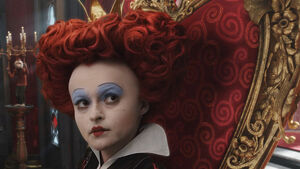 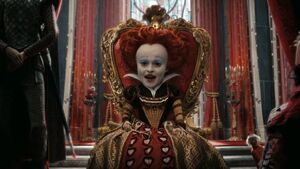 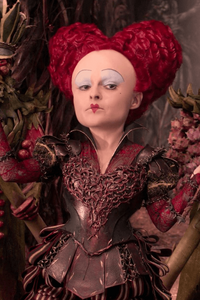 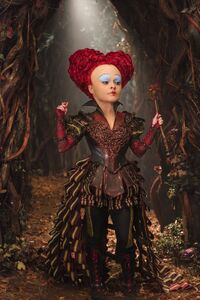 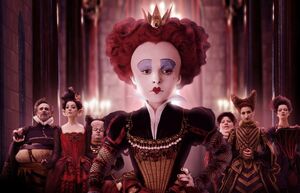