Once Upon A Time In Wonderland

Bend the Laws of Magic so she can go back in time and never leave her true love. (formerly)

Anastasia, also known as The Red Queen, is a major antagonist of the ABC show Once Upon a Time In Wonderland. She is the tyrannical ruler of Wonderland and a former ally to Jafar.

Anastasia takes the place of the Red Queen from Lewis Carroll's novel Through the Looking- Glass, and What Alice Found There as well as the White Queen. She also represents a version of Cinderella's wicked stepsister Anastasia Tremaine.

She was portrayed by the starring cast member Emma Rigby.

A beautiful and elegant woman, Anastasia's personality and moral conduct are not as pleasing as her alluring appearance. Driven by a lust for power, the Red Queen has plans for Alice's return to Wonderland, where she reigns supreme and forces all the creatures to abide her will. Anastasia's ambitions are driven more towards true love, the love she has for Will Scarlet and hopes to regain that with him.

Having been taught magic by the Queen of Hearts, the Red Queen learned how to channel and ignite flames, controlling fire. Anastasia has extensive magical abilities but her preferred choice is telekinesis; throwing objects and people around, restraining Alice from trying to hit her and stealing the fairy dust from her hand. She could also knock people out easily with magic. Anastasia could cast a locator spell on footprints to follow the genie. She could also used the same type of beheading magic as the Queen of Hearts used, cutting off her servant's head with him still being alive. She also proved to be able to partially command the Wonderland's vegetation at enormous distances, as well as being able to perceive (along with Jafar) the death of the Bandersnatch. Anastasia could conjure weapons forward by transforming an ordinary stick into a sword.

Although it has not been confirmed, is strongly implicit, if not quite obvious, that the Red Queen has used her powers to cast a curse on Grendel, to permanently disfigure his appearance (as punishment for having been robbed her).

She was shown to have some sword fighting skills when she battled the Jabberwocky. 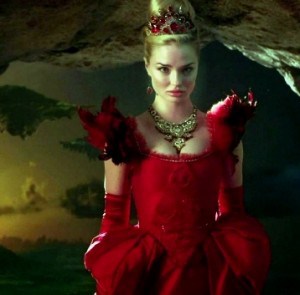 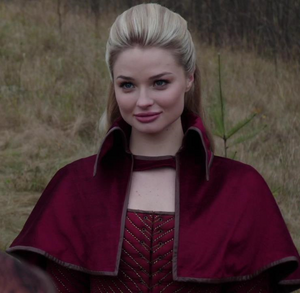 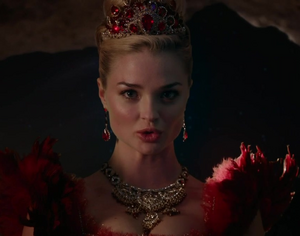 Retrieved from "https://villains.fandom.com/wiki/Red_Queen_(Once_Upon_a_Time)?oldid=3764283"
Community content is available under CC-BY-SA unless otherwise noted.