Supercomputer created by the Umbrella Corporation

Its third objective is unknown because Albert Wesker destroyed the computer screen before it was revealed.

The Red Queen appeared as one of the two main antagonists of the 2002 movie Resident Evil, the main antagonist its 2012 sequel Resident Evil: Retribution and the anti-hero/supporting protagonist of Resident Evil: The Final Chapter. Its holographic avatar was modeled after Alicia Marcus, daughter of Dr. James Marcus, the original founder of the Umbrella Corporation.

It was originally integrated into the Arklay Laboratory but was moved away by Sergei Vladimir during the t-Virus outbreak in 1998. Albert Wesker first met the Red Queen in that same year. While trying to retrieve Umbrella's information through a computer, the Red Queen cut off his access and introduced herself. This caused Wesker to destroy the computer's monitor in a moment of anger and to vow take revenge on the Red Queen.

It was last seen by Wesker in the Russian Facility, where he managed to save the entire Umbrella history into a single Red Queen integrated disk. He then erased the computer's memory, finally claiming his revenge on it.

Besides The Hive, the Red Queen's system also expanded through the Mansion. During the t-Virus outbreak, her primary defenses were activated, locking everyone inside to prevent the virus from escaping. She proceeded to flood the laboratories, stop the elevators, and killed everyone inside with Halon gas. Outside of the Hive, a nerve gas was released, rendering security operatives, Alice and Spence Parks unconscious and without memory of prior events.

When a commando team sent by Umbrella arrived at the Hive to investigate the loss of communication from the workers there, several team members were killed in the Queen's chambers after her self defense systems went "online". When Alice and Chad Kaplan entered the chamber, they disabled her main circuit breakers in order to prevent her from rebooting. Before she is shut down, the Queen declares that they would die because of their interference.

When mysterious monsters began to emerge in the compound, the mission became a fight for survival. Under the threat of being disabled completely, the Red Queen is forced to show the team a way out of the Hive.

The Red Queen wasn't heard from again until Alice, Matt Addison, and Rain Ocampo were the only remaining survivors, trapped in a locked laboratory. She explains that if they wanted to escape the Hive before lockdown (or the licker reaches them), she would require the life of the second to the last surviving Umbrella Commando, Rain, as she was infected with the virus.

Alice pleaded with the computer to let them all out, due to the discovery of the Anti-Virus on the train, but the Queen replied negatively, saying "it's a risk I cannot take.". When Alice refused to comply with the Queen's request, she then demanded Alice kill Rain. Even though Rain pleaded Alice multiple times to do it, Alice refused, and instead smashed the computer screen with an axe to silence her. To their surprise, the computer was suddenly disabled by Chad Kaplan, who was thought to be dead, shutting her down for good.

The Red Queen later mentioned by her "sister" unit, the White Queen in events of Resident Evil: Extinction. When Alice infiltrates the underground Nevada Base, the White Queen tries to explain her nature and reasons of her actions in the events of the first film, but Alice interrupts and mentions her "sister", describing the Red Queen as a "homicidal bitch". The White Queen then tries to justify the Red Queen's actions, stating she followed the "logical" path of action to prevent the spread of infection. True enough; if anyone infected with the T-Virus was allowed out, even alive, they would have come back as a zombie or mutate into some kind of monstrosity.

Albert Wesker is thought, and shown, to be in complete control over all situations concerning Umbrella and the bid to experiment on humankind as a means to perfect the T-Virus; once the virus is perfected what remained of humanity could live on the surface again without fear of the undead or the other mutations. Or possibly, to help revive the Earth's ecosystems, which were destroyed by the T-Virus epidemic and left the world a wasteland.

The time of her reactivation is left to speculation, but it would appear she had been around some time prior to Alice's takeover of Arcadia as an army of Umbrella soldiers led by a brainwashed Jill Valentine arrived at the ship only moments after Wesker was once more bested by Alice.

The Red Queen now operates primarily out of the Umbrella Prime facility, a former Soviet submarine base. During the events of the film, she runs test simulations in the recreated cities of Raccoon, Moscow, New York, Berlin, Tokyo and others to monitor the spread of the t-Virus; she uses clones of 50 different models (which include Alice and three of her friends) to populate the recreations and for Umbrella troops, giving appropriate memories for each situation. The Red Queen has a new appearance and vocals, with her coloring a more solid shade of red to give a menacing appearance. Every time she appears, the Red Queen is scowling. She has a dry sense of humor, as she repeats her warning from the Hive, and seems angered when she orders Alice's execution. She also controls Jill Valentine through her scarab device, giving orders directly to her mind.

The Red Queen monitors Alice when she awakens and has Jill interrogate her; however, Alice refuses to answer the question - "Why did Alice turn on Umbrella?" as well as - "Who do you work for?". The Red Queen uses a white noise machine to hurt Alice's ears upon refusal to answer the question to weaken her will, and thus make her talkative. However, Wesker shuts her down and takes control of the facility, and allowing Alice to escape in an Umbrella combat suit. Once rebooted, the Red Queen forces Alice into the Tokyo simulation, which she activates, accidentally leading to zombies infesting the corridor to the control room; she also sends Jill and Umbrella soldiers to investigate how Alice escaped, thinking there may be a flaw in the cell's lock.

The Red Queen then spends time tracking the source of a rogue signal, which was being used by Wesker to hack into Umbrella Prime. Right after Wesker gives vital information on how to escape to Alice and Ada Wong, the Red Queen succeeds in finding and disabling his signal, appearing on the monitor in his place. She announces that she's in charge of Umbrella Corporation now, and not to listen to Wesker; she demands Alice and Ada stay put as Jill's team is right outside the control room. However, Ada runs into another corridor, calling for Alice. Perhaps purposely down to create a sense of deja vu, the Red Queen tells Alice "you're all going to die down here", to which Alice retorts that she's "heard that one before."

Detecting intruders (Wesker's extraction team) using the surface elevator, the Red Queen sends Umbrella troops to terminate them, but it proves to be an unsuccessful effort as they easily take out all the guards in the submarine pens. She marks them for termination, but fails to detect the explosives they placed at the in-take fans; their detonation is less than 2 hours, any longer would ensure Umbrella reinforcements. When Alice and Ada enter the New York simulation, the Red Queen sends in two bio-weapons (Axemen), hoping to kill Ada for her betrayal and wound Alice enough to prevent the escape of a key research subject. However, after both of the monsters are dispatched by an exploding car, she gives up on sending zombies to attack Alice, as their lack of intellect made them sitting ducks, deciding to send Jill and Umbrella troops instead. At the same time, the Red Queen decides she needs to focus on quantity over quality to deal with the intruders; she activates the Las Plagas undead in the Moscow simulation, arming them with weapons and vehicles.

When Jill confronts Alice, Ada and a clone named Becky in Suburbia, the Red Queen orders Alice be captured, if possible, and terminated if necessary. Though Alice escapes with the clone, Ada Wong is successfully captured; she would prove to be a useful bargaining chip to get Alice back, since her compassion would prove to be a weakness. From then, the Red Queen decides to take a "wait and see" approach, watching Alice's group approach the Submarine Pens to escape on the elevator. Detecting an Uber-Licker outside the Moscow simulation, the Red Queen accessed the power grid to allow it to reach the elevator. It captures Becky, while Umbrella troops keep Alice's allies occupied. The Red Queen takes no further action after this, confident that the Uber-Licker will damage Alice to the point of being immobile while Jill's forces kill the intruders.

Presumably, the Red Queen can transfer her programming to any available Umbrella facility, given Wesker spoke of her in the present tense. Wesker later states the Red Queen intends to wipe out all of humanity using the bio weapons created by Umbrella and that it is up to Alice and the others to stop her once and for all. This implies that any sanity the Red Queen had is long gone. Little did he knew that in spite of her seemingly malevolent actions, Red Queen had an agenda of her own which proved that she actually had better redeeming qualities more than Umbrella.

Upon seeing that the time was right, Red Queen contacted Alice soon after Wesker betrayed her allies. Alice was expecting the A.I. to gloat her over her loss, but to her surprise, the A.I. instead proposed an uneasy alliance to her in condition where she must return to The Hive.

When a vial of the t-Virus was discovered shattered in the laboratory, The Red Queen showed no remorse in her actions as she killed all of the employees. She was willing to prevent the spread of the virus at all costs, even if there was the smallest chance of curing the infection (the anti-virus had a 50% chance of successfully curing the infection, depending on how much time has passed).

It should be noted that she was overzealous in some of her actions and completely passive in other instances, which indirectly and directly led to the Umbrella Special Commando Squad investigation. After the t-Virus was reported leaked, a safe option would have been to warn the researchers, who would cultivate the Anti-virus and save everyone. Instead, she proceeded to exterminate the researchers.

Another failure she made was not reporting the leak to Umbrella. Had she reported that the virus had escaped and she had to kill the Hives population, Umbrella may not have sent in the research team to investigate in the first place. These failures she made allowed the virus to continue to spread, resulting in the infestation and later destruction of Raccoon City and the Global T-Virus outbreak which infected the majority of life itself.

In The Final Chapter, another flaw in the Red Queen's programing is revealed: she is programed to follow all Umbrella orders, but also to protect human lives. Doctor Alexander Isaacs plot to wipe out humanity through the Global T-Virus pandemic causes these two directives to conflict and the Red Queen to ultimately not be loyal to Umbrella. Her directives restrict her ability to act directly against Umbrella while Doctor Isaacs is alive. Once Isaacs dies, the Red Queen seems to gain full autonomy as she is able to reactivate herself and order Umbrella forces to desist. 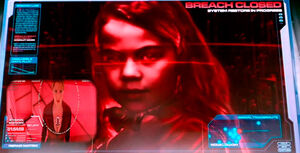 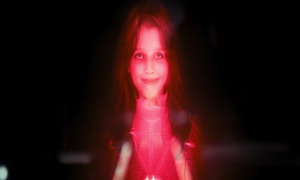 The Red Queen comes online in Resident Evil: The Final Chapter.
Add a photo to this gallery

Retrieved from "https://villains.fandom.com/wiki/Red_Queen_(Resident_Evil)?oldid=3772140"
Community content is available under CC-BY-SA unless otherwise noted.