The Secret of the Unicorn

Kill Sir Francis Haddock and steal the treasure of the Unicorn (failed).

Red Rackham is the posthumous overarching antagonist of The Adventures of Tintin: The Secret of the Unicorn and its 2011 film adaptation.

He was a pirate known as the archnemesis of Sir Francis Haddock, the ancestor of Captain Archibald Haddock. He also happens to be the ancestor of the Ivan Ivanovitch Sakharine.

He was voiced by Daniel Craig in motion capture, who also played Connor Rooney in The Road to Perdition.

Rackham had engaged Sir Francis Haddock in battle, resulting in almost total destruction of Rackham's ship. As his ship was sinking, Rackham and his men boarded The Unicorn and managed to gain control of the vessel after killing the remaining crew of The Unicorn.

Haddock was captured and tied to the ship's mast and the crew were cast overboard and eaten by sharks. Rackham intended to have Haddock tortured by his men the following day, but before he could, Sir Francis freed himself and plotted to sink the ship with the pirates still aboard. During this, Rackham discovered he had escaped leading to the two engaging in single combat using cutlasses. Rackham was defeated and Sir Francis managed to blow up the Unicorn and get away safely with several of the treasure in hand.

Rackham then perished with his pirates as the Unicron sinks to the bottom of the ocean, but not before cursing the Haddock family name and vowing to Francis that they will meet again in another time and life. Needless to say, Red Rackham's vow came true when Sakharine vows to steal Sir Francis' treasure and kill Captain Haddock.

To that end, Sakharine turned Haddock's crew against their captain, but they end up being defeated and arrested. 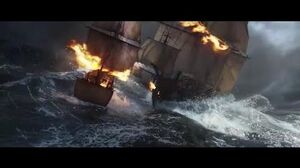 Adventure of Tintin - Battle in the Sea - Part 1 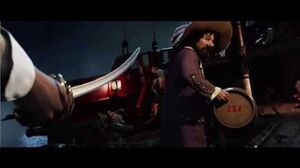 Adventure of Tintin - Battle in the Sea - Part 2 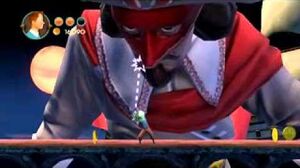 THE ADVENTURES OF TINTIN last misson of CO-OP mode.. (download link included in the description)