Post-collapse of the Red Ribbon Army

Ability to fight on indefinitely

The Red Ribbon Androids are a group of androids and cyborgs created by Dr. Gero and the Red Ribbon Army. Their goal is to get revenge on Goku for the army's destruction. They serve as the main antagonists of the Android Saga. This group consists of about 10 members.

Dr. Gero's method of converting a human into an android halts their aging and makes them immune to natural death, effectively making them immortal.

After the destruction of the Red Ribbon Army, their head scientist, Dr. Gero escaped from Goku before he would be spotted and killed when Goku has the chance. Dr. Gero goes into hiding and used a remote control tracking device to study Goku and the Z-Fighters strength and abilities to create powerful androids for one purpose to kill Goku and the Z-Fighters and dominate the Earth. But doesn't need more information from Goku's fight at Planet Namek meaning doesn't have the knowledge of Super Saiyans.

The first androids built by Dr. Gero were Androids 1-7. These androids were completely artificial. However, Gero was unable to control them because of their personalities so he scrapped them. He also destroyed Androids 9-12 for the same reason.

Dr. Gero later developed three more Androids: 13, 14 and 15. However, they all suffered from problems as well and thus, Dr. Gero never used them. However, after his death, Gero's supercomputer was able to complete them and sent them to kill Goku. They ultimately failed in their mission and were destroyed by Goku and his friends.

Dr. Gero later created an android modeled after his dead son, a high-ranking Red Ribbon soldier who was shot by an enemy bullet. This android was dubbed Android 16 and appears to be the largest creations. Gero made him powerful and programmed him to kill Goku, but also gave him a gentle personality to prevent him from being destroyed in battle.

Dr. Gero also abducted two runaways and experimented on them until they became Android 17 and Android 18. However, they were kept in stasis due to their rebellious nature. Eventually, they were released by Gero after Android 19 was destroyed.

The first successful Android developed by Dr. Gero was Android 19, an android capable of absorbing energy from people. It was modeled after a doll Dr. Gero once brought home. Gero later built an android body for himself and had 19 place his brain in it. Android 19 ended up being destroyed in their first confrontation with the Z Fighters, causing Dr. Gero to release Android 17 and Android 18. Their first act upon being released was to destroy Gero before freeing Android 16 from stasis and attacking the Z Fighters.

While Androids 17 and 18 were incredibly powerful, Dr. Gero's ultimate creation was Cell, a bio-android created from a combination of cells extracted from the world's most powerful fighters, including Goku, Vegeta, Piccolo and even Frieza and King Cold. Cell's goal is to absorb Android 17 and Android 18 in order to reach his perfect form. While the Cell in the main timeline was destroyed by the Z Fighters before it could reach its completion, another Cell arrived from a future where Android 17 and Android 18 are already dead. Cell successfully assimilated the two androids and achieved his perfect form. However, Cell coughed out Android 18 when Gohan who transformed into a Super Saiyan 2 and lost his perfect form. After Cell exploded, he regenerated and achieved his perfect form once but gained new cells and power. But was ultimately killed by Gohan.

In Dragon Ball Fighter Z Android 21 who was the mother of Dr. Gero's son whom 16 was based on and implied to be Gero's spouse served as the main antagonist reviving Android 16 and Cell also creating clones of Goku, his allies, and the villains he fought. 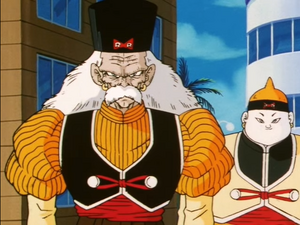 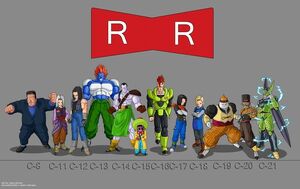 Retrieved from "https://villains.fandom.com/wiki/Red_Ribbon_Androids?oldid=3419042"
Community content is available under CC-BY-SA unless otherwise noted.