The Red Ribbon Army is a paramilitary criminal organization in the Dragon Ball animated series, bent on conquering the world. Its main goal is to find and collect the seven Dragon Balls in order to achieve world domination. In result of searching for the Dragon Balls they send a wave of fear and destruction throughout the world. The army was controlled by a short man called Commander Red. Red said to everyone that he wanted the Dragon Balls to conquer the world, but in truth he had another goal in mind. 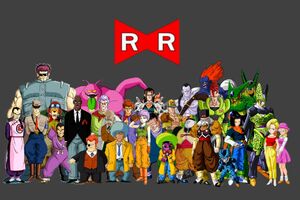