This article is about the version of Red Skull that appears in the 1990 Captain America film. For the mainstream version, click here.

Defeat and eliminate Captain America and rule over the entire world (failed).

The Red Skull (real name: Tadzio de Santis) is the main antagonist of the 1990 superhero film Captain America. He is an Italian Fascist.

He was portrayed by Scott Paulin.

Tadzio de Santis was an Italian boy genius, born in the town of Porto Venere. Because of his intellect, he was kidnapped from his family by the Italian army stormtroopers in 1936, in a raid lead by Mussolini in person. The boy was forced to watch as his parents were killed before him, then he was taken in Fortezza Lorenzo (Lawrence's Fortress), a secret base of nazi-fascist experiments. In here, he was used as a Guinea pig for an experiment aimed to create the first and only "übermensch", following the researches of the unwilling scientist Maria Vaselli, who escaped immediately after the beginning of the experiment.

7 years later, De Santis, brainwashed, with his memory erased, completely loyal to the Axis and with his face disfigured, was put in charge of a plan to destroy the White House with a missile. During his mission, the man now known as the Red Skull faced for the first time Captain America, his American counterpart. During the fight, the Skull utterly overpowered Rogers, and tied him up to the missile. Just a moment before the missile took flight, anyway, Captain America grabbed Red Skull's right hand, trying to bring him to die with him, but the Skull cut his hand off, surviving the encounter.

Due to Vaselli's formula, De Santis survived during the decades: he transformed the Fortezza Lorenzo in his own base and went through plastic surgery to reconstruct his ruined face. After building a secret criminal organization, the Skull gained a lot of power, and he was the mastermind behind the deaths of John Fitzgerald Kennedy and his brother Robert, and of Martin Luther King. When in 1989 the new American President, Thomas Kimball, began a new politics for global peace and echology, the Skull decided to stop him, but in order to avoid creating another martyr, he resolved to perform a revolurionary brain transplant, in order to become he himself the new US President.

Meanwhile, the believed dead Captain America awakens from his ice tomb in Alaska, and De Santis sends his daughter, Valentina, to kill him before he comes looking for him. While Valentina is searching for Rogers, Red Skull manages to kidnap the President when he's in Rome for a world summit, thanks to a general who betrayed US Government and is working for him. Disappointed for his daughter's failure, De Santis prepares to take possess of the Kimball's body, but the process is longer than forseen.

Kimball manages to break free from his prison, but he's immediately recaptured by the Skull. In his effort to ruin De Santis' plans, Kimball tries to jump from the top of the Fortress, only to be rescued by Captain America, arrived on the place. The Red Skull has the possibility to face his nemesis once again, and even this time he seemes to prevail on the American. Thanks to the help of both the President and Sharon Cooperman, anyway, Cap manages to have the Red Skull flee. De Santis has got one last resource, a hidden nuclear bomb powerful enough to destroy the southern part of Europe, and starts a detonator. In a final effort to make him regain his personality, Rogers forces him to listen to the registration of Tadzio's last night with his family, but the only result is to have the Skull become depressed, and more than ready to commit suicide. Taking advantage of a moment of distraction, Captain America throws his shield to the Skull, making him fly over the parapet, meeting his end on the cliff downward. 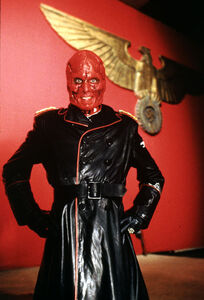 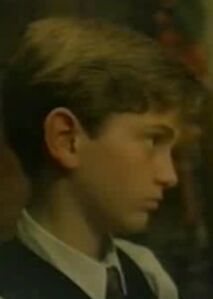 Tadzio De Santis as a boy. 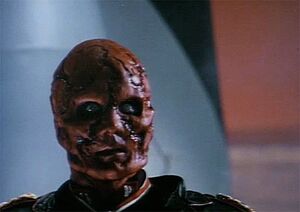 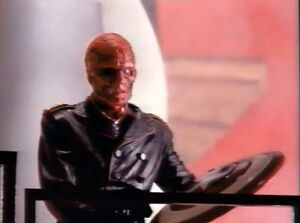 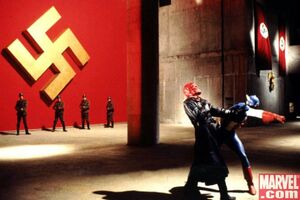 Red Skull and Captain America in their first battle. 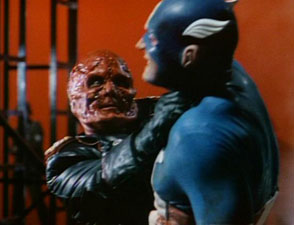 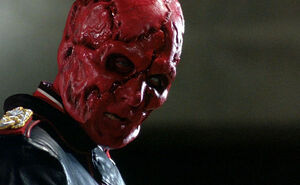 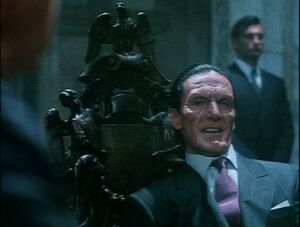 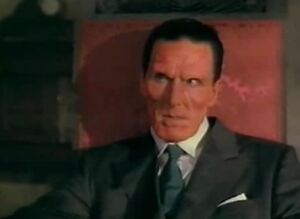 Red Skull finds out about his daughter failed to capture Captain America. 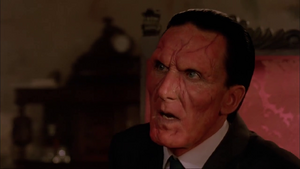 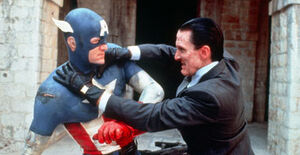 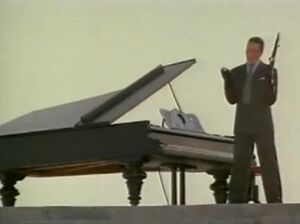 Red Skull setting off the bomb.