Tragic Terrorist
In the Ultimate Marvel universe, the Red Skull is depicted as being much as the same as his 616 counterpart, being guilty of terrible atrocities and depraved crimes, but is also different from his mainstream version in some ways, not the least of which is him being Captain America's son.

The Red Skull in this continuity was conceived from an affair between Captain America and his then-girlfriend. Following Captain America's apparent demise, the US Government learned of the illegitimate child and not wanting to compromise Captain America's heroic image, offered to take the child off of Gail's hands, to which she reluctantly agreed. The US Government hoped to turn the child into a second Captain America, but the psychopathic child had different ideas and once he came of age mercilessly slaughtered the entire military base's personnel and then gave himself his trademark "Red Skull". To further drive home that he was not following anyone's orders, Red Skull murdered John F. Kennedy.

Over the following years the Red Skull established himself as a completely merciless, sadistic, and psychotic monster who would commit all manner of evil acts for either fun or profit. The worst of them all was his murdering an innocent baby after forcing the mother to kill her husband with a pair of scissors. He and his men then tortured and gang raped the woman, who would go on to become the Avenger Red Wasp.

After a while Red Skull began to become less and less active, but then resurfaced upon learning of the existence of a powerful device known as the Cosmic Cube. Desiring it for himself, Red Skull threw his lot in with AIM, the terrorists creating the cube and no sooner did he acquire it (finished earlier than expected due to AIM's being "over-achievers") did he force the members of AIM to eat each other with his newfound power.  When the Avengers confronted him he took perverse joy in toying with them using his newfound power, until at last Captain America was able to stop him by impaling him upon a plane. Hospitalized, Red Skull was then executed by Red Wasp, who at last got her vengeance for Red Skull's actions against her.

As of being born with the super soldier serum, Red Skull has all his father's enhanced abilities. He is able to overpower his father during his first fight with him, kill hundreds of soldiers without breaking a sweat and outrun motorcycles. The serum itself also slows his aging down as being 64, he still was fit as in his prime. 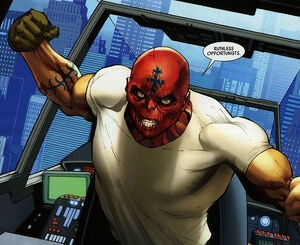 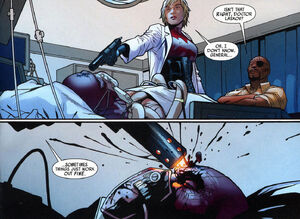