Chief of the Creeks

Wipe out all the U.S. soldiers (formerly).

Vengeful Warmonger
Red Stick is one of the three main antagonists (alongside Amos Thorpe and Santa Anna) of Disney's 1955 live-action film, Davy Crockett: King of the Wild Frontier. He is the chief of the Creeks who wages war against the U.S. Government. However, he redeems himself when he makes peace with Davy Crockett and decides to have a peace treaty signed to negotiate with his tribe.

He was portrayed by the late Pat Hogan, who also played the Ute Chief in Ten Who Dared, and Broken Nose in Savage Sam.

In retaliation enchroachment of U.S. settlement, Red Stick and his tribe started the massacre of Fort Sims in 1913, thus starting the Creek Indian Wars.

Major Tobias Norton informs Davy Crockett about Red Stick and he sets out with the army to find him with his sidekick, George Russel. Major Norton and his army take the warpath, while Davy and George take the other. The pair notice Red Stick and his warriors climbing up a hill and they immediately hide. Davy and George follow Red Stick and they arrive at his camp, where they spot him and his warriors performing a fire dance. They head back to inform Major Norton, but the soldiers find themselves under attack by the Creek warriors. The pair intervene and the warriors retreat back to their camp.

Davy returns to the fort and informs General Andrew Jackson about the attack, so they set out on their journey to find Red Stick. Davy and George subdue the guards and the army surrounds the camp. General Jackson orders his men to move in and the soldiers close in. As Red Stick realizes that they're being ambushed, the soldiers open fire and the warriors attack. George fights Red Stick, but the chief subdues him. Red Stick attacks Davy and they fight, but Red Stick manages to hit Davy on the head with his tomahawk, knocking him unconscious. One of the warriors tries to kill Davy, but George kills him. Red Stick leads his men to attack the soldiers and duck as they fire shots at them before attacking the soldiers. General Jackson calls for the army to retreat and Red Stick escapes.

Major Norton informs General Jackson about a peace treaty and that they capture three of the chiefs. Davy comes by and informs them that he will head home to take care of his family before he can capture Red Stick. As Red Stick continues attacking white settlements overtime, Davy and George head back to the fort and Major Norton informs them that Red Stick is hidden in a nearby swamp. Norton decides not to risk anymore lives, but Davy makes up his mind to capture him on his own.

They search the entire swamp the following morning and George notices a footprint. Red Stick and his warriors ambush George and knock him unconscious before taking him to their camp. Red Stick ties George to a pole and interrogates him to reveal his whereabouts, but George refuses to tell them, stating that he works alone. Before Red Stick could execute George, Davy arrives in the nick of time and stops them. One of the warriors tries to shoot Davy, but Davy kills him with his dagger.

Davy confronts Red Stick and tries to negotiate with him, but the chief refuses to listen to him. Davy decides to challenge Red Stick in a duel, to which Red Stick agrees. The two contestants are handed each tomahawk and the battle begins. Red Stick eventually manages to wrestle the axes out of Davy's hands and strangles him, but Davy manages to shake him off. Without any tomahawks left to duel Davy, Red Stick is given another tomahawk by one of his warriors. Davy starts to grin at Red Stick, but the chief angrily snarls at him. Red Stick swings his tomahawk at Davy, but the brave frontiersman dodges his attack and overpowers him. Red Stick surrenders and Davy orders him to turn George loose.

Davy offers Red Stick to join the other chiefs in the treaty in order for his tribe to live in peace and go back to their own lands. Red Stick brushes it off, saying that the U.S. Government always lies, but Davy assures him that he's always honest. Red Stick asks Davy why he spared his life, to which Davy explains that it's because of another law explaining that people shouldn't kill. Red Stick orders his warriors to set George free and he makes peace with Davy.

However, despite the Treaty of Fort Jackson, Davy Crockett's political rival Amos Thorpe plans to drive all the Native Americans out of their land and passes a bill to take over their lands. Davy arrives at Congress and argues against the Indian Removal Act, defeating it and ending Thorpe's career. 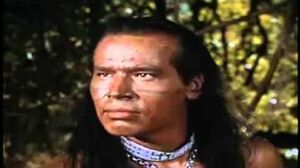