Tasting various milks and complaining about how terrible they are.

To persuade parents everywhere that TruMoo is unhealthy and disgusting, thus depriving children of calcium and other essential nutrients.

Villainous Liar
The Red TruMoo Man is the main antagonist of the TruMoo milk commercials. He is a villainous being who represents negative opinions of the Trumoo product, in other words, the living embodiment of negativity and disgust.

The Red TruMoo Man appears in all the TruMoo television commercials along with his positive counterpart, White TruMoo Man. The Red TruMoo Man's job is to provide the conflicted parent with reasons to hate and dislike TruMoo for being unhealthy and tasting bad.

Ironically, whenever he tastes the TruMoo for himself, he is reluctantly overcome with delight over how delicious it is to him. The parent then proceeds to pour a glass of TruMoo for his/her child, much to the Red TruMoo Man's dismay.

In one commercial in 2015 , he's the one who encorage the parents to serve the Trumoo chocolate milk, has the father was uncertain , but the white one encourage him to do it too. 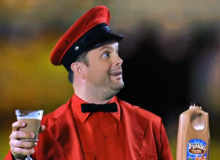 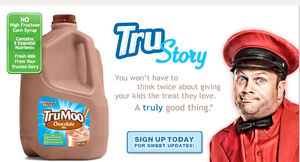 Retrieved from "https://villains.fandom.com/wiki/Red_TruMoo_Man?oldid=3552190"
Community content is available under CC-BY-SA unless otherwise noted.