Red Widow was the first of the assassins now common place to Arachnos known as Widows, she was one of the original members of Arachnos from before Lord Recluse's rise to power, a rise to power she had a bloody hand in.

Lord Recluse was not always the head of Arachnos nor the super villain he is today. Back when he was still calling himself Stefan Richter he had no greater ambitions than to use his powers to become richer through theft. After he was openly opposed by his friend Marcus Cole, also known as Statesman, Stefan's ambitions turned from self interests to bringing down the man he once called brother and to do that he decided to become a super-villain. In his new quest towards super-villainy Stefan bought his way into an Italian crime syndicate known as Arachnos. The leader at the time was a shadowy figure called Weaver One and the organization’s most highly trained assassin was a woman called Red Widow. Stefan was given the title 'Recluse' and with Arachnos's help Recluse took his first real strikes against society as a whole. Working with Arachnos Recluse and Red Widow eventually developed feelings for each-other. Eventually Recluse made a play for power and persuaded Red Widow to assassinate Weaver One, upon Weaver One's fall Recluse declared himself the new head of Arachnos and dubbed himself 'Lord Recluse'. Lord Recluse turned the small elite group into an army of doom and soon enough a world power with the conquest of the Rogue Isles from the former government of President Marchand all the while Red Widow remaining a loyal and effective right-hand.

The details of Red Widow's death remain somewhat sketchy as do many other details about early Arachnos, but at one point Red Widow was crushed in an avalanche caused by Statesman in a fight between the two arch-enemies. Attempts to save or revive her after the fact were made useless by the group of villainous mystics known as the Circle of Thorns, who forcibly ejected her soul from her body and stored her within one of the group's many soul crystals. Red Widow remained there for countless years and Lord Recluse has had the Circle of Thorns declared one of the primary enemies of Arachnos and one of the very few villain groups Arachnos will not negotiate with. As a testament to Red Widow's skill and loyalty Lord Recluse had an entire section of Arachnos trained in Red Widow's style of combat, the Night Widows. Ghost Widow herself was a Night Widow when alive and so she owes both her position and the existence of her employed organization to Red Widow. Eventually Ghost Widow found the crystal that housed Red Widow's spirit and had it stolen from the Circle of Thorns' lair. Ghost Widow intended to use Red Widow as a test subject for a ritual that was supposed to restore life to the dead, one she intended to use on her-self. The ritual worked but Ghost Widow promptly re-trapped Red Widow in her crystal for fear of being out-shinned by the original Widow of Arachnos. However Lord Recluse had Ghost Widow, like all his inner-circle, watched. The villain who stole the crystal for Ghost Widow (the player) was given a chance at forgiveness and even promotion if he/she/it recaptured Red Widow's crystal and sabotaged Ghost Widow's ritual as punishment. The crystal was given to Lord Recluse and Ghost Widow watched as her one chance to rejoin the living slipped out of her fingers forever.

For a long time this was the enigmatic fate of Red Widow. In 2012 however the game gained a new valentine's day  event. The player is given the chance to restore Red Widow; For Heroes this is a desired result because Red Widow was one of the only people capable of reminding Lord Recluse what love was; For villains this is a desired result because what is good for Lord Recluse is good for the Rogue Isles. There are no modern machine, medicines or technology that can both reconstruct Red Widow's long dead body or infuse her crystallized soul into a new one, so an archaic blood ritual needs to be used. After raiding Arachnos storage for the crystal and gaining the required spell and components the resurrection was preformed and Red Widow was restored to world of the living. However there are two side-effects to the potent yet primitive ritual, the first is Red Widow was overcome with hatred and bitterness from her long imprisonment and decided to take her anger out on the man who held her crystal and in her eyes "choose not to" resurrect her and so Red Widow took off on a mission to kill Lord Recluse herself. The second side-effect of the out-dated rite was that for a short time the resurrecter and resurrected life-forces are linked and if one dies the other does as well. Whether to try to rekindle the love that once was, maintain the status-quo of the Rogue Isles or just not be the target of Arachnos assassins, the player will go to stop the assassination. Being a Valentine's day event the player is given Eros's/Cupid's arrow and sent to go use it on Red Widow. Once the arrow was used the bitterness in Red Widow's heart melted away, she was able to see the world clearly again. She proceeded into Grandville all the same to meet with Lord Recluse, though not to kill him anymore but to talk. After a heartfelt reunion Red Widow managed to help Lord Recluse re-capture his priorities, Lord Recluse had long since simply wanted to destroy the heroes of Paragon city, now Red Widow had reminded him of why he started and what was truly important to him, not spite towards the forces of good, or acts of petty vengeance...conquering the world!

Lord Recluse pledged that he would focus less on spiting the forces of good and more on just aiming to take over the world. Though this event seems non-canon and just a holiday special Red Widow has since shown up with Lord Recluse in his grand stand against Tyrant and Lord Recluse's activities have been noticeably more cooperative with the heroes of Paragon such as defending earth against Praetoria's attacks and avenging Statesman; So it seems Red Widow had a lasting impact on the game's foremost Super-Villain.

Red Widow possesses the standard power set of all Arachnos Widows, which is heavily augmented psychic powers, combined with fighting prowess honed to super-superhuman levels and is equipped with wrist-mounted poisonous darts launchers. Red Widow may be far from unique thanks to the numerous Widows within Arachnos, however since Widow training was establish based on Red Widow's fighting style to begin with she is still considered a veteran without equal. It is also likely that, being Lord Recluse consort, Red Widow has cutting edge equipment putting her slightly ahead of most normal Widows and almost certainly is afforded high-priority if not complete lordship over Arachnos's Seer Network. 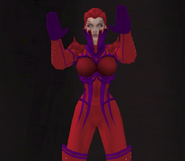 Red Widow joining in the Arachnos siege of Praetoria 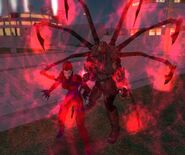 Red Widow and Lord Recluse combat duo.
Add a photo to this gallery

Retrieved from "https://villains.fandom.com/wiki/Red_Widow?oldid=3578332"
Community content is available under CC-BY-SA unless otherwise noted.