Do whatever he wants (as the second Red X).

Red X is a recurring character and anti-hero in the Teen Titans series. Originally an alias Robin used to get closer to Slade, an unknown person took up the Red X identity after stealing the suit and used it to become a professional thief.

He was voiced by Scott Menville who also voices Robin.

Red X's appearance is that of a person dressed in a completely black bodysuit that has a red-x placed right over his left pectoral muscle, an ash-gray utility belt with matching gloves that have red Xs on the palms and back of the hands, a pair of black boots with steel-soles and a black cape that has an ash-gray interior.

His mask consists of a white skull, which has no lower jaw, on a black full-face mask and a red x starting on his forehead and with a point of the x is ending beneath his right eye. The eyes are white reflective lens, which seem to act like Robin's mask as making facial changes to his actions, and are outlined in black.

The new wearer of this outfit is shown to be of similar built yet a couple inches taller than Robin.

Red X's personality is the one major difference between him and Robin. While Robin was Red X, he was even more serious than normal and kept his goal of capturing Slade as his top priority. The new X, however, is a thief who is "just looking out for number one", stealing purely for monetary gain. This Red X is revealed to be far less serious, finding his battle with the Titans amusing and voicing derogatory quips as he immobilizes them with his gadgets. He even flirts with Starfire, indicating that he and Robin both share similar tastes when it comes to girls though it might also be an example of his flippant sense of humor.

On the other hand, despite being a self-serving robber, he is not without heroic qualities. He rarely preforms acts of true evil and, when the time comes for him to use his powers to prevent disaster, he tends to rise to the occasion. In his initial appearance, in the episode "X", he ends up helping Robin against Professor Chang and freeing the rest of the Titans. Later, in "Revved Up", he enters the race for Robin's personal secret, but, after Robin saves his life, he repays the favor by taking out the other villains participating in the race and disappears right afterwards. Because of this, he has since become one of the most popular characters to have appeared on the series.

Red X started out as an evil alter-ego of Robin so he could get close to Slade and know about his plans. But in a later season, someone stole the Red X suit and decided to wear it and become a thief.

When the Teen Titans first encountered an army of Slade's robots, Robin want to figure out who he was, and what he was planning. So he created an evil alter-ego to figure out Slade, but in the process, Robin almost crossed the line between good and evil, and almost lost his friends.

After Robin quit being the Red X, the suit was never seen for some time. Until someone stole the suit and decided to wear the suit and become a thief. He only stole stuff so he could look out for what he considers as Numero Uno. But when Raven, Cyborg, Starfire, and Beast Boy were kidnapped by Professor Chang, Red X decided to help Robin take out Chang. But he only did this to steal the Xenothium to power up his suit. However Robin anticipated this so he managed to take Red X's belt. X manage to steal one tube of the Xenothium and used it to create a distraction and manage to escape from the Titans. Red X made another appearance, and became a member of Brain's Brotherhood of Evil. When Ding Dong Daddy manage to steal something precious from Robin. Because it was valuable to Robin, all the Teen Titan villains teamed up and tried to steal it from DDD, while preventing the Teen Titans from getting the Briefcase, including Red X. However near the end of the episode, Red X saw in Robin's eyes that it was really valuable to him and decided to take out the other villains that wanted the briefcase. What happened to Red X is unknown. During the fight between the Teen Titans and the Brotherhood of Evil, Red X wasn't spotted, it's likely that he left the Brotherhood after the Ding Dong Daddy race. 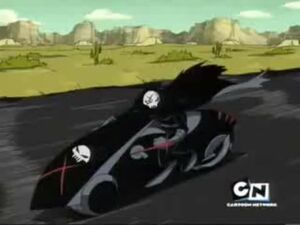 Red X riding on his bike 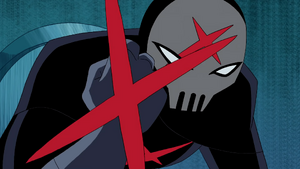 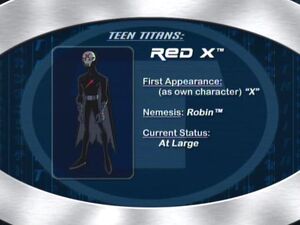