Tormenting and killing their victims.

Murder anything they find to ensure survival via dipping their magic hats in the blood of their victims.

Redcap is an extremely evil and murderous type of goblin that is frequently described in English folklore, especially around the Borders, an area of land that traditionally separated England and Scotland. The area was often disputed, and as a result, many souls were lost in the bloody battle between the two nations. The Redcap was said to either take advantage of this conflict or be born from it, haunting the ruins of the Borders these fairy folk would murder any mortal foolish enough to get in their path.

Redcaps frequently killed, indeed their existence depended upon it as their skullcaps were coated with blood that if dried out would kill the demons. Thus, the Redcaps had to frequently hunt and kill so as to dip their skullcap in fresh blood.

Redcaps often wore iron-boots and attacked their victims with iron pikes, yet despite their awkward appearance, Redcaps were said to be supernaturally fast to the point outrunning them was impossible for any mortal being. Due to Christian influence on folklore, the Redcaps developed a few weaknesses over time such as being able to be scared away via reading from the bible, though like most things the power of such prayers were probably based on individual belief on its effectiveness.

Redcaps from English folklore are very different from those found in other cultures and are notable more villainous, as other Redcaps tend to be relatively harmless unlike their Border cousins, the reason behind this may well stem from the violent history of the land they are said to inhabit.

In fact in some legends, Redcaps are the spirits of those who had been murdered in the Borders bloody history, or alternatively demons attracted by the conflicts (which claimed many lives from both sides of the Borders).

Redcaps are featured as an enemy for Dungeons & Dragons, retaining their behaviour from the tales people tell about them. However, their type is fey. Since their origin is bloodshed, these creatures can be considered undead. 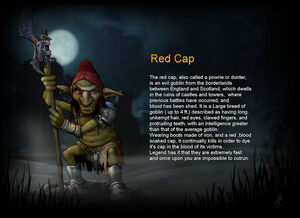 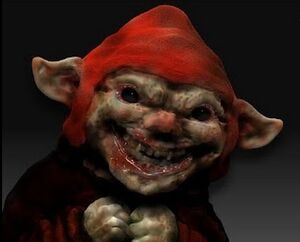 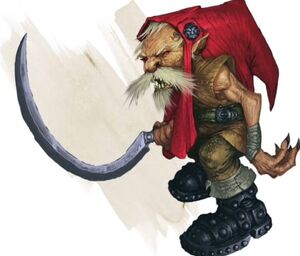 A Redcap in Dungeons and Dragons.