Redyue is one of the two main antagonists of Kamen Rider Gaim alongside Ryoma Sengoku. She is a Green Overlord Inves who is responsible for countless murders of the old civilization in the Helheim Forest, having targeted Japan next.

Redyue is the one tasked by Rosyuo with spearheading the invasion of the Human world, a role she is all too happy to carry out. Secretly though, Redyue plots behind Rosyuo's back to steal his Golden Fruit.

She was voiced by Kenjiro Tsuda, who also voiced Seto Kaiba.

DJ Sagara, as a hologram, approached the Overlords as he somehow knew their language. Later, when Gaim enters the ruins to search for the Overlords, they approach to her as Redyue speaks her language to Gaim, while Demushu fought the Armored Rider as Gaim tries to talk with them before they retreat.

As Demushu was wounded by Baron's attack, Redyue told the Overlord to retreat telepathically.

During Demushu's raid onto the place where Yggdrasill scientists are while searching for Baron, Redyue took one of the scientist's non-Blade cutting version of the Sengoku Driver belt.

After Demushu enters Zawame, Redyue approach to Sigurd and Zangetsu Shin as the Riders started to attack the Over Lord. Overpowered by the Riders, she surrenders and send Sid and Mitsuzane to the location of the Forbidden Fruit. Once in the ruins, after Sid leaves to search for the fruit, Mitsuzane already realized that she sets a trap, which led to Redyue developing an interest to the boy.

She went to Rosyuo as Redyue told him that she would aid Demushu, which he accepts. She took Sid's hat from Takatora as she gave it to Mitsuzane, telling him that they need a different plan to steal the Forbidden Fruit. While walking, Inves started to follow them as Redyue reveals to Mitsuzane that she wants to live somewhere that has light and noise once she has the Forbidden fruit in her hands. Redyue opens the Crack, which have the Helheim's plants invade Yggdrasill Tower, meaning that the company would be helpless.

Redyue later shows a vision of Kouta's future, where he becomes the Byakko Inves instead of Yuya. She continued to torture and threaten Kouta into joining her forces, but Kouta managed to resist her hypnosis as she fled.

Redyue then betrays Rosyuo as he leaves himself wide open in a battle against Kouta and Kaito. Realizing that Rosyuo gave someone else the Forbidden Fruit, she kills him in a ruthless manner before encountering Kouta, who uses his Over Lord powers to regenerate the Kachidoki Lockseed before being destroyed by Gaim Kiwami Arms.

Unlike Demushu, Redyue is more calm, devious, and calculating. She also rarely picks a fight and chooses to attack enemies passively. As shown, she lets Demushu fight Kouta, while she herself just only assaults Kouta with his sonic waves. She also likes to learn new languages, like when she learned Japanese. However, Redyue also has a very dark personality. She likes any type of entertainment and will do nothing when she sees a form of entertainment. As shown, she just did nothing when Kouta was beaten up by Demushu. She viewed Kouta as a "toy" sent for their amusement and although she spared him, Redyue just wanted to see Kouta entertain them more the next time they meet. Like her human Rider counterpart from Earth, Mitsuzane, she is also very duplicitous and manipulative, especially up to something in obtaining the Forbidden Fruit from Rosyuo behind his back, using people like Sid to do her dirty work.

Though not much is known, but so far Redyue possessed the ability to emit powerful sonic waves which inflicts tremendous pain at the target, using the kinetic backlash of the wave's force or affecting their hearing, making it even worse for Gaim when donning the Jimber Peach Arms since it grants him superhuman hearing. She also can open a Crack anywhere she wants or even reopened a closed Crack, such as Yggdrasill's Sacred Tree's Crack. However, just like Mitsuzane, she doesn't want to battle the opponent head-to-head and prefer to backstab them from behind. 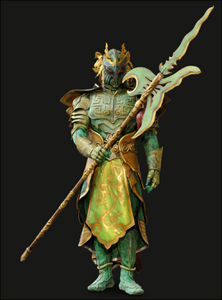 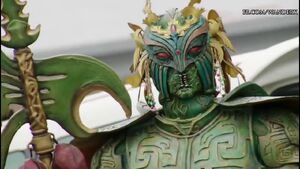 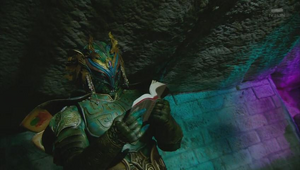 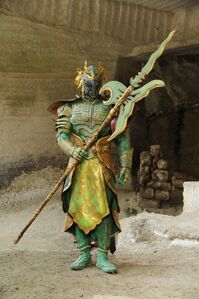 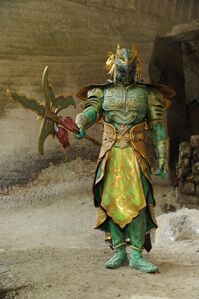