Kill all of Creech's family

Reece Tenneson is the main antagonist of the 2017 Nickelodeon film Monster Trucks. He is the ruthless, cruel, greedy and ambitious CEO of Terravex Energy.

He was portrayed by Rob Lowe, who also played Guy LeFranc in Super Troopers 2, Benjamin Oliver in Wayne's World, and Paul Barish in Tommy Boy.

Reece Tenneson First appears in the beginning of the film when he arrives at the Terrevex Energy drilling site due to being informed of a large underground lake being in the way of the oil which causes the company to check for sings of life by drilling into the lake which releases some pressure and some of the creatures that live in the lake, The creatures and the life in the lake would require the company to shut down the drilling operation so Tenneson orders Burke to take to the company and the creatures and the lake itself to be kept a secret. However a teenager named Tripp Discovers one of the creatures which evaded capture by hiding in a wrecked truck that was towed to the junkyard Tripp works at, Tripp names the creature Creech. However Burke soon locates Creech at the junkyard which results in Creech, Tripp and his tutor Meredith having to drive away in a 1955 Dodge C-3 truck. Burke sees the old truck leaving and he orders his men to follow the truck. Tripp, Meredith, and Creech hide in the lush vegetation to avoid being seen. The Terravex trucks then drive by seeing that there's no sign of the trio or the truck.

The next day, Burke and his team arrive at the Terravex camp where Tripp's dad Wade is staying. Burke notifies Tenneson about this. Wade tells Tripp the mercenaries want the Dodge C-3 back but Tripp refuses to give it to them because he built the truck. One of the crew men grabs Tripp which makes Creech very angry. Tripp gets free from the crew man and tells Meredith to get back in the truck. Burke approaches Tripp with his shock rod telling him that he will hurt him if he doesn't give up Creech and the truck. Then, Creech spins the C-3 into a doughnut kicking up a lot of dust which buys Tripp enough time to get in the truck. After the doughnut stops, Tripp drives towards Wade's trailer causing Burke and his crew to hit the dirt before the truck bursts through the trailer and leaves the camp. Burke and his crew get in their Terravex trucks and then begins to chase the heroes through the town. Tripp tries some features to outrun the mercenaries and stunned Burke as he has never seen the creature do anything like that. The team chase Tripp and Meredith all the way to a train crossing where Tripp manages to escape the Burke by jumping the truck over one of the train cars.

Tripp, Meredith, and Creech take refuge at a camp owned by Merediths father to rest and hide from the mercenaries. The next day, Tripp and Meredith awake to find that Creech and the Dodge C-3 are missing. It later shows that Creech followed the Terravex tractor trailer which was taking his mother to the Terravex headquarters. Tripp and Meredith arrive at Terravex headquarters and sneak in to find Creech, Instead, they find two more similar creatures in boxes which happened to be Creech's parents. The two then see Creech breaking in trying to save his mom and dad but Burke and his team interfere and tranquilize Creech. Tripp and Meredith are taken to Tenneson's office where Tennseson deletes the Tripps pictures of himself and Creech from his phone then threatens to send Burke after them again if they try to stop his plans again. Burke leads the two out and Dr. Jim Dowd comes in and states that he will be the one to escort the teens out. Dowd later explains he wants to be on sides with Tripp and Meredith because he's had enough of doing bad things for Terravex and Tennseson and wants to save the creatures including Creech. Tripp and Meredith agree with Jim and they go to find two more trucks.

Getting Ready For The Big One

The two teens soon arrive at Weathers' Junkyard and Tripp tells his boss Mr. Weathers he needs two acquire more trucks to get ready for their plans. Mr. Weathers agrees to help Tripp and said there's one truck that's on the repo list. The truck is a green 2013 Ram 1500 with custom decals, off road mods, fender flares, and two exhaust stacks on the bed. The truck belongs to a snobby, rich teenager who failed to make his payments. The rich teen is in his house playing video games with his girlfriend during the evening. The girl looks out to see Tripp hooking up her boyfriend's truck. Instead of trying to stop him, the girlfriend waves hello to Tripp while her boyfriend was concentrating on his game. The three soon leave and head over to the car dealership where Tripp's friend, Sam Geldon is closing up the dealership which is owned by his father. Sam tells Tripp and Meredith there's one truck they can use. The truck is a brand new red 2016 Ram 1500 Rebel; which was going to be Sam's 16th birthday present. Tripp believes there's no harm getting an early peek and starts getting work on customizing the Rams including the Dodge C-3 which was saved at Weathers' Junkyard. Meanwhile, Dr. Jim feeds the two creatures and tells them to get ready for a little road trip. The teenagers work all night customizing the trucks and by morning, the Rams were ready.

At Terravex Headquarters, Dowd steals the big rig containing the two creatures and takes them to the car dealership where Tripp is waiting. They unload the trailer and release Creech and his parents. Creech is reunited with Tripp including his mother and father who missed him very much. The three creatures get in the custom trucks as well as Tripp, Meredith, and Dowd and prepare to take Creech home. However Burke soon learns about Dowds actions and notifies Tenneson of this. Burke arrives at the dealership to discover only Sam is there and there's no sign of the creatures or the trucks.

The three trucks begin driving through open farmland where Burke and his team chase them through the woods and into the mountains. Meanwhile, Tenneson who is in a company meeting is quietly talking to Burke who keeps him updated on the Tripp and the group. Meanwhile Tripp spots the tanker up ahead and Dowd informs that Tenneson is going to poison the nest.

Tripp and the group manage to stop the poison from reaching the lake by winning a pushing match with Burke which ended with his truck destroying the poison pump after being flung by Creech and Tripp, causing a big poisonus leak, leading up to Burke's death as his truck fills with poison and can't escape due to a piece of machinery blocking the door, and in the process Terravex ends up being exposed with Burke's death, Reece is arrested for his crimes, much to his dismay. 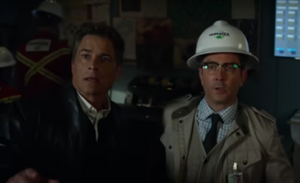 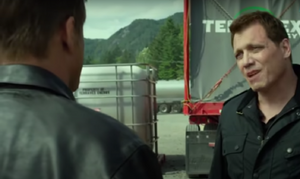 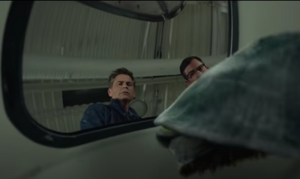 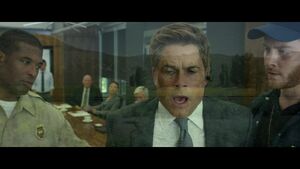