He was portrayed by Christopher Walken, who also played Max Shreck in Batman Returns, Frank White in King of New York, Vincenzo Coccotti in True Romance, Gabriel in The Prophecy, Max Zorin in A View to a Kill, Bradford Whitewood Sr. in At Close Range, The Headless Horseman in Sleepy Hollow, Salvatore Maggio in Kangaroo Jack and Cornelius Hatcher in The Rundown, and also voiced Colonel Cutter in Antz and King Louie in The Jungle Book.

Reed is first seen visiting Country Bear Hall; tormenting Henry Dixon Taylor about the Hall's twenty-thousand dollar payment and fate, which is due to occur in four days to come. When he sees Beary Barrington paying 25 cents for a tour of the Hall, he sarcastically replies: "Oh, like that's gonna help." and then leaves while snickering. The next day, Reed notices Big Al hammering a sign for a reunion benefit show. Big Al naively tells him about Henry's plan but when he realizes that he is talking to Reed Thimple, he has Reed look in one direction. By the time Reed looks back, Big Al is on the steps of Country Bear Hall stating "I'm chubby, but I'm quick." Later, he seen enjoying himself in his office; destroying wooden models of Country Bear Hall with a wrecking anvil and its remote. Then, he is seen talking to a demolition expert about how to destroy the Hall. Reed kidnaps the Country Bears minus Roadie, "Mr. Chicken", Ted Bedderhead, and Beary and steals the bus. Reed Thimple reveals to the Bears that he is actually Benny Bogswaggle; a once fifteen year old armpit musician who lost a talent show to the Country Bears which caused Benny to hit Zeb Zoober on the head with a chair thirty years ago, and is wreaking his vengeance on the Bears for stealing his one chance at fame while locking them up in a cage. After the Bears are rescued by Ted, Beary, his family, and Roadie , they get to Country Bear Hall only to find out that Reed Thimple has paid Rip Holland not to promote the show, so the concert appears to be headed for failure. Rip even explains his reasons involving business with him ending with the fact that some of it was Reed Thimple's idea. As the other Country Bears restrain Henry from attacking Rip, Big Al arrives and asks if the Country Bears are doing their show tonight. When Fred Bedderhead states that nobody showed up, Big Al reveals that everyone was just out in the back field and that he didn't want anyone parking out on the front lawn. Big Al then opens the doors and a surge of people rush in as Reed Thimple is flushed out vowing to the Country Bears that their feud isn't over. 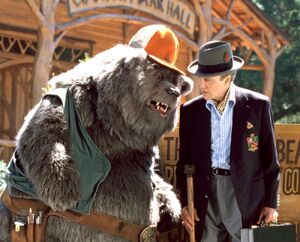 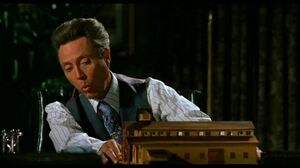