Writing equations all over Minerva's Den.

Keep the Thinker to himself at all costs.

Reed Wahl is the main antagonist of BioShock 2's DLC campaign Minerva's Den. Alongside his former partner Charles Milton Porter, he co-founded one of Rapture's most fundamental technology services in the city, Rapture Central Computing, and co-invented the Thinker, a supercomputer able to process data at the speed of human thought. Angered at Porter for wasting the Thinker's potential, Wahl framed Porter as an associate of Frank Fontaine and turned him over to Andrew Ryan so he could keep the Thinker to himself. However, Wahl was driven insane by constant ADAM abuse in the process, turning him into the paranoid, equation-obsessed governor of Minerva's Den.

He was voiced by Keith Szarabajka, who also played Cornelius Slate in BioShock Infinite.

In Porter's own words, Reed Wahl was once a gifted and hardworking engineer who worked well with Porter during their time together in Rapture. Despite this, Wahl disagreed with Porter's use of the Thinker by the time they invented it: while Porter tried to replicate the personalty of his dead wife, Pearl Porter, Wahl saw more practical and financial uses for the Thinker, using it for a money-grubbing scheme to predict stockprices and the outcomes of sports games. Over time, he grew more resentful of Porter "wasting" the Thinker and eventually wanted him out of the picture by incriminating him as an ally of Frank Fontaine, who Andrew Ryan condemns as a criminal.

Once Wahl was in full control of Minerva's Den and the Thinker, he indulged in ADAM and fell victim to much of the splicing going on in Rapture. Due to splicing, Wahl became irrational and rabidly obsessed with keeping the Thinker to himself, and went as far as to cut Minerva's Den off from the rest of Rapture so that no one else could steal it from him. Wahl came under the delusion that the Thinker could solve a perfect equation which could predict everything, resulting in him decorating the walls of Minerva's Den with his equations using paint and blood in an effort to discover it. Wahl's sanity became so broken that he was paranoid that Porter would eventually come back to take the Thinker away from him and proved multiple times that he would kill anyone who tried to.

Almost nothing is known of Reed Wahl's past before his arrival to Rapture aside from his bright mind and experience for engineering, mathematics and technology. He eventually became acquainted with Charles Milton Porter and together, while under Andrew Ryan's employment, they founded Rapture Central Computing. The company was responsible for maintaining and providing many of Rapture's computing services and inventing new technology within the city. However, the most notable piece of technology in Rapture Central Computer's headquarters, Minerva's Den, was the Rapture Operational Data Interpreter Network, a supercomputer invented by both Porter and Wahl, which would later come to be known as "The Thinker".

The Thinker's technology was advanced enough in that its purpose is to calculate data at the speed of thought and essentially could "think" for the population of Rapture. In his off-hours, Wahl did several experiments with the Thinker, using it to predict the outcomes of baseball games and was left fascinated by how accurate the device is in predicting these outcomes. Seeing it as a "money-making grail" for Rapture, he then went on to use it to predict stockprices for financial interests. Porter, on the other hand, privately used the Thinker for more personal reasons: he fed recordings of his wife Pearl Porter, who had been killed in the London blitz, to the Thinker for the machine's personality duplication function in order to replicate her personality. Having listened to Porter's experiments and perceiving him as turning the Thinker into a person, Wahl disliked his way of using the machine and saw much more potential in the Thinker for practical and business purposes.

As time went on, while Wahl became more and more tired of the way Porter uses the Thinker, he noticed the rising tensions between Andrew Ryan and his business rival Frank Fontaine. Knowing that Ryan perceives Fontaine as an enemy to Rapture, Reed Wahl takes full advantage of the situation and decides that it is time to find a way to "implicate" Porter as a traitor so he can use the Thinker properly without Porter's interference. Wahl uses the Thinker's personality duplication function to record a fake message of Porter's voice swearing loyalty to Fontaine and shows it to Ryan himself. Due to the perfect imitation of Porter's voice from the Thinker, Ryan is fully convinced that Porter is a traitor and has his security forces detain Porter. Ryan then leaves Wahl in charge of Minerva's Den and the Thinker, while Porter is incarcerated in Persephone.

Throughout this time, Wahl had begun indulging in ADAM like many other citizens in Rapture. Specifically, Wahl had been taking Brain Boost gene tonics to enhance his overall intelligence to help him collaborate with the Thinker better. However, this has resulted in Wahl suffering from insomnia, memory loss and his sanity slipping overall. It is within this time that he becomes entirely focused on one of his previous theories: that the Thinker can provide a "predictive equation" that can foretell any events that could ever happen and sought to crack the equation. He scrawled equations all over Minerva's Den with paint and eventually blood in hopes of solving it. Wahl's splicing and efforts to solve the predictive equation inevitably drove him insane. Completely obsessed with the power he has over the Thinker and paranoid that Porter may come back, Wahl cuts off Minerva's Den from the rest of Rapture at an unknown point in time so that no one can take the Thinker away from him.

By 1968, Reed Wahl still remains in charge of Minerva's Den, even while Rapture is under Sofia Lamb's leadership. Although Minerva's Den remains relatively untouched by the bulk of the Rapture Family, the Thinker's existence draws the attention of one of Rapture's former scientists, Brigid Tenenbaum, who seeks to rescue more Little Sisters from Rapture and find away to cure the "ADAM sickness" with the help of the Thinker. To save the Little Sisters there and take the Thinker from Wahl's grasp to ensure a cure for the ADAM sickness, Tenenbaum reactivates an Alpha Series known as "Subject Sigma" with the help of Porter and sends him to Minerva's Den.

Wahl realizes that Sigma is approaching Minerva's Den in advance with the Thinker's help, to which the Thinker equates that a catastrophe will strike in the equation should Sigma reach the Thinker's core. Just as Sigma is about to enter, Wahl has the tunnel leading to Minerva's Den rigged with explosives and uses a rocket security bot to destroy the tunnel, letting Sigma flood out. After Sigma regains conscience, he is contacted by Porter, who begins to guide him through Minerva's Den. Wahl correctly assumes that Subject Sigma is working for Porter and tries to do everything in his power to stop him from reaching the Thinker, sending swarms of splicers to kill Sigma and taunts Sigma throughout his journey, noting that the Thinker can predict every single action Sigma makes. As Sigma continues to power himself up with plasmids throughout Minerva's Den, he finds many of Wahl's maniacal equations throughout the building.

Once Sigma gains access to the Operations portion of Minerva's Den, Wahl begins to send Houdini Splicers after Sigma and even tries to stop Sigma by himself. While following Porter's instructions, Sigma fetches a signal beacon from a crashed bathysphere for him to use to ward off Lamb's torpedoes once he finds a way to escape Rapture, much to Wahl's amusement. Just as Sigma makes his way back into Minerva's Den through the ocean floor after retrieving the signal beacon, Wahl tries to ambush Sigma by setting up a pair of rocket turrets by the airlock leading back into Operations and locks the door on his way out. Sigma makes his way past the turrets regardless, either by hacking them or destroying them, and continues his journey. After Sigma and Porter hack the beacon and turn into a signal jammer, Wahl becomes more anxious of Sigma getting closer to the Thinker's core. In retaliation, Wahl begins to send multiple Alpha Series Big Daddies after Sigma and sends the climate control system into overdrive just as Sigma is about to reach the entrance to the core, freezing a large portion of Operations and sealing the entrance to the core with ice. Despite this, Sigma reactivates the climate control system after fighting off swarms of Wintry Houdini Splicers and Alpha Series and makes his way to the Thinker's core to confront Wahl.

During Sigma's journey, Reed Wahl had made one final discovery amidst his countless equations: he realizes that Subject Sigma is actually Charles Milton Porter, who had long been turned into a Big Daddy ever since he was sent to Persephone. He also realizes that the Thinker itself had reactivated Subject Sigma and has been guiding Sigma throughout Minerva's Den by imitating Porter's own voice to be more of a comforting guide. Regardless of Wahl assuming that the Thinker is conspiring against him, he chooses not to give up so easily, even if the Thinker turns against him.

Sigma is bombarded by Wahl's splicers the moment he enters the Thinker's core, but manages to dispatch them before coming across Wahl himself. With not much strength left supporting him, Wahl has sabotaged the main path to the Thinker, forcing both Sigma and Wahl to head through the maintenance access shafts. Sigma chases Wahl throughout the tunnel, while Wahl tries to ward him off by throwing out mini-turrets and setting up a larger turret while he is on his way to the Thinker. During this time, Wahl tries to jog Sigma's memory by reminding him that Porter mysteriously reappeared after being locked away in Persephone, something which is unlikely to ever happen. He further warns Sigma that he will only have himself to blame once he finds out the truth. Sigma soon finds Wahl's equations showing connections between himself, Porter and the Thinker and listens to an audio diary of Porter discussing that he will likely become a Big Daddy shortly before his arrest. Sigma then finally enters the Thinker's core itself.

With the Thinker deactivated in order for Sigma to receive a copy of the Thinker's programming, Minerva's Den begins to fall apart. Behind bullet proof glass, Wahl confronts him and refers to Sigma directly as "Porter". He tells Sigma that he and Sigma are the only two variables left in the equation until it ends and challenges Sigma to a fight. To start off with, Wahl sends a swarm of Alpha Series to kill Sigma and sets up a turret nearby to ambush him. Once Sigma kills the rest of the squad of Big Daddies, Reed Wahl decides to fight Sigma himself while taunting that he was the one who backstabbed him and is the one responsible for turning Porter into a Big Daddy. Armed with a shotgun, electric buckshots, mini-turrets and accompanied by electrical security bots, Wahl fights Sigma in a battle to the death to see who will keep the Thinker. After an arduous battle, Porter finally gets his revenge on Reed Wahl, killing him with his assortment of weaponry and plasmids, taking the Administrator Punchcard off his body and using it to reactivate the Thinker. Upon realizing that he is Porter, Sigma collects a copy of the Thinker's programming and prepares to leave Rapture with Tenenbaum. 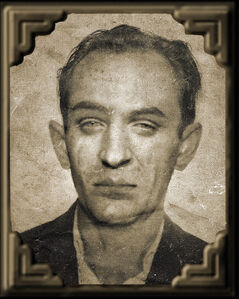 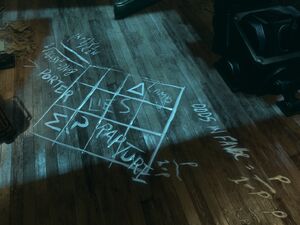 One of Wahl's many equations. 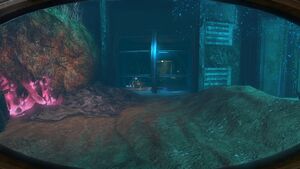 Wahl setting up a turret to ambush Sigma. 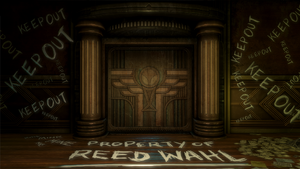 The entrance to Reed Wahl's office. 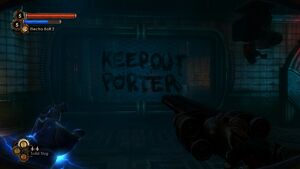 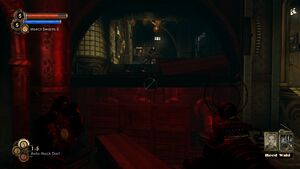 Wahl running away from Subject Sigma. 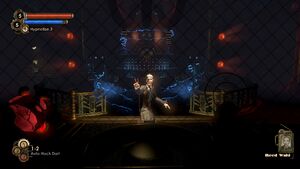 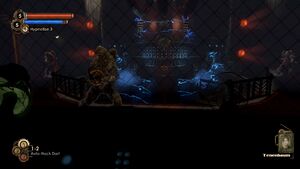 Wahl begins the final battle by sending a swarm of Alpha Series to kill Sigma. 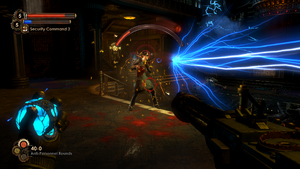 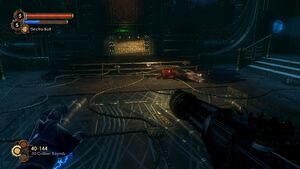 Reed Wahl's corpse.
Add a photo to this gallery

Retrieved from "https://villains.fandom.com/wiki/Reed_Wahl?oldid=3932716"
Community content is available under CC-BY-SA unless otherwise noted.