Using others in their "tricks".

Use the outbreak to find survivors and use them in their "special acts" to save their career (failed).

Reed Wallbeck and Roger Withers, known together as Magicians, are one of the bosses or psychopaths in the 2010 video game Dead Rising 2 and its remake Dead Rising 2: Off The Record. They are also optional bosses found in the main mode 72 Hours, who you can meet for the first time on the 4th day at midnight in the theater at Atlantica Casino in the side quest "World's Most Dangerous Trick". They are a pair of professional magicians working in the theater at Atlantica Casino, who lost their minds due to the zombie outbreak and decided to perform the most dangerous trick in the world, which means cutting a woman in half. Therefore, they kidnapped a girl named Madison Lainey as their volunteer to cut her in half with a giant saw.

In Dead Rising 2: Off The Record, the role of Reed and Roger as bosses is the same as in Dead Rising 2. They are voiced by Alessandro Juliani (Reed) and Matt Leigh (Roger).

Reed Wallbeck and Roger Withers, just before the zombie outbreak, were famous magicians and illusionists in Fortune City where they performed their magic and illusion performances in the theater at Atlantica Casino and their posters could be found all over the city. However, due to the zombie outbreak, they both went insane and decided to perform the most dangerous trick - so they kidnapped a young girl named Madison Lainey to perform the latest trick on her.

At midnight on September 28, Stacey calls Chuck telling him that she noticed that there were some magic shows going on at the Atlantica Casino theater because she had seen flashes of fireworks. Stacey tells him to check it out because it's a very strange time to do magic shows. Chuck Greene goes to the Atlantica Casino and enters the theater where he sees Reed and Roger doing tricks, or rather their trials and failures. Reed scolds Roger for his stupidity in performing "tricks" and orders him to prepare for the next trick. Reed announces that it's time for the next show to make them famous but need a volunteer first. After a short while, Roger uncovers a sheet from the table revealing Madison Lainey strapped to the table. Reed announces that they have a volunteer, and it's time for the most dangerous trick the world has ever known - cutting a woman in half. Roger starts a huge saw above the table and it quickly and brutally cuts Madison in half, killing her on the spot. Reed is furious that they have failed the trick yet again, signaling that a pair of magicians have killed more women. Chuck intervenes, saying it's no magic and Madison is dead. Clearly irritated, Reed adds that no one here asked him to criticize their show attempts, adding that they are professionals. Reed assumes that Chuck only came to make fun of them, so he orders Roger to bring him his giant rocket launcher, adding that they will both perform a trick in which Chuck will disappear once and for all.

After the fight, the defeated Reed and Roger lie on the stage in the theater. Roger slowly begins to crawl towards Reed, checking to see if he is alive. Chuck, clearly disgusted, slowly turns his head, but suddenly sees Roger pull out a dagger and start ramming Reed chaotically in the chest. After killing Reed, Roger confesses that he always wanted to do it and dies.

Reed Wallbeck is the main magician. Reed is one who does most of the talking. When a magic act goes wrong he loves to talk down to Roger. His main weapon is a rocket launcher. Reed is shown to rely on long-range combatant and is fairly slow. At the end of the boss battle Roger ends up stabbing Reed multiple times, killing him.

Roger Withers is the short, and clumsier magician who is continuously talked down by Reed. His main weapons are two magician swords. Roger relies on short-ranged combat, and is also shown to be much faster than Reed. At the end of the boss battle, Roger, tired of all the ridicule, grabs a knife and stabs Reed to death. Just before Roger succumbs to his wounds, the last words (as well as the only words) he said were; "I always wanted to do that." 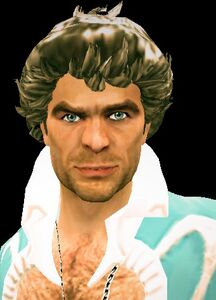 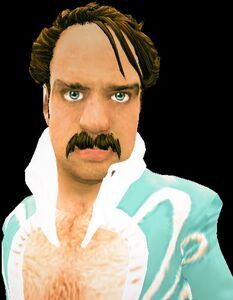 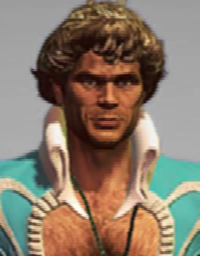 Photo of Reed in Chuck's Notebook. 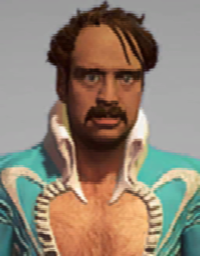 Photo of Roger in Chuck's Notebook. 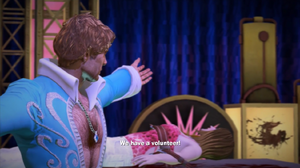 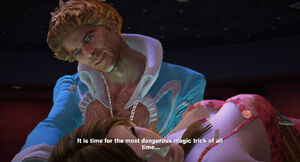 Reed telling Madison, that it's the time for the most dangerous trick. 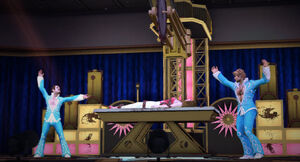 Reed and Roger ready to cut Madison in half. 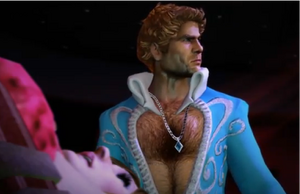 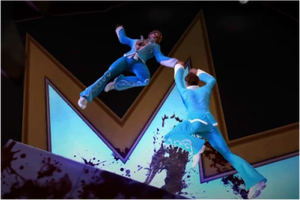 Reed and Roger dying together. 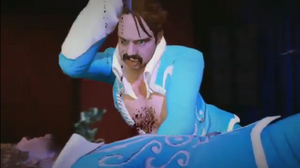 Roger stabbing Reed in the chest. 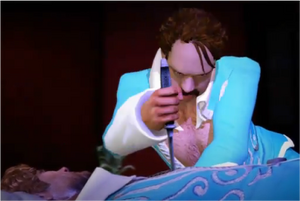 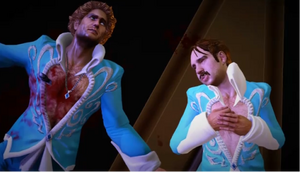 Death of Reed and Roger. 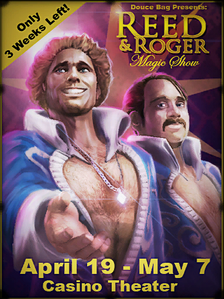 One of the posters with Reed and Roger in Fortune City.