Reagle is a raven-eagle hybrid and an alchemist. He specializes in making fake chi that makes the users act like birds.

Before the events of the series, Reagle was born to an eagle father and a raven mother, yet he grew up as an outcast as neither tribe would accept him for his appearance and inability to fly. For years, he tried to modify his body using his technological ingenuity but he was still unable to fly. Over time he turned twisted and cruel, and decided if he could not become like the other tribes, he would make them like him. He soon discovered a way of making artificial Chi, but with one small difference: the fake Chi would cause whoever uses it to act like birds. Soon the Ravens adopted the term for this fake Chi as "Reagle's Chigle".

In "Fake Chi, Real Trouble" Reagle is visited by Crooler seeking a way of controlling Cragger as she had no more Persuasive Plants left, but Reagle called the plant "overgrown fungus" and offered Crooler something "more interesting", pulling out his fake Chi. Later Crooler takes Cragger to see Reagle and he shows them both how to make them, and Cragger decides to distribute to Chi to all the tribes, much to Crooler's protests. But when they give some to the ravens they explain all about Reegle's Chi. They soon discover that side-effects of the Chi make the user act like a bird. Cragger then angrily confronts Reagle questioning why he did such a thing and Reagle then reveals his past to Cragger and that he wanted to use the Chi to create an army of birds. After all the fake Chi is recovered and disposed of, Reagle is later captured and sentenced to the Outlands for his crimes against Chima by Cragger and Laval, who strap bellow plants to his back. As the wind takes him into the Outlands, he is overjoyed that he finally got the chance to fly before the bellow plants wear off and he lands.

In "This May Sting a Bit" In a flashback by Lavertus, it is shown that Lavertus and Queen Crunket were a couple when they were young. Crominus was jealous of this and so he went to Reagle for Persuasive Plant seeds to control Lavertus' mind, First making him stay away from Crunket and then making him steal Chi from the Sacred Pool of Chi. This got him exiled to the outlands, leaving Crominus to marry Crunket.

After the Great Illumination, Reegull was turned good and was allowed back into Chima, along with the other Villains and set up snowflakes using Rhinos' money for Christmas. 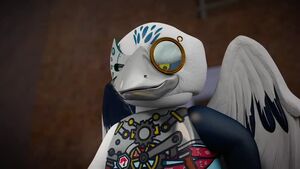 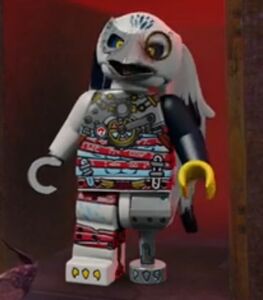 Add a photo to this gallery
Retrieved from "https://villains.fandom.com/wiki/Reegull?oldid=3460276"
Community content is available under CC-BY-SA unless otherwise noted.