Fighting strangers that come to the Desert of the Knaarens, and other Knaarens in the arena.

Take his revenge on Rayman (failed).

Reflux is the secondary antagonist and the final boss in Rayman 3: Hoodlum Havoc.

He is the champion of the Knaaren monster race, who Rayman is forced to fight in an arena after being captured in the Knaaren dungeons. Reflux wields a magical staff that can create yellow blasts of energy, and while a very powerful boss is actually the only Knaaren in the game who is not completely invincible; though this was most likely a simple gameplay design choice.

He was voiced by Ziggy Marley.

When Knaarens capture Rayman, their king Gumsi forces him to fight Reflux in the arena. After defeating him, Rayman is declared the new champion and blessed with a power that allows him to turn Black Lums into Red ones. Shortly after that, Rayman and Globox reach some Teensie doctors who are finally able to remove André from Globox’s stomach, but André escapes before Rayman can use his new power on him and finds the ashamed Reflux, and forms an alliance with him to get revenge on Rayman.

When Rayman next meets Reflux, he is the last obstacle guarding Andre atop the Tower of the Leptys, where he has evolved into a monstrous version of his original self through dark magic. When defeated in this form, Reflux mutates again into a gigantic, even more monstrous form. The tower then begins falling apart and Reflux floats in the air as Rayman climbs up to his head on broken pieces of the arena and shoots a rocket at him, only for Reflux to return again, grow wings and fly away. Luckily, Globox arrives in the flying vehicle used earlier and picks up Rayman, and they use it to shoot Reflux until his body starts releasing Hoodlums, and eventually crystalizes and explodes.

When it is revealed that some of André's spirit is still in Globox's stomach, André turns Globox into a clone of Reflux and Rayman has to fight him. Humorously, before their fight, Reflux calls Rayman "Ray-moron". The clone earns more power after he drinks from a barrel of plum juice, making him available to make purple energy orbs to attack Rayman. When Rayman defeats the clone, Globox reverts to his normal self and André's spirit flees. 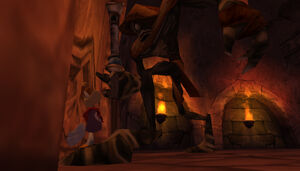 André convinces a dishonored Reflux to help him. 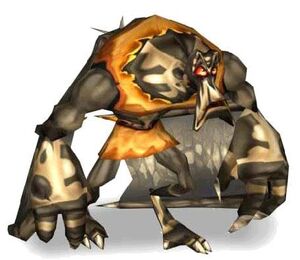 Reflux after mutating by the power of Leptys 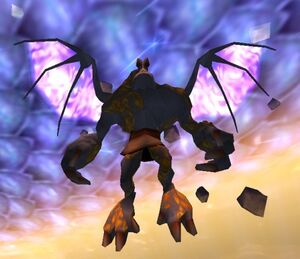 Reflux after growing bigger and sprouting wings through the power of Leptys.